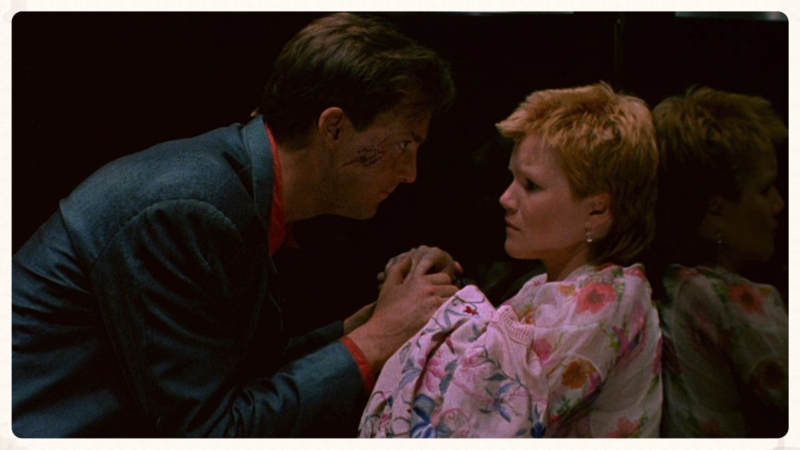 Closing the book on Miracle Mile

by Walter Chaw I set down in California for the first time since I was there for a cup of coffee at the Eternal Sunshine of the Spotless Mind junket a little over a decade ago. I had flown into Riverside, where my sister and her husband live. A lifetime of living in Colorado made me confused when a mountain range right outside the airport indicated east rather than west. It was hot. It was February.

I was in town for four days, there at the request and by the good graces of Steve De Jarnatt, writer-director of Miracle Mile, about which I had published a monograph in 2012. The plan was that I would record a commentary track with him for his feature debut, Cherry 2000, on my second day--and one for Miracle Mile on the third. In the downtime between, I had made plans to meet with filmmaker Walter Hill for a book I'm writing on his career. I also wanted to spend time with my sister and brother-in-law, have breakfast with a dear friend, and, maybe if I had a minute, swing by the actual Miracle Mile and do a pilgrimage-to-Mecca sort of thing. And I wanted a program from and picture of the New Beverly. It promised to be a busy couple of days. 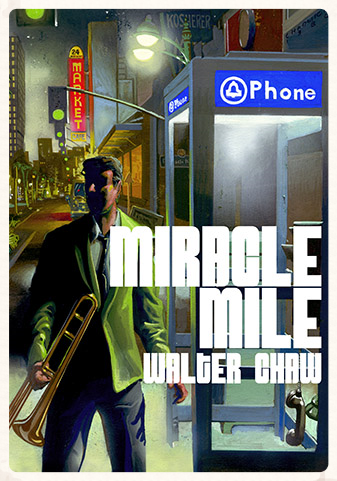 There were a lot of inciting incidents that led to my writing the Miracle Mile monograph. Most of them had to do with needing to confront, however belatedly, the summer I tried to kill myself in high school. It's one of those things that seems operatic and grand in the moment and embarrassing in hindsight. Though never much of a drinker, I think I know what morning-after regret feels like. More, I saw the book as an opportunity to make some kind of peace with my late father.

I wrote the first draft in something of a fever over just a few days. My editor, Bill Chambers, teased out the themes buried in there. I had him read it as a friend. He saw in it something that could be shared with and perhaps valuable to others. I'm grateful to him for thinking so. I'm grateful to Steve De Jarnatt as well for participating in the writing of the book and then, when Miracle Mile was picked up by Kino for remastering and release on Blu-ray, asking if I'd do the audio commentary with him. A project that was essentially a solipsistic therapy session had become something larger than that. "Surreal" is the word. "Existentially displacing" works, too.

Canter's Deli is mentioned in Miracle Mile. It's the place where the grandfather played by the great John Agar wants to go to have his last meal, so it's the place I wanted to go to meet my friend Will for breakfast. I had something huge, with a side of potato cakes. We talked about his recent relocation to L.A. and how amazing it was to be surrounded by people who knew something about film. I wondered what that was like. In my personal life, I'll sometimes go weeks without talking about movies with anyone in any meaningful way. I wondered for not the first time what it would be like to move to L.A., where the thrift-store bookshelves are full-to-bursting with industry tomes and well-thumbed copies of Goldman and Field. 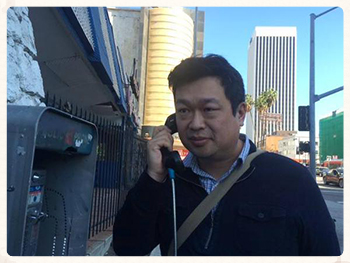 After, visiting Park La Brea, I parked on the street and stood against the chain link surrounding the big tar-lake where Miracle Mile opens and closes. I looked down the "Mile" at where Johnie's Coffee Shop stands. It's closed now, and owned by a dollar-store chain, but available for shooting. De Jarnatt tells me that most of the remodelling they did for Miracle Mile still exists inside. Later, after our second day of recording, he'll take me over there and snap a photo of me on the payphone outside its doors. Having the director of a film you love recreate you in a scene from that film you love is...well, I have no apologies.

Steve is like that. He's full of life. He's all enthusiasm. I couldn't detect a bone in his body that wasn't genuine. He shared Mickey Rourke anecdotes with me as he drove past the Star 80 house. He showed me the on-ramp where they filmed the scene in Miracle Mile where Harry jumps out the back of the truck. He told me how excited and proud he was that they were giving his pictures their due some thirty years after the fact. He invited me to a reading that night of some new material he's been working on that he and his girlfriend were performing. After recording the Cherry 2000 commentary, Steve took me to a deli in Beverly Hills and bought me dinner. There was a 45-minute wait in the middle of the night--the place had history. I drank so much water the waitress plopped a pitcher down on the table and walked away.

At the hotel I was staying at on Sepulveda, I listened to all the pre-work Steve had done in preparation for recording the Miracle Mile track. I researched and took notes. I watched the movie again on a portable DVD player I'd brought with me. For the first time in a long time, I felt those little worms gnawing in my belly. Years of public speaking and teaching have made me generally immune to nervousness. But I was nervous. 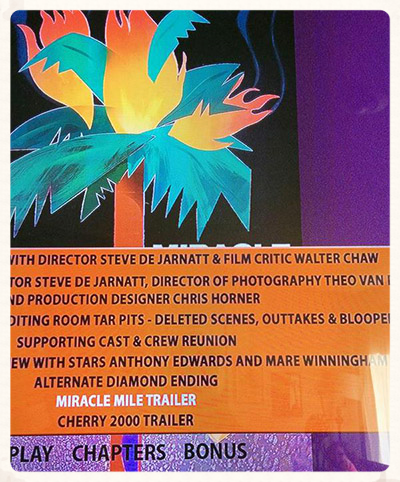 I'm 42 years old this year. I was 16 when I tried to commit suicide. In between, I wrote a book about it. Now here I was in L.A., about to record a commentary track for a movie to which I gave a lot of credit for talking me out of trying to kill myself again. Miracle Mile very much tapped the apocalyptic zeitgeist of that era, and what I understand now is exactly how tempting it is to try to write yourself into the greater storyline sometimes. It's either madness or holiness; I don't know the difference, I guess. I think about that summer, and that film, whenever someone young and confused does something no one understands.

The studio we recorded in was located inside a home in a nice neighbourhood where Google had purchased every other house for its employees. I thought it was interesting that Mickey Rourke, fresh in mind from Steve's stories a day earlier, was recording before us. Then it was our turn. A beautiful set-up. Warnings about how sensitive the mics were. A glass of water--tea with honey for Steve. The movie started. We got it all in one take.

I'll say this: I'm lucky. Lucky I survived, lucky for my friends and my family, lucky for this opportunity to close a circle at the midpoint of my life. My kids are getting old enough now to start asking questions. They know that I've written books, that I review movies, and that I teach film. My daughter, who will be 12 this year, attended an entire seminar I gave last fall on early-American Hitchcock and now speaks with some confidence about periods in the director's life and his major themes. She recently watched Marnie and wanted to discuss how it worked in tandem with The Birds. She compared Marnie with young Charlie from Shadow of a Doubt. I hadn't thought of that.

Last week, Steve sent me the Blu-ray of Miracle Mile. Watching this new, beautiful transfer of the film, I cried like a baby. I didn't listen to the commentary. I never will.

Miracle Mile by Walter Chaw is available for online purchase in paperback at Lulu, Amazon, and other booksellers, or as a digital download from Lulu and iTunes.com. KL Studio Classics' Miracle Mile and Cherry 2000 Blu-rays street on July 28 in the U.S. and Canada.