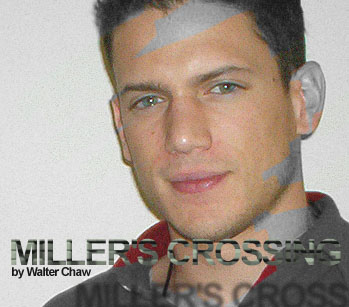 November 2, 2003|Over a thousand people packed into The Rise nightclub for the 26th Starz Denver International Film Festival's opening-night gala reception. A cavernous space with booming music and leggy cocktail waitresses, the venue was a drastic departure from last year's sedate to-do at the DCPA's Temple Buell Theater, and it was in one of the upstairs rooms that I first met Wentworth Miller, the tall, handsome, calm, and extremely courteous young star of--and, lucky for me, the best thing about--Robert Benton's pretty awful The Human Stain. I met him again the next morning for official purposes at Denver's also surprisingly tall Mag Hotel, plopped in the middle of the busy intersection of 19th and Stout along Banker's Row in lower downtown Denver. Best known for his guest appearances on television shows like "Buffy the Vampire Slayer" and "Popular" (and as an athlete with a literal bleeding heart in the seventh season premiere of "ER") as well as for the "Luke Skywalker" role in the unfortunate Dinotopia, Miller is receiving what could potentially be his big break, stealing the show from Anthony Hopkins, Nicole Kidman, and Gary Sinise playing a role that's surprisingly close to home.

FILM FREAK CENTRAL: Your father is African-American.
WENTWORTH MILLER: He is. I was given the script and went in to read with [casting director] Deb Aquila, realizing that this was a powerful story and one that wasn't told very often. I told her that I liked the script a lot because it resonated with me as a minority and I thought I knew a lot of the subtext of what was going on with this character. She was surprised, so I told her that my father is black and my mother is white and that I understood a lot of what's going on in this story because of my own memories and experiences. We had a great talk, almost too good, because by the time we got to the actual read, I felt like the build-up was so big that I really needed to deliver--almost more than what maybe might have otherwise been expected from me from a first reading. Luckily, it was one of those situations where I had my best with me that day: I was in tears, she was in tears, we did all the tough scenes in the movie, and she brought me back in a month for a screen test with Robert Benton.

The film was cast at this point?
I don't know completely at that point, but by the time I tested for Benton, yeah, I knew they'd gotten Anthony Hopkins, Nicole Kidman, Ed Harris, Gary Sinise...

Scared?
For sure, but during an early read-through for the screen test, y'know, you read it once and the director gives you adjustments and you do it again and so forth. So with me on one side of this boardroom table with Benton, the producers, the casting director, the cameraman on the other--yeah, intimidating of course. But something happened after the first read-through. Benton got up, walked all the way around the table, and whispered the adjustment in my ear. He made it very private, very personal, and it meant the world to me because it demonstrated to me that no matter how low I might have been on the pecking order for his film, he was going to treat me like an equal.

Did that moment define the places you were willing to go in the film?
I think so, absolutely. That moment, when he showed me that he wasn't going to shout across at me and that he appreciated that I might feel a little isolated there by myself, gave me the confidence, I think, to tackle a lot of these very private issues in a public forum. He was going to treat me with respect and care, and an offshoot of that is that they didn't leave me hanging for another month--they told me at the end of that test that they wanted me to be a part of this project. You know, after the test I walked out of the parking lot and I had a moment of clarity where I thought to myself that not many people will ever have this moment. Talented people, extraordinarily talented people, more talented than me by far, for whatever reason will not have this feeling that I'm feeling right now. I feel extremely lucky, extremely grateful, and a little bittersweet, too.

Talk to me more about race, specifically about growing up mixed-race.
It had its challenges, for sure, but I mean, everyone has their challenges. I'm not going to pretend it was any more difficult than being anything else, than having any other kind of attribute that might distinguish a person for ill in the eyes of some. My experience is that I find myself having to constantly define myself to others, day-in, day-out. The quote that's helped me the most through that is from Toni Morrison's Beloved where she says, "Definitions belong to the definers, not the defined"--so I find myself defining myself for other people lest I be defined by others and stuck into some box where I don't particularly belong. There is the sense of being between communities and you sometimes wonder if you don't have to answer to any group or interest, that you're some sort of racial Lone Ranger, but the flipside of that is that a racial community, functioning at its best, provides not only a sense of identity--that luxury of looking into another's face and seeing yourself reflected back at you--but a sense of security and support. When I run into trouble, what group will rally to my defense, come to my aid. The answer, and it's scary, might be "no one."

As an American-born Chinese, I find myself equally liked/hated by whites and Asians--often for the same reasons.
Exactly--we occupy in a way an ideological null zone. It's where, I think, my character in this film finds himself where at the end of his life his black friends have deserted him and his white friends snub him on the street. It's a strange place to be and I like to think that the picture is about this man who is put into a box, is suffocating, and wants to break free but maybe has forgotten how. I think that everyone's been there based on gender, religion, personal politics--we all know what it's like to be stifled and need to be free, racial issues aside.

But what were your racial issues? That you're of mixed race comes as a surprise to me and, probably, to most who are familiar with you and your work.
Well, let me put it this way, I've been spared to a large extent the business end of the race stick. Nobody's ever asked me to pay for a meal before I've eaten it, I've never been pulled over just because I was driving the wrong kind of car in the wrong kind of area at the wrong time of night. My encounters with racism are sort of second-hand situations where I might be standing around with a group of white friends and someone makes a comment that they wouldn't make, say, at my family reunion. It leaves a cut. Someone calls you "nigger" and it's like a knife to the gut. To be in that sort of situation it's just a little nick, but you suffer enough nicks and you bleed to death just the same. So when that happens, you're confronted with the quandary: do I stop the party, do I grind things to a halt? And ideally you would each and every single time, but Walter, I have better things to do than to educate people--it just has to be a case-by-case basis and you develop a lot of scars.

What did you write your thesis on for your English degree from Princeton?
I wrote it on the idea of doubling and the gender identity construct in Jane Eyre and The Wide Sargasso Sea--which, I guess, is also about identifying yourself; perceiving yourself through the eyes of the dominant white male hierarchy.

So this running theme in your life, this trickier than usual, perhaps, idea of personal identity--are you satisfied with its treatment in The Human Stain?
Let me answer you this way, and I want to do it very carefully because I'm not objective about this project in any sense. Last night, the screening, it was very well-received and people were very complimentary... Okay, let me put it this way, when I saw it for the first time at the Venice Film Festival, what I felt afterwards was very embarrassed--not at all in a bad way, but in that way where you've just put something very personal up there, very private just out there--something that had just happened between me and Jacinda Barrett or something that was still very painful for me from my own life. And suddenly, all these people were just coming up to me and talking to me about it, having this dialogue with me and I'd never spoken with them about it and, for me, these things are still very personal, still very private issues that I wrestle with and come to terms with every day. I have no idea who they are, but they have ideas about me--and I have no idea what rules of etiquette they're working with and it's frightening.

Do you get feedback from mixed-race people?
Quite a bit, quite a bit, a lot of them glad that they're seeing a representative of themselves reflected on screen.

In a literal way, of course, because there are a lot of mixed-race actors: Keanu Reeves, Halle Berry, The Rock, Mariah Carey...
(laughs) True, absolutely--this role is the more visible, of course, and I grew up without a lot of that sort of modeling so, in that sense, really, I'm relieved and proud to have done this film. I say that with the sobering understanding that if I were to wait only for roles that clarify my racial makeup, I'd be waiting for a very, very long time. I want to aspire to something like what Denzel Washington does which is try to find scripts written for white actors--or Jodie Foster who reads scripts for male actors. I tell my reps to send me any parts where race doesn't matter--that's closer to equality in the long run. I hope we get there some day.