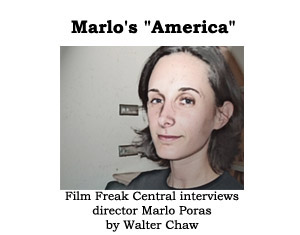 June 2, 2002|After working as an apprentice under Martin Scorsese's brilliant editor Thelma Schoonmaker, Marlo Poras decided that she needed a change of pace from the stress of mainstream film production and followed a friend to North Vietnam to make educational AIDS videos for national distribution there. Immersed in a foreign country, one that still holds their victory in "The American War" as a source of great pride, Ms. Poras became interested in a quartet of high-school exchange students preparing to spend their senior year in the United States, a place idealized and demonized in equal measure by the North Vietnamese. Armed with a Sony VX 1000 Mini-DV camera and nothing else in the way of crew or experience, Ms. Poras narrowed her focus to one subject, Mai, and to Mai's often-peculiar experiences in rural Meridian, Mississippi.

With 170 hours of footage whittled down to a lean and fantastic ninety minutes, Mai's America demonstrates Ms. Poras's skill as an editor in finding the moments that matter and punctuating them with a sparkling wit. The success of the film is all the more remarkable for the fact that Mai's America is Ms. Poras' first documentary, first feature-length production of any kind, and her self-described "film school." The result is only the best debut documentary I've seen in years.

I met Ms. Poras at the Aurora Fox Theater in Denver the day before Mai's America bows as the closing night selection at Aurora's Fifth Asian Film Festival. (Her picture has been picked up by PBS' non-fiction series POV for air on August 6th; check www.pbs.org for local broadcast information.) I was delighted to find the filmmaker as effervescent, articulate, and kind as her film.

FILM FREAK CENTRAL: What was the experience of working with Thelma Schoonmaker?
MARLO PORAS: It was intense. (laughs) It was my dream job when I arrived, and I really respect her work and Scorsese's work--but I found out pretty fast that it wasn't for me.

Did you do any actual cutting?
I didn't, no, but I learned the basics of organization so when it came time for me to tackle post on Mai's America it wasn't as daunting for me initially as it probably should have been. (laughs)

You have a nice way with visual and narrative irony--can you quantify how much of that is design?
Well, I like to laugh and I like documentaries that make me laugh. People sometimes view documentaries as medicine and I don't like to take them that way. For sure, a lot of my sensibility seeps in. Some of those moments, you just know when they're happening that they're gold--and others you discover after going through all the footage.

Tell me about the contribution of David Sutherland.
David is the most wonderful person and a brilliant filmmaker: an outstanding teacher. He guided me, he asked me all the right questions to help me figure out things on my own--and he'd tell me about camera work and the importance of microphones. I used three mics at all times, but he'd really raised the bar and though it was a lot to handle for someone working on their own, I'm really glad I did that. I do regret not using lighting in some of the night scenes--in some of the venues I've screened the film in, that black detail just doesn't register. I'd do that differently in the future, but I really thank God I had David. A lot of the sensibilities of the film are David's sensibilities and I can't thank him enough for that guidance.

What were your own experiences as an exchange student?
It was great, when I was in high school I ended up in this beautiful town in the south of France and I had a really wonderful program that I went with--but it was really interesting to me when Mai was with her first host family that they were remarkably similar to the host family that I stayed with. They were more well-to-do, of course, but they were depressive and surly. They didn't talk during dinner, they just watched TV--and the daughter, she wasn't very popular so she got this exchange student to be her friend. So I completely identified with that aspect of Mae's experience.

Mai is such a transparent subject.
The biggest reason I narrowed it down to Mai was her comfort in front of the camera--she loved being filmed. When she was in New Orleans she actually auditioned for [MTV's] "The Real World" and she paid me this compliment--I asked her how it was and she said, "Marlo, they have no idea how to interview!" But that's how much she loved being filmed and for her, being in America, feeling this alienation--being filmed was very positive for her. She has this innocence and this wisdom, and this funkiness and this warmth.

It struck me as madness that Mai was placed in rural Mississippi as a Vietnamese exchange student, but perhaps there's a method to that madness.
It made me think a lot about what place really defines America. When I first started the film I followed four exchange students: the first was placed with an Iranian lady in Washington state, the second with a sort of salt-of-the-earth Christian family in the Illinois farmland, and another was placed with a Caucasian family living on a Hopi Indian reservation--and each of these families was uniquely American though completely different from each other.

Chris the drag queen becomes such an essential part of your story--he acts as both metaphor and device. Did you know when you discovered him that you'd captured the centre of Mai's story?
There were so many points during the making of this film that I felt like the art gods were on my side. I mean, a gay bar in rural Mississippi? How does this stuff happen? Her house sister brought her there because it was the only place to get served underage, so she brought Mai there, she was friends with Chris already--and when he walked in, Mai's jaw just dropped. Kim introduced them and Mai was totally in love. They were both outsiders and they bonded instantly.

Isn't there a large gay and transvestite community in Vietnam?
There is, there is, but it seems very quiet for the most part. It would surface in the strangest of places. I'd go to the really rural areas--the boondocks--and there'd be this transvestite singing or something and I'd think, "Here? Of all places?" So Mai had known of transvestites, but had never really had much interaction much less befriended one before Meridian.

Tell me about Chris' decision to stop being a drag queen.
When Chris "reconverts" towards the end of the film, Mai was so shocked and sad because she felt that Chris was sacrificing his own will for other people--that he was giving into pressure. And what was really exciting to me was afterwards realizing that Mai was succumbing to the same pressures to subsume her will for her parents'. The process of discovering those themes in the editing--and there are a lot of parallels, most obviously the shoeshine boys in the beginning with the last shots of the film--was the most rewarding experience for me. Chris, by the way, is back in drag. I'm going to fly him out for the Provincetown festival and hopefully he'll get a look at a place that isn't so violently homophobic and intolerant.

There's some mirroring in her Vietnamese friends in the United States as well.
Yes--they have this thing where he was really afraid of going back to Vietnam and then he does and comes back and feels this overwhelming sense of joy of having gone and belonged for the first time somewhere. And then he takes Mai to the greater Vietnamese community and while she's so excited to go, and she's really getting along with her friend--she finds that she felt such a deep cultural divide with these people trying to recapture their homeland in their adopted land.

Was your inspiration for this project the urge to document the culture shock of foreigners abroad?
In 1996 or '97, all the documentaries I had seen about Vietnam were either about vets going back or adventure travelers going there--but I knew that 40% of Vietnam is under the age of twenty-five. They were all born at the end of the war and given this very strong... I don't know if you'd want to call it propaganda, but a very strong education about America and the war--as much as we receive the same here, I guess. But I knew that I wanted to do something about a teen--a young person--and in Hanoi all the people had parents who had fought against the United States and were taught to be very proud that this nation of rice farmers had defeated the most powerful country in the world. There was this cockiness there, but at the same time they were totally in awe of Hollywood and MTV, and that dichotomy was too compelling a starting point to ignore.