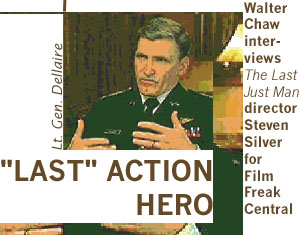 September 29, 2002|At once a startling exposé on the horror of Rwanda's 1994 genocide and a stirring portrait of heroism, Steven Silver's fantastic documentary The Last Just Man is a balanced, provocative film that demonstrates a steady hand at the rudder and an educator's philosophy at the helm. It is wrenching and difficult to consider one's own life from the same perspective once watched--thus it fulfills the noblest aspirations of the medium: to move, to inspire, to edify, all so professionally composed that it manages to disguise its mechanism. Finding the right balance between history and irony, outrage and careful consideration, is a devilishly tricky thing, and Mr. Silver carries it off with a surplus of apparent ease. I was honoured to chat with Mr. Silver on the telephone from Toronto this morning preparatory to the Colorado debut of The Last Just Man at the Argus Human Rights Festival.

FILM FREAK CENTRAL: What's your background?
STEVEN SILVER: I was a law student, I was doing an "LLB" at University in South Africa and made a short film and decided I'd rather do that than study law. I moved to Toronto where I wrote and produced a film [in 1997] called Gerrie and Louise, which was a film about the truth commission in South Africa. My background before this was that I was an activist. I worked for the African National Congress for a while and the president of a student group. Investing in degrees at that time was really a means to stay on campus because the work was sometimes a little dangerous and being attached to the University gave us some measure of protection.

What was your short subject about?
It was just a silent film set to music about the humorous interaction between a man and a woman sitting at a bench in a train station.

Is that your primary influence, the silent film?
No, no--I had $700.00 to make a film. (laughs) Growing up in South Africa I loved movies but the idea of being able to make them was so remote and inaccessible--it just seemed that the world where movies were getting made was so far away that it never entered into my mind that this was something that an ordinary young South African male would be able to do. I remember when I was ten years old I saw Rocky and Star Wars and then later I was introduced to Bergman and then documentaries--but I really needed to reach an age where I began to believe that it might be something that I could do.

What inspired your activism?
I'm Jewish. I have a few Holocaust survivors in my background, and I think it's somewhat common for people like me to want to do something about injustice. From my point of view, if you're even slightly bright, slightly enlightened and living in Apartheid South Africa, in some ways, it's harder to do nothing than it is to do something.

Did you experience anti-Semitism in South Africa?
Very little--I mean there was some stuff when I was a kid, but I wouldn't say it was an inciting factor.

How did you shift from activism to filmmaking?
(laughs) Well, I was never a good politician and my time in anti-Apartheid politics ended with the birth of the new South Africa and I knew that I didn't want to be a member of a political party again. Film was just a medium through which I could engage a lot of people and still feel as though I were staying involved. What's great about it is I can choose what to be interested in--plus you get paid for it which activism very seldom does.

How did you learn about Lt. Gen. Dellaire?
I read an article about five years ago in the New Yorker (Phillip Gourevitch, "A Letter from Rwanda: After the Genocide", New Yorker, Dec. 18, 1995, at 85 -Ed.) which told a part of the story you see in the film--it mentioned the fax from the UN to Dellaire ordering him not to act and that fax had been leaked. A friend of mine, Mary Stevens, a filmmaker and colleague sat and talked about it and said that this would make a great film one day. At the time, I was tabbed to do a documentary anthology series called "Turning Points in History" and I thought about doing my one-hour episode on this and eventually, it broke out into a feature-length interview.

Was Dellaire excited for the chance to speak out about his experiences?
I don't know that "excited" is the right word--he'd not spoken for a long time and for part of that time it was because the Canadian military had placed a gag order on him, but even before I contacted him I suspect he'd come to the decision that he was ready and needed to start talking about it again. So he was very, very active behind the scenes of the film--it was quite a courageous and difficult process for him, I think.

The last moment of the film, the word "enough" and the sharp cut, was extremely striking--tell me about the challenges of telling this story and finding your editorial voice.
I worked with a great editor,Sarah Bachinski. There were two challenges: one was how to deal with the graphic nature of the material--we wanted to do that in a way that didn't produce that reaction of, "I've seen this before, black people killing black people, I don't wanna see that again"--the genocidal equivalent of refugee camps in Africa, if you like. So we decided to hold back on that graphic visual material until the audience got to know Dellaire so that he could be our guide into that world. The other challenge was dealing with the historical material because I wanted the audience to know what had led to this event without resorting to any sort of crude shorthand. I don't know if that was as successful as I had hoped it would be, but we recognized that we really needed that backstory--to dip back into the past for long enough to offer some of that complexity but not for so long that we'd lose the audience.

Speaking for myself, I really appreciated the history you provide of the Belgian colonial presence in Rwanda so that I could appreciate the irony of the Belgium soldiers being targeted in your picture.
Yes--in some ways there's definitely a connection, another thing to consider though is that there were only two full battalions of soldiers from individual countries: the Belgians and the Bangladeshis. See, if they'd killed twenty-four Bangladeshis and Bangladesh withdrew support of the project they wouldn't facilitate the same kind of domino effect that causing a white European nation to withdraw would and did. So in that sense, it wasn't really retaliation so much as a calculated strategy to cause the unravelling of the peacekeeping operation.

How long did you go to Rwanda?
Two weeks. It's a very different place now, of course, than it was after the genocide. What struck me about it was this kind of a glazed look--a kind of glazed haze--that sits in front of everybody's eyes down there which is the most pronounced symptom of what has happened. There's a considerable amount of fear in people's daily lives. What everybody knows is if I am the victim, I inevitably live down the rode from the perpetrator and that perpetrator knows I have that knowledge and my knowledge creates this bizarre game of extended chicken. I mean, are we both safe from one another--when will we take vengeance against my neighbour? It's something everyone talks about that down there.

Do you have any comment about the current UN situation with the US pushing for war with Iraq?
(laughs) No. I will say this however, that I look forward to the day in which we intervene not simply for reasons of national interests or security, but launch off the trampoline of some human rights-based doctrine. To bring into line nations violating international law not at the behest of the United States on its own or solely the security council, but as a product of the collective will of the United Nations. I'm not a non-interventionist by any means--I recognize there are moments where the world needs to intervene, but it needs to be the world and it needs to be done from a set of rules that sit beyond one country's national interest. I think that the United Nations is the forum for that. I should say this that I've been a supporter of the United Nations for as long as I've understood its mandate--my disappointment is in the extent to which it has failed in that task. Having said that, I should say that I recognize that it faces enormous difficulties as the dog at the end of the leash--the biggest hand on that leash is the US [followed closely by France, Britain, China...] and collectively they don't always jump in when they feel if the cause is not close enough to home. And that's not good enough.

You recently had a PBS documentary about Hindu fascism in India--what's next?
Yes, "Soul of India", and what's next is a feature film about the "The Bang Bang Club", about that group of photojournalists in South Africa. It's based on a book (buy at Amazon.com) written by two of the four surviving journalists of the "Bang Bang Club" (Greg Marinovich and Joao Silva -Ed.). We're heading towards first draft, it's partly financed, and should start shooting next year.

Do you have a wish list of actors?
(laughs) Yes, but I can't tell you what it is.