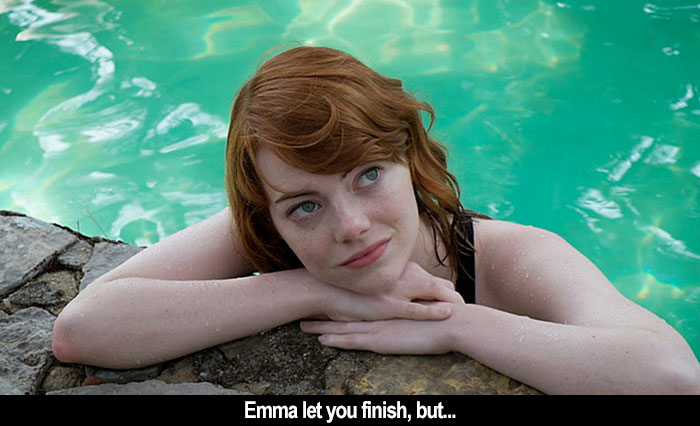 by Angelo Muredda There's an odd, mean little movie kicking around in Irrational Man, if you can sift past the tired bromides about love and continental philosophy to find it. The fifty-first feature from the not-so-venerable Woody Allen reads like a work of sloppy automatic writing given some surprisingly rich shading by an alert, unpredictable performance from Joaquin Phoenix and the steady hand of Allen the director, who once again proves he's as efficient at handling the near-screwball mechanics and black pitch of crime pictures as he is inept at romantic comedies. A nominal May-December romance about an aging fusspot granted a new lease on life by a twentysomething sunflower, Irrational Man is a far more disquieting film than its marketing would suggest--if not a confession of the director's real-life pathologies, then one of the most incisive profiles of a sociopath ever tucked into the back of a dark comedy.

Phoenix plays Abe Lucas, a world-renowned philosopher, philanderer, and drunk, hauled to a small-town college campus in Newport, Rhode Island, where he's expected to bring his game-changing intellect and gross sexual appetites to bear on his sunny surroundings. Impotent, blocked on his new book about Heidegger and fascism, and too depressed to wear anything but pot-belly-revealing opened collared shirts to lectures, Abe fritters away the days care of a budding romance with ace student Jill (Emma Stone) and a dysfunctional, would-be carnal affair with boozy science professor Rita (Parker Posey). That is, until he makes an impulsive choice to put his existential philosophy into practice to see what life looks like on the other side of traditional morality.

Allen has never been particularly good at depicting worlds outside of his blinkered existence, and Irrational Man is an especially egregious case. If the central relationship isn't quite as stilted as the pairing of Stone and Colin Firth in Magic in the Moonlight, it's still hard to get a grip on Jill's interest in Abe, who isn't a much better catch than a surly undergrad, despite his years. It doesn't help that Allen's philosophical education hasn't advanced any farther than Alvy Singer's in the nearly forty years since Annie Hall, forcing Abe to endlessly riff on the cruelty of existence while talking infernal loops around the names of Kant, Kierkegaard, and Sartre, as though the discipline has been dead since Being and Nothingness.

Why, then, does the film wriggle its way into one's mind as well as it does? It's difficult to discuss what sets Irrational Man apart from Allen's weaker genre efforts without touching on its central twist. Suffice it to say that Phoenix's childlike wonder and vivacity in the face of the crime he's about to commit and his smug glow thereafter ring truer than anything in the starchy, talky lead-up. When Allen abandons all pretense of telling a story about existential malaise and hard choices--that is to say, when he embraces his hero's disregard for not just social mores but also the basic sanctity of human life--Irrational Man goes in a surprisingly capable new direction, away from the obvious moralizing of Crimes & Misdemeanors to the point of near-total identification with a serious transgressor.

What Allen is trying to say about Abe's trajectory isn't so easy to parse, partly because he's working in a more ambivalent key than usual and partly because the structure is needlessly complicated by Jill's co-narration, a quirk that never quite makes sense even after it's given some context. You could read Abe through Jill's eyes as a nice-enough guy turned malevolent force that needs stopping, or you could go with the narrative momentum, which favours a world with Abe in it--doing as he pleases, whatever the outcome. This is an unsettling thought, considering Allen's own apparent proximity to ruined lives, and he surely knows it. It isn't the first time he's sampled his life story without naming it in recent years (consider the estranged stepson in Blue Jasmine, a Ronan Farrow doppelgänger), though it might be the queasiest.

Ethics aside, Allen seems as animated by the film's formal mutation as Abe is. Like Abe cheerfully plotting his transgression to the sounds of an instrumental "Smoke on the Water," Allen comes into his own in the back half of Irrational Man. He even rigs some genuinely suspenseful set-pieces that would be the envy of weaker but more critically-admired squibs like Match Point, among them a long take that pays off in a legitimately unnerving tussle in front of an elevator. Irrational Man is a prickly movie that doesn't always work yet stubbornly demands our attention anyway.