In Conversation with Arthur Dong 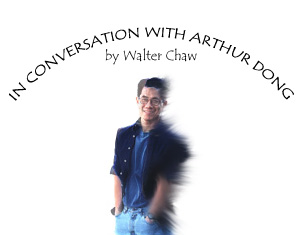 September 27, 2002|The latest by a veteran and much-lauded documentary filmmaker based in the Los Angeles area, Arthur Dong's Family Fundamentals examines the toll that hatred and intolerance have taken on either side of the ideological divide separating fundamentally Christian families from their homosexual children. Following three families, Dong's picture is notable for its remarkable restraint--its amazing lack of stridency in the face of as insidious--and puzzling--a form of fanaticism as any in our cultural dystopia. Such objectivity graces all of Mr. Dong's late production--works such as the (twice-honoured at Sundance) documentary Licensed to Kill (in which murderers of gay men are interviewed in prison) and Outrage 69, which details, in part, the Stonewall riots of that incendiary summer of '69. I talked to Mr. Dong, a Chinese-American and an openly gay man raised in the Chinatown section of San Francisco, about getting started in film and growing up Chinese in the United States.

ARTHUR DONG: Wow--that's a tall order, how long is your article? (laughs) Let's see, I was born and raised in San Francisco but in Chinatown so there was always this odd blend. I had to go to Chinese school after American school everyday--kids who thought they had it bad by going to school once a day didn't know what I had to go through--twice the homework and everything. But doing that taught me a great deal about work ethic--it gave me a foundation for how to excel in whatever I did and that was very important. I carry that through to today. I like to break rules, you know, but I also respect having to know what the rules are first before I break them.

FILM FREAK CENTRAL: Did you ever feel resentful of your culture--experience that divorce?
No, but it's a common enough thing, I'm sure some deep therapy will throw some light into some dark corners, but not really. My partner is Chinese-American and he was raised in a small town in an all-white area so he experienced a lot of that resentment of difference as a child. But living as I did in San Francisco, I mean, we were the majority there. It wasn't until junior high and high school really, that I began to see some diversity and even then it was a pretty wide diversity so that racial element was never really overt.

You make the distinction between overt and subtle racism, then.
Oh yeah, of course. Were I to take a really close look at some things, I'm sure there'd be a lot of examples of more subtle forms of racism being used against me through my whole life and that, really, is much more insidious.

You were the victim of a gay-bashing incident in 1977--traumatic enough, was it more traumatic for your never really feeling the minority?
I'm not sure if it was more shocking for that, but we need to put 1977 into context. That was a time when the whole subject of gay-bashing was something way on the back burner--it just wasn't talked about very much. Anita Bryant was coming to power and so on so it was sort of a volatile political environment but it was mostly celebratory. One night a friend and I were walking home, it was pretty late, and we weren't showing any outward signs I don't think of same-sex sexuality when a carload of teen boys stopped in the middle of the street, jumped out, and started pelting us with eggs. So we ran and latched ourselves onto a VW bus--one of those ones without fenders so we really had to latch ourselves on--and the guy driving sort of understood the situation we were in and drove us out of there. So we were okay, sort of in shock but essentially okay--but it wasn't until a couple of days later when we read an announcement about a priest who had been bludgeoned by a gang of boys that same night that it really sank in that, "Hey, those tire irons were for us."

What did that incident, those two incidents I guess, mean to you?
Well the first question I asked was, "Why me?" But that was kind of ridiculous because the real question has to be, "Why does this happen at all--what motivates this kind of belief and this kind of violence?" And I started that night to do my own casual research on that topic--newspaper clippings and so on about that hate.

How did collecting newspaper clippings evolve into filmmaking?
Well, I always wanted to be a film historian--instead of going out to play basketball with the guys when I was a kid, I spent all of my time in the reparatory houses fascinated with the fact that here were images recorded decades ago that were as immediate and vital as that--there it is on the screen. So in high school my art teacher taught classes about filmmaking and I got to be the director of a project so instead of being a passive film lover, I became an active participant in the process and I was hooked. At that time in the late Sixties, you understand, the idea of independent filmmakers was pretty new and foreign--after my first two shorts, Public and Living Music from the Golden Mountains, I gained some notoriety and was asked to take some film classes at the college and to talk about them before an audience and I realized, "Hey, I don't have anything to say, I'm just a kid." So I dedicated myself to living a little and did that for the next nine years before going back to film.

How did (the Oscar-nominated) Sewing Woman come about?
I was in film school and I wanted to try to shoot some stuff and there were some cameras left over from WWII--cranky old cameras that none of the students wanted to touch, but I didn't care, I just wanted to play. So I went over to the sewing shop where my mom worked to see what I could see--so I took it in and y'know, instead of daycare, I'd spend my days at work with my mom in the sewing shop so they all knew me and there wasn't any of this stranger/invader discomfort into that workspace. And I shot all this footage and watched it with my instructor and it was just great stuff. The lenses, this high grade black and white inversion film that's not even made anymore, it all combined to make this gritty-looking thing and I felt like I really wanted to do something with that place and that look. Of course my mom didn't approve (laughs) but I went ahead with it and my dad got me photo albums and we didn't tell her figuring that once it was finished, if she still didn't like it, we wouldn't show it--but luckily she liked it.

How/why did you segue from Chinese-American issues into Gay and Lesbian issues?
That's a good question. Well, it's kind of a natural progression I think--from [the short feature] Lotus I went into Forbidden City, USA, I was working on both at the same time--Forbidden City took five years and was just a ton of stuff--you'll get to see a lot of it on the upcoming DVD for it--but from there I went to work for a local PBS station which was just a totally different environment. While I was there I did twelve documentaries in a one-year period of time (For the "Life & Times" series. -Ed.)--a really quick turnaround on some very contemporary issues and during that time I got turned on to the book Coming Out Under Fire and it just struck me that this was very much a civil rights issue. Here were people fighting in WWII and they had to fight their own brothers in arms so I contacted the author Allan Bérubé who had actually been teaching a class using Forbidden City, USA as an example of gay cinema. So it really did feel like a natural transition from that overt identity as an Asian-issues director to an overt identity now as a gay director.

Tell me about maintaining an even keel during your films.
Well, I had a job to do. My job was to record the stories to put them on screen for the public to see. My job wasn't to tell my story, but to tell their story--to give them that opportunity and forum to express their opinions and let the people judge for themselves. My job as an artist is to present those views in context--ones that people may not have considered for themselves. As a filmmaker I have to tell you that I was very pleased with the stories I heard in License to Kill and Family Fundamentals--I felt like I was getting closer to the truth in those pieces.

I was reminded while watching Family Fundamentals of the comments of Jerry Falwell on 9/11 blaming the atrocity on feminists and homosexuals--did that strengthen your belief that you'd picked the right topic?
Oh yeah, yeah. There were three things that happened during the filming of this picture that strengthened my resolve to see it through. The first was the appointment of John Ashcroft to the position of Attorney General--here's a man who is a prominent Pentecostal, the same church that Kathleen Bremmer belongs to, actually, and if he had his way I wouldn't exist. The second is what you mention, and the last is the two girls [Dayna Curry and Heather Mercer] who were taken hostage by the Taliban and released--and they were treated like national heroes: trips to the White House, talk shows... Two pretty young things celebrated for pushing their vision of God. If you go to their church website, it's scarier than the Pentecostal website--that these girls are suddenly somehow heroes for their version of godliness is very frightening to me. I have all due respect for everyone's personal choice of god, but only to the extent that it doesn't impinge on my own right to exist.