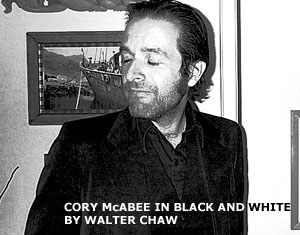 September 18, 2002|Cory McAbee's The Billy Nayer Show is a brilliant aural assault of a band that just so happens to be involved in the process of filmmaking. The American Astronaut--written, directed, and starring McAbee--is an amalgamation of traditional 35mm cinematography, still photographs, paintings, and in one particularly disquieting scene, sculpture. In many ways, the film is the logical end to years of celluloid experimentation from McAbee, beginning with 1993's The Billy Nayer Show, a 150-second animated short film created with house paint and paper; continuing through 1994's twenty-minute Pixelvision-wrought The Man on the Moon, which details a cuckolded husband who takes his cat to the moon, where he broadcasts something of a radio show back to Earth; and reaching something of an anti-climactic pinnacle with 1995's thirty-minute The Ketchup and Mustard Man, essentially a discomfiting performance art concert (complete with a bizarre sculpted application) edited in such a way as to suggest that it's the fever dream of a demented mind (which may not, after all, be far off).

McAbee's fixation on traditional forms applied to science-fiction (the radio show, the western) reveal themselves to be at their root more interested in love and the lovelorn than aliens and spaceships. Consider how the tag for The Man on the Moon ("The Moon is a Lonely Town") expands in The American Astronaut to "Space is a Lonely Town." McAbee's images and lyrics, then, are not so much the absurdist constructs that they first appear to be, but mordant, darkly satiric allegories of the power and the purity of love--even Jesus rolling his pick-up in one of The Billy Nayer Show's tunes can't stand in the way of that vision and the light.

McAbee is an emerging talent, equal parts early Steve Martin and early David Byrne, with an artistic sensibility best described as an intoxicating cocktail of scary, witty, and sublime. His next gig an acting role in a film called Charlie the Ox, his next auteur turn the intriguingly titled Werewolf Hunters of the Midwest, it was my great pleasure to dine with Mr. McAbee prior to a screening of The American Astronaut (at Boulder's International Film Series) followed by a solo concert (at the Boulder Theater) during which McAbee performed a quick set on ukulele and autoharp before an enthusiastic crowd.

Dressed in a thin three-piece blue suit and an open shirt, McAbee was as quiet and polite as his on-stage and on-screen persona is expansive and aggressive. Self-deprecating and deadpan hilarious ("I used to work as a bouncer at a strip joint called 'The Tenderloin' with Curly of the Three Stooges' illegitimate grandson. His name was Jessie"), I sat down with Mr. McAbee in a post-apple-upside-down-pie glow (courtesy the magic kitchen of the lovely wife of the International Film Series' dedicated program director, Pablo) to ask him about the genesis of The Billy Nayer Show and, oddly enough, the name of his firstborn, stemming from a quick discussion of the odd way my own last name is spelled.

CORY McABEE: My son, when I have a son at some point, will probably be teased about his name but grow to like it, too.

FILM FREAK CENTRAL: Oh yes? What will you name him?
The Mummy.

(laughs) There might be a stigma attached to that, yes.  Let's discuss the genesis of The Billy Nayer Show, starting with your first group with drummer Bobby Lurie.
We were playing together in our first band that didn't have much of a name really, then he went off to study music and I went to work as a bouncer, a doorman, at various clubs. During this time I started singing songs and put together this little band, this little combo with horns and a piano player. The guy at the club asked me to do an Ink Spots tune while this other club owner was in the audience and this other guy gave me three sets. So we put together some stuff until Bobby came back, we told the piano player to hit the road, and did cover songs for a while. 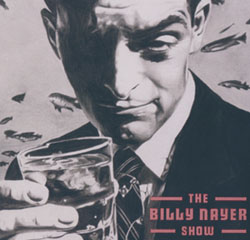 What sort of covers?
'40s stuff, mostly--but then we decided that we didn't want to do that anymore, we wanted to do originals. While we were doing that, I was also getting to work on that first animated short.

House paint on paper.
Yeah. As I was doing the one-man show, a friend of mine named David Tomb--that's pronounced "Tom" even though it's spelled "tomb"--I told him that I didn't want to use my own name and he said, "How about The Billy Nayer Show," just sort of pulling it out of a hat and so it stuck. When I started making that animated short I gave it that name as well.

You worked in your bathroom?
Right, right. I made a rotoscope out of an old busted projector and for registration I hot-glued a cabinet door to my bathroom wall. The door had a little lip on it that I would butt the corner of the paper on for a common point of registration before I would trace the frames out in this dim light and paint them. It took about two-and-a-half years, on and off, sometimes steady, sometimes spotty, but I clocked each frame at about roughly an hour. I like it because it looks like it sounds, like how a bar sounds.

Tell me about The Man on the Moon and Buck Naked.
At the time of that short I was working at a different place and a guy came to my door with a pixel camera and said, "Hey, I have this thing I got for my kids but they don't play with it, maybe you can do something with it." And I said, "Yeah, yeah," and I started playing with like special effects and stuff and actually ended up using a lot of the things I'd learned there on The American Astronaut, just how much you can get away with, with high-contrast black-and-white. Every morning I'd get up and write and then tape it then watch it the next day and rewrite. Y'know, it was fun. It was my way of learning how to write a screenplay. Buck Naked, we used to work together in a bar, he was one of my best friends.

He was murdered while walking his dog, right?
Right--The Ketchup and Mustard Man is dedicated to him. He never saw the finished footage of Man on the Moon. I love that scene, by the way, when we're butted up against the screen and bopping up and down--I call it "the Muppet scene."

And The Ketchup and Mustard Man?
That was a live performance we were doing at galleries and bars and we wanted to do a film version of it. I love the soundtrack, the CD is one of my favourite pieces of work that we've done. The film...I like it, but it's not my favourite. A lot of it had to do with fixing problems because we were working with people that...I don't want to...well...one of the people wasn't really the nicest person and they pulled a few stunts that we ended up having to compensate for so whenever I watch it I can kind of see what woulda been and how we had to fix it. I like it enough and it won a few awards, but...

Was the central make-up application papier-mâché?
Latex and plaster.

You're most often described as "indescribable"--does that delight or bother you?
Well, I just think that my stuff speaks for itself, y'know, so in that sense I take the "indescribable" thing as a compliment. But I think it's the kind of thing where everything that I'm doing makes sense to me. I'm kind of a recluse so I just stay in and don't get too much outside input other than getting out to do what I do. But I think that as time goes on and the body of work grows people will be a little less likely to misunderstand. A lot of artists, it takes a while to develop your own "hand"--that's something that modern pop sort of eliminates: that ability to develop your own style. It's just a process of maturing, of finding what works and what doesn't--what were childhood whims and what are really ingrained in you: things that work and things that you sorta go, "Ehhh, I was a kid."

Tell me about "Billy the Kid."
Oh Billy the Kid! We were going to make it into a film and a few things happened, but it's still set up and hopefully we'll finish it as a film some day but as of right now it's about twenty-five four-panel comics. The guy who I'm makin' those with is Geoff Tuttle (Production designer on The American Astronaut -Ed.) and him and I lived down the hall from one another in this little hotel in San Francisco for a while. We became best friends when we were working in this sweatshop situation and our job was to paint faces on mannequins.

Just normal faces?
(laughs) Yeah, yeah--just normal faces. And I got him a place in this hotel I was living at and we'd sometimes just sit around and work on this comic.

I know that Dennis Potter's The Singing Detective was influential to you.
When I first saw his work in the early Eighties I knew, suddenly, that I wanted to make movie musicals in a way that was different and exciting. They were like nothing I'd ever seen and I was inspired by the possibility to do something that I'd never seen before.

You know that Keith Gordon is in post-production on a film version.
I just worked with actor John Polito on Charlie the Ox and he's got a role in that film--Polito is a great guy, I have a story about him and garlic bread that's too long to tell.

Let's talk about your collaboration with cinematographer W. Mott Hupfel III on American Astronaut.
Well, Mott is married to my producer Josh Taylor's cousin and is one of his oldest friends. Josh isn't an actor, but we had such a nice rapport off camera that I decided that he'd be a good fit for the Blueberry Pirate role in American Astronaut. Mott works mainly in soap operas where the script is like, "Night: Sad," so for him to be able to work in high-contrast 35mm with directions like, "Curtis dwarfed by asteroid bar" was really fun for him I think. The film looks really good. It should--I mean, for 23 days it cost a lot more than you'd think.

Between one and two million dollars?
Right. I guess it didn't cost more than you'd think. (laughs)

What's next after Charlie the Ox?
Well I'm writing a book. It's about a bunny. And I've written a song to go along with that book that sorta goes, "Wait a minute, is this a song about a bunny and a bear, or is it a song about prayer?"--so it'll be a book with a soundtrack. And [The Billy Nayer Show] is working on a new CD and we've just released the soundtrack for American Astronaut, and I've just finished the screenplay for Werewolf Hunters of the Midwest that I'm hoping to start pre-production on pretty soon. Of course, we're still gigging in the San Francisco and New York areas and working on the website--be sure you visit the gallery page, I really like the gallery page.

Any idea on a cast yet?
Well, I'd love to get Tom Aldredge to star in it--he's the stand-up comedian in Astronaut.

Is it just me or do my balls itch?
(laughs) It's just you.