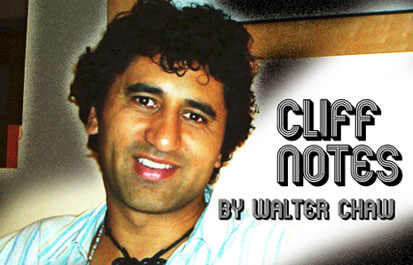 July 27, 2003|The lower level of Denver's Magnolia Hotel features as its twin centrepieces a fountain and a wet bar, an idea of water in a grotto that appropriately found me meeting Maori actor Cliff Curtis, who was in town to promote the opening of Niki Caro's Whale Rider. Dressed casually in jeans, loose shirt, and sandals, Curtis is an extremely warm, curious sort of fellow at once unfazed by his rising status in Hollywood (having appeared in numerous high-profile pictures playing a variety of ethnicities) and possessed of that particular airy disconnection of folks reared in the theatre. He's at the cusp of stardom, essentially, with leading-man good looks and an ineffable quality of fearless integrity that allows him to back away from the big-budget blockbusters in which he has found himself of late to take a small role in a small film, just because it's important to him. Simplicity itself, it seems, the call of Hollywood too often turns idealism into avarice, making a man doing the right thing for himself and his culture an anomaly--and a welcome one. With a heavy Kiwi accent and a relaxed attitude imported from the poetically-named Pacific, Curtis spoke to FILM FREAK CENTRAL, against the soft clatter of that fountain, about all manner of things in the middle of another murderous Colorado summer.

FILM FREAK CENTRAL: Your personality seems so laid back to me. What was it like working with someone as exacting as Michael Mann, or even Martin Scorsese?
CLIFF CURTIS: I loved it. I love anybody that is driven by a clear vision. They have totally different approaches, of course, but what's the same is that in their own way what they're trying to do is create an environment on the set that is conducive to everybody involved believing in what's happening. If you're concerned with truth, then I love that. If you don't really care, y'know, if you don't care what colour the wall is so long as there's no glare, then, well, that turns me right off. But with the great filmmakers, every detail matters so though I present a casual demeanour, I really admire folks that are meticulous--truly passionate--about the reality and the honesty of their work.

You've played a lot of ethnicities in your career, how does it feel to get back to playing your own in Whale Rider?
It feels like a relief. (laughs) I've been waiting for this film for a long time. It's fun to go off and put on a disguise and pretend to be someone else, but to be able to get back to myself and my culture, that was just more than really nice, y'know--it was vital. My main motivation was really to tell a story about back home, I mean, there really aren't that many that are ever made, especially for wide audiences. My next roles, though (laughs), I'm going to be a Chechen and a Cuban-American (in the upcoming adaptation of Runaway Jury with Gene Hackman and Dustin Hoffman -Ed.).

Do you sense more of an acceptance and awareness of native films or films with native subjects? Thinking now, too, of films like Atanarjuat and Rabbit-Proof Fence.
There's an opening, an awareness, and while we all love The Hulk and Charlie's Angels 2, I think that there's an emerging audience of folks who are interested in alternative stories. Movies with stories rather than movies with spectacle--I think we've gotten away from that a lot, and I don't want to say that these smaller films like Whale Rider are building an audience so much as offering an audience that's there already, and maybe not going out to the movies anymore, a reason to go back to the cinema. Atanarjuat, mate, that movie is just awesome. 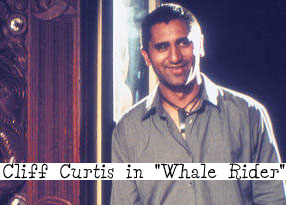 Two thoughts I hope you can comment on: the Maori culture in the past would preserve the ritual tattooing of their chieftains by preserving their heads after death--the idea of a permanent archive and the furtherance of an oral storytelling tradition that film represents for us in modernity. That, coupled with Whale Rider's similarity to John Sayles's The Secret of Roan Inish, suggests to me that film may be the most eloquent way to tell the story of Whale Rider.
Right--they'd take the brains out, the eyes out, preserve the whole head. Y'know, I feel like film is really legitimate in that it is sort of a by-product--rather than the product itself--of storytelling in the traditional sense. I think that sitting down and telling one another stories is the primogenitor of culture and society in the sense that you describe it, that film can be an offshoot of that but it isn't the ends of it, if you know what I mean. Having said that, when you call on your own lives to understand lives lived in different cultures; film, maybe better than television or even books which often suffer from the translation, provide a mainline into that power of the oral tradition.

I've read of your interest in theatre and mythology, and I think in a way that we're dancing around the topic of archetype here--can you tell me how those interests fuel film?
As I stumbled into theatre, I started to see a parallel between the Greek classics and Shakespeare and with my own culture's story traditions. Like, here's something that's just like this other thing that I remember grandma telling me. There was a whole protocol to the storytelling as I was growing up, too, where there were songs and chants, things that are sort of represented in the movie as a matter of fact. You'd have stories and importance imbued in everything you know, and that process--the theatre, organized storytelling, what have you--is a lot like sitting down in the dark and receiving those images that film can transmit.

Changing gears a little, how much racism did you experience growing up Maori in New Zealand?
Oh there was plenty of it, tons of it, I was called "nigger" as a child, y'know, sort of the usual thing that you'd expect, but I think... Well, to answer your question, "Yeah, I did."

I ask because I wonder how that experience flavours your portrayals of other ethnicities in film--particularly someone like Pablo Escobar in Blow?
That's interesting. I haven't really thought about it in that way. I'll go about that this way, that if the character isn't three-dimensional--and characters born of racism aren't, usually--then I won't do it. If there's no humanity that I can recognize in a character, I won't do it--I can't do it. But I always try to recognize that people do bad things, all people do bad things, so I never approach a character as good or bad--I don't play villains in my mind, ever. I think that most people are doing the best things, they think, for themselves and their immediate society. I'm always trying to understand my characters as people--y'know where most people are always in the mode of judging, I think to be good at my profession, I need to be more in the position of compassion--empathy. With Whale Rider the issue of race or of a divorce from culture isn't so current because there's no white people (laughs), so that's not really an issue. The story is more about a father and son, and a grandfather and granddaughter--Maori are so often just used as a backdrop, or a "blackdrop," if you will, so, y'know, if the movie is political, it's for the fact of it more than the telling.

There are a couple of high-profile Maori working in Hollywood, but they're not making Maori films: director Lee Tamahori, and Jango Fett, Temuera Morrison--
(laughs) I think Lee's next project is Maori-centered, so that's good--he's always wanted to be in Hollywood and that's his dream, but he's coming back home. There's also the sense that if he's coming back to make a film, he wants to come back with a budget and not scraping and bowing, and that's the kind of freedom that only comes after Die Another Day. And Tem has done a few projects back home that haven't made it across the sea--but for me and this film, it was just something that I had to do, I mean, if you're a Maori actor and someone comes to you with a part in the adaptation of The Whale Rider, mate, you go.

You mention "divorce from culture"--is that something that you experienced?
Well, yeah, I think so, I mean I don't even speak my own language. There was a generation where the parents encouraged us not to speak our own language, in the 1920s or so, so my father didn't speak the language with the promise that life would be better for him, for us as a culture. But it was a lie, it didn't make a difference, y'know, it didn't help us. We were declining statistics in the educational system, in the judicial system, enough so that there's been this huge renaissance in the 1970s back to our culture, back to our language and traditions--so there's been this lost generation in a way, my father's and part of mine. But I have nieces and nephews now who all speak the language, who go to culture schools and the like.