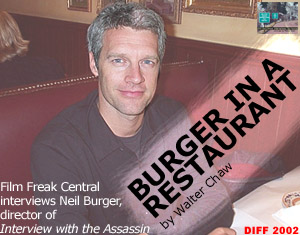 October 26, 2002|The writer-director of the nifty Interview with the Assassin, a Blair Witch construct involving suburban bogeys and the hypothetical existence of a gunman on the grassy knoll, Neil Burger arrived for our interview at Panzano restaurant in the suddenly chic downtown Denver. Tall, thin, dapper, Mr. Burger lives just six blocks from the World Trade Center site; over the course of our lunch, he recalled how large pieces of debris fell just feet from his home--and how an atrocity of that magnitude puts everything else into sharp perspective. We spoke about the massacre at Columbine High School near my house and compared notes on the funereal, vaguely psychotic atmosphere that followed our respective intimate tumults.

Right, I sort of liked both of them--good dialogue.
They're really great guys, really smart--good writers, good producers--so it was really a great thing to have talented folks to bounce your ideas off of. I knew Brian and told him what I was writing and he said, "Y'know, we're thinking about getting into producing so when you're done with the script, let me see it"--and I did, they read it, and the next day they were ready to make the movie. It's one of the good stories about trying to get the movie made. Five months later we were shooting on a 22-day schedule.

Did I read that you had actually hired a real sniper for the lead role?
No. We were looking for an unknown for all the roles--particularly that one. We didn't want any associations to previous work so as to present something that felt as authentic as possible. We did a nationwide search and turned up some pretty interesting guys--and one of the guys was actually a sniper in Vietnam. This dude had been set on fire, had been shot, had killed over fifty people, so he was the real deal, it was all written on his face. A nice, polite man who had done some very bad things in his life, so we thought he'd be perfect for the part. I worked with him for weeks and weeks but he couldn't quite get the complexity of the part and so for as incredible as this man was, he just couldn't pull it off. So at that point to cut our losses, we just went with Raymond Berry who we knew, of course, could do the work. My only misgiving with Ray was that he would be too recognizable among certain film buffs, but it was more important in the end to have a great actor.

Your film is drawing a lot of comparisons to The Blair Witch Project, does that hinder or help your cause?
I think it depends on whether you like The Blair Witch Project, really. I mean, that film opened the door to films being shot in that sort of rough style and I'm grateful for that--but on the other hand my movie is about issues of truth and power and, stylistically, the movie explores those issues also. So the story, in a way, has to be told in a fake documentary way because it just reinforces the main themes of the movie. We used DV because it was essential that if we were telling this story about Ron as an aspiring documentary filmmaker, then we needed to be true to the idea that this is his camera's point of view. We were really rigorous about respecting that first person perspective--the only time it breaks is at the conclusion when we switch to "my" camera as I interview Ron in prison.

What's in the works now?
I have one screenplay that's already written called "The Illusionist"--it's an adaptation of a Stephen Millhauser short story, set in 1900s Vienna. It's about a magician who is thought to be able to raise the dead. It's not clear whether it's a trick or the truth, but either way he's attracting this following and becoming a threat to the powers that be. It's a regular dramatic feature, but how it's linked to Interview with the Assassin is the central concern with truth versus illusion. While that sorts itself out, I'm in the midst of adapting a Dashiell Hammett short story.

Are you updating it?
Yeah--it's going to be a modern noir.

These films will probably not be shot in DV--what's your experience in other formats?
I've done a lot of television commercials and music videos--it's something I was never interested in initially, but I did all these one-minute videos for MTV promoting literacy. One with Aidan Quinn, and so on, so based on that I got a commercial contract dropped in my life which was this unexpected gift because advertising was never something I wanted or thought about doing, but it made me a better director because it forced me to work in all sorts of different situations. I've done special effects under time crunch, I've shot kids, cars, everything, so I feel like I'm ready for new challenges.

We talked a little about 9/11 and Columbine, two throughlines at this year's DIFF. How does your film fit in?
Well, clearly on the one level, my picture is about these two guys who both feel like they're nobodies and it's about what they think they need to do to make their lives meaningful. They need attention to validate what they see as their worthless lives--they both, Walter and Ron, feel like they're nothing if they're not famous so they hitch their wagons to each other. I think it's meaningful in the sense that there needs to be a difference defined between notoriety and fame--that you have to acknowledge the difference between becoming known for something worthwhile and being known for indulging in your frustrations and your darker impulses.