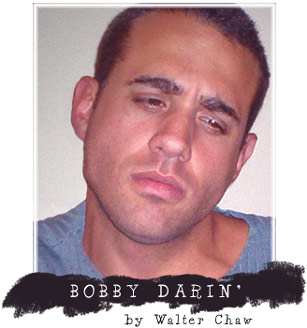 October 12, 2003|Talking with actors, especially young actors, is always an iffy proposition: the craft of acting is a difficult one to articulate, its choices obscure or instinctual, ideally, and in the case of a fresh talent, anecdotes are fewer and of less interest. So you find yourself, often, repeating the junket line: How'd you get started? What was it like working with X? Who are your influences? What's your next project? Questions, all, that only really need to be asked once in this day of fast, permanent information.

I knew before I met Bobby Cannavale--in town to receive an "upcoming actor" award at the 26th Denver International Film Festival--the answers he would give if I asked him the usual suspects. And by the weariness resting on his brow, I knew that he wasn't especially looking forward to regurgitating a set of responses for the umpteenth time to the umpteenth ink-stained wretch. So I didn't say much regarding his breakout performance in Thomas McCarthy's breakout film The Station Agent. I didn't wonder what it was like to work with Peter Dinklage and a young director. I wanted to know what he thought of Kill Bill, Vol. 1, which Miramax combined with The Station Agent on a West Coast junket; I wanted to hear about working on the stage, and about the rewards of standing out in a film that is this year's Ghost World: a subtle, devastatingly clear-eyed portrait of loneliness and yearning.

FILM FREAK CENTRAL: Tell me about your work with New York's Circle Reparatory Theater and, of course, The Lab.
BOBBY CANNAVALE: I just love the theatre, I always have. I did them in my home town [of Union City, NJ] as a kid and I was super lucky in that I was working with adult actors since the beginning, doing something like four shows a year since I was nine. I just always loved it. Then high school I was in drama, and then I moved to New York when I was nineteen, just to do "that thing," y'know--I wanted to be a working actor in New York. I didn't think the horror stories applied to me. But I did my time, y'know, I worked in nightclubs as bouncers, held down a ton of jobs and all the time I'd get shots in off-off-off Broadway plays, quit whatever nowhere job I was doing, do the play, then get another nowhere job. You just turn the crank to do what you love, and I was never in it for the money and I was never unhappy.

Your big break?
I did a play called "The Normal Heart" at La Mama, this great theatre, Sam Shepherd did a lot of his work there, and I did this play and that's where I met Lanford Wilson who really began my education in the stage. I started spending all my time at The Circle Rep and the Lab. Circle Rep's not around anymore, y'know, and that really sucks. It started in '69 and now the lack of support, the lack of fiscal support for theatre, it just sort of went away. It was the kind of place where you'd just hang around all day, working on your projects with these gifted people--I mean, we'd do a new show every week, we'd have a hundred dollar budget and every Friday and Saturday, we'd a new production was put on. That really became my work: rehearsals for three weeks, overlapped, and a new show every weekend.

You could make a living like that?
(laughs) No, not really, I've been in the business for fifteen years and only started getting paid for it in the last five. When it's the only thing you love to do, though, it's all good. I still do theatre. I'll always do theatre.

Did you capture a lot of the collaborative energy and creativity of your reparatory days on-set of The Station Agent?
That's the thing that I'm most proud of about this film, my favourite thing. Everybody in this film with the exception of just a couple of people, I think Raven Goodwin and Paul Benjamin, weren't cast by a casting director--just by a phone call. Richard Kind, I'd never seen an episode of "Spin City"...

Or, God forbid, "Mad About You".
(laughs) Right. Richard Kind I was friends with forever, had done a play with him five years ago--and Michelle Williams, I didn't know, we didn't know that she was on a TV show, we saw her in a Mike Leigh play in New York. All the cast, really, great theatre actors and friends, so I'm really proud of that, it felt like a good community, it felt like doing a play. Only in New York, you know, can you pick up the phone and say, "Hey, can you do just one scene in this thing," and they'd get in a car and drive out to Jersey and not only do a scene, but really tell the story of the scene.

That's tough.
Oh yeah, absolutely, that was really important. I mean this piece isn't just about three people, it's about a community of people, all of them in isolation. And we didn't need to clarify that for anyone--they all understood it from reading the script, from their own experience. Everyone's been lonely, right? That's what really makes this movie work, it's genuinely an ensemble effort. I'm most proud of that. You should talk to Peter [Dinklage], y'know, he was getting this award at the Marrakesh Film Festival and before you know it he was getting invited to have dinner with the king of freakin' Morocco. He said it was gorgeous--so spiritual--and Spike Jonze was there so he had a good time. This movie, the best thing, is that the people you always wanted to meet, that you always wanted to see your work, they're seeing it--and now we're getting approached by Steve Buscemi and Stanley Tucci, and Mike Nichols called to say he liked the picture. I'm just terrible at approaching people so it's nice, amazing, to have people coming to you to talk to you.

What's the state of independent cinema?
I'll tell you the truth, I never think about it. It's like acting for me, I don't have any opinions about it--it's so out of my control, I never know what people want, I only focus on what I can affect. I'm interested in good stories, in good people; if you think about it, the best baseball player only hits the ball like 30% of the time and that's the same for movies, I think. I've been in a lot of independent films, some have been distributed, undeservedly so, and some haven't, maybe deservedly so, and... You audition for so much shit, and if at the end if you can get a good movie that tells a good story, well, it's all there is and enough. I think there will always be people who are incapable of writing the big Hollywood film and those are the people that I want to work with--people like me who are just incapable of sitting down and watching Armageddon.

What do you sit down and watch?
I just saw Audition.

Have you seen Takashi Miike's Dead or Alive?
I haven't, it's great?

Awesome--reminded me a lot in a lot of ways of Kill Bill.
I just saw that, I just saw it. The weirdest thing, we were doing this press thing for Miramax and they combined our junket with Kill Bill's, so there were all these reporters there to talk to Quentin Tarantino and Uma Thurman and I'd walk in and there'd be this hush of disappointment. Only in Hollywood, right? But this once I was walking into the room to be interviewed by Leonard Maltin of all people and Quentin is walking out and he says, "God, I loved your movie, man," and I was like, "Uhhh, geez, I love you man"--and he kept telling me to see his movie, see his movie, see his movie and I said, "I want to see your movie," so before you know it, Quentin's set up a screening for me, Peter and Tom [McCarthy]--just the three of us. And afterwards, we just sat with Quentin for like an hour-and-a-half talking about it. How good...how fucking good is that movie?

I love Kill Bill.
He told me that I really needed to see this one movie that starred that girl who played Go Go. Can't remember the name of it now, but he said that you've got to see it.

Battle Royale?
Right, right, that's it, that's it. I thought she was the chick in Audition and he said no, "But that movie, that movie's AWESOME" Quentin is amazing--this energy, man, and it's genuine. He knows movies and he adores movies. He hears the music like literally, you know, he told me that he'll be hearing a soundtrack when he's writing a scene. Watching Kill Bill, I kept thinking how much better Natural Born Killers would have been if he'd done it. It's funny, switching gears here and it's connected because here I was having a conversation with Quentin Tarantino, that before this I was getting maybe a script a week and now I'm getting like twenty--nineteen of which just suck. Totally unreadable, total garbage.

All the same character?
No, I'm getting a lot of uninteresting romantic lead guys--look good and fall in love sort of garbage. I just want different parts, I wanna be that guy who people mention and they don't know who you're talking about until you say a few movies they've been in and then people are amazed that it's the same person. Guys like Paul Giamatti, Phil Hoffman...

I didn't care for American Splendor, but I loved Owning Mahowny.
He's awesome, I didn't really jibe with the story in Mahowny, but Phil is just amazing in it. I know Phil really well, he runs the Lab Theater y'know--he gave us our award at Sundance this year and kept saying that he had to see our movie, so finally he gets to see it and I'm sitting right behind him, watching him the whole time. He really got it, man, what was cool was that he laughed at all the places that we laughed making it, he got it the first time through. I really want him to direct--he's an amazing theatre director and I think he'd be an amazing film director, he has so much insight and sensitivity.

Other directors you admire?
Oh man, dozens. I'd love to work with Almodovar, with Jim Jarmusch--yeah man, and Alexander Payne, I really dig him, man. I wanna work with people who love movies, with Miguel Arteta and the Weitz Brothers, Mike White, Wes Anderson, Coen Brothers. Yeah man, that knowledge, that love is obvious and infectious and I really want to be a part of that vibe.