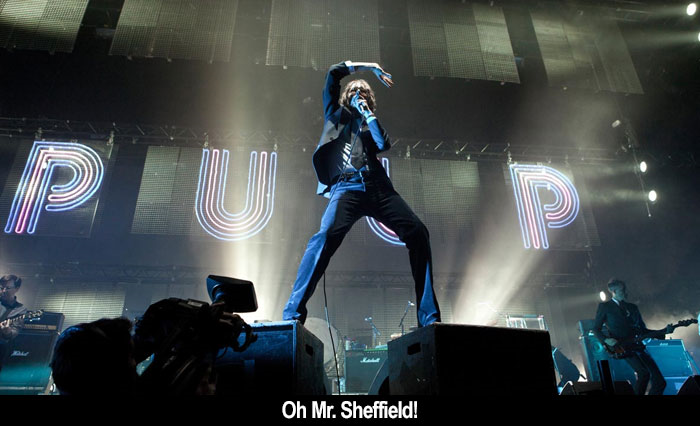 by Bill Chambers There's an episode of "The Larry Sanders Show" where tragic sidekick Hank Kingsley asks producer Artie what he thinks of him opening his solo act with Blood, Sweat & Tears' "Spinning Wheel." "It's a showstopper, Hank," Artie says, briefly raising Hank's hopes before delivering the kicker: "Never open with a showstopper." I was reminded of this at the outset of Pulp: a Film About Life, Death & Supermarkets, which opens with the title band giving a rousing performance of their "Common People" that is, for those of us watching after the fact, vicariously thrilling. "[1996] won't produce a more indispensable song," wrote rock authority Robert Christgau, and indeed, "Common People" went on to crystallize the Britpop movement and be covered by the disparate likes of Tori Amos and William Shatner. If you're a dilettante like myself, you go into this first sanctioned documentary about Pulp (lead singer Jarvis Cocker receives a "concept" credit alongside director Florian Habicht) wishing to hear "Common People," and what follows pales for the instant gratification--at least until it becomes clear that "Common People" had to be up front: for purposes of this film, it's nothing less than the national anthem.

In a very literal way, Pulp: a Film About Life, Death & Supermarkets is a movie about common people. ("Common," according to the song, being working class, though we might extend this definition to mean "not famous.") The band is the hometown pride of Sheffield, to which Pulp has returned for a farewell concert intended to both honour their roots and do over a previous valedictory performance at Sheffield's The Leadmill in 1988 that was marked by artistic compromise. The city is abuzz, and Habicht's camera turns around to face it. A girls' football team wears jerseys emblazoned with the band's logo. Sheffield Harmony, a choir made up of middle-aged women, do an unavoidably haunting rendition of "Common People" a capella. An elderly librarian recites Cocker like Keats. We meet folks old enough to sing "Help the Aged" sans irony in some kind of bingo parlour--and folks young enough that Habicht is in the process of indoctrinating them, as when he plays "Disco 2000" for two rambunctious kids who will probably come to fondly associate Pulp with these fifteen minutes of fame. The group's reach across generations and nationalities (if conspicuously white--or "sunlight-averse," as Rob Sheffield coined in ROLLING STONE--nationalities), is impressive, with one young woman having travelled all the way from the unlikely destination of Atlanta, Georgia to hear them live. A single mother, she particularly likes that Pulp sings about such things.

The message is clear: We like them because they are like us. Heck, Cocker was once a fishmonger, not unlike the tattooed butcher we meet; Cocker remembers soaking his hands in bleach after work to kill the fish stench before going out to party, only to end up smelling like a hideous bleach-fish cocktail that drove the girls away. But is Pulp really like us? Asked whether Cocker is quote-unquote common people, guitarist Mark Webber answers--intelligently but with a trace of diplomacy--that it's hardly ordinary to provoke the sorts of reactions in perfect strangers that Cocker's very presence does. A framing device of Cocker changing a tire suggests a tongue-in-cheek rebuttal to this paradox, while his grizzled appearance, his show-and-tell of a backstage medicine kit, and keyboardist Candida Doyle's frank discussion of her worsening arthritis, which almost nixed her participation in a Pulp reunion, prove the band is only too human. If success put a disingenuous spin on reprises of "Common People"--one suspects it's been a while since the members of Pulp have watched "roaches climb the walls"--then age, the great equalizer, has come along to make the group relatable once again.

Still I wonder who this documentary is for. A longish tangent about Pulp's "weird," "controversial" 1998 album "This Is Hardcore" seems oddly selective--as do really any details of the group's collective history the film opts to cover--and preaches to the cult, but it's substantial and edifying in a way that much of Pulp: a Film About Life, Death & Supermarkets simply isn't. I for one would still like to see the (more) introspective, Last Waltz version of this documentary or, barring that, a straight-up record of the performance tantalized throughout. (That's another thing: the concert footage here is, for the most part, disappointingly by-the-numbers.) While the democracy of it casts a sweet spell and speaks to Pulp's generosity and humility (yet also, arguably, to the self-aggrandizing tendencies of a brand-conscious band), one wonders if even in this era of selfie culture Pulp fans will want to see this much of themselves on screen at the tacit expense of more of Cocker, et al, especially when time with them is so precious.