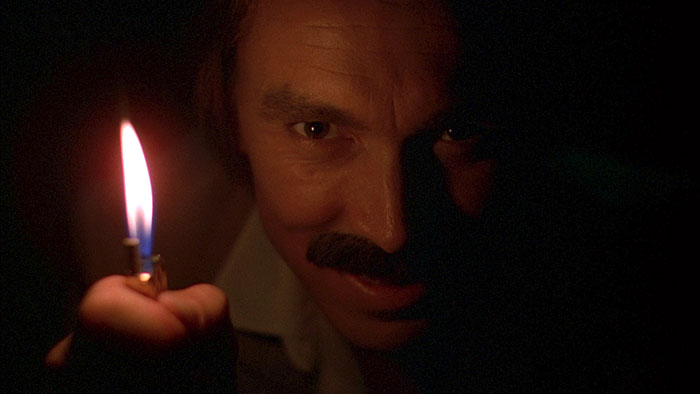 by Bryant Frazer Every 1980s slasher movie needed a gimmick, and New Year's Evil has two: a Halloween-inspired holiday tie-in and a youth-culture exploitation angle. A Hollywood-based serial killer promises to murder a victim at the stroke of midnight in each of the four continental U.S. time zones, announcing his intentions by calling "Hollywood Hotline", a New Year's Eve countdown TV show hosted by Roz Kelly (the erstwhile Pinky Tuscadero on "Happy Days") that features live performances by punkish new wave acts. The results are surprisingly watchable. The psycho-killer story is actually a bit twisty as these things go, with a mid-film reversal of fortune aiming to give audiences a rooting interest in the villain. And though the bands on screen (Shadow and Made in Japan) seem to be employed mainly to help pad out the film's 86-minute running time, their proto-Guns N' Roses sounds are not entirely disagreeable.

Despite its attempt to cash in on the slasher craze that was intensified earlier in the year by Friday the 13th (the score even swipes Harry Manfredini's eerie ki-ki-ki motif from that film), New Year's Evil was a box-office disappointment. One of the first titles released by the low-budget Cannon Group factory under the Menahem Golan-Yoram Globus regime, it was directed on a shoestring by Emmett Alston, a cinematographer making his move into feature films. As such, it's a straight-up genre programmer--another one of those early-'80s horror movies made by people with no interest in horror. Alston's approach is TV-movie-of-the-week serviceable, but the screenplay (by an old Hollywood hired gun named Leonard Neubauer) is all over the place. It starts with a straightforward set-up that has TV host Blaze (Kelly) fearing for her safety with the madman on the loose, then stirs in some family drama, including a suggestion of incestuous desire on the part of Blaze's aspiring-actor son, Derek (Grant Cramer).

Probably figuring that a bad guy who literally phones in his killings lacks the requisite sensationalism, New Year's Evil abruptly switches its point-of-view to the madman (Kip Niven), who is seen infiltrating, for some reason, a sanatorium, and affixing a hilariously thick brown shag moustache to his lip before cruising the bar scene for victims. ("There's a party at Erik Estrada's place," he promises, which is either the best or worst come-on in the history of the Hollywood Hills.) The murder scenes--a slashed throat here, a plastic-bag suffocation there--are indifferently staged, with the post-mortem victims displayed in screen-filling close-up, like desperate flourishes at a tawdry magic show or grunting money shots in a sad porno. At one point, Alston resorts to the most half-assed just-a-cat jump scare in genre history just to get a rise out of his audience. But things get a little more interesting when the creep runs afoul of a local biker gang (!) and has to go into hiding at the Van Nuys Drive-In. If anything, New Year's Evil is overwritten, what with an extended climax that has the psychopath rewiring an elevator as a murder weapon. While Die Hard in a Holiday Inn is a fun logline, on this budget the killer's endgame grows tedious.

Performances are OK. Cramer's sexually confused mama's boy displays the most brio in a scene where he pulls red pantyhose over his head and whines about his mother's emotional estrangement. Niven gives a pedestrian, basically affectless performance that would as soon suit the character of a doctor, a priest, or a cop--which turns out to make a certain sense, as his character appropriates each of those costumes during the film. The best bits are his calls to "Hollywood Hotline", when he puts on a phony voice with a high-pitched rasp that makes him sound like Christian Bale's Batman on helium; was this the inspiration for the duck-quacking killer in Fulci's The New York Ripper? Kelly is more memorable as a tough rock-and-roll chick clad in rouge, red party dress, and dog collar, but her role is utterly thankless. The worst thing about New Year's Evil is its apparent eagerness to blame women for the bad things that happen to them, and special opprobrium is reserved for Blaze, who is written as a distant, self-absorbed mother and a bad wife, too. The more anonymous victims are ditzy ladies (Louisa Moritz and Anita Crane) easily picked up in bars, a ditzy nurse (Taaffe O'Connell from Galaxy of Terror) on the clock who is readily seduced by a charming stranger, and a ditzy teenager (Teri Copley, who would become semi-famous for the TV series "We Got It Made") who narrowly escapes after obligingly displaying her breasts in the back seat of a sedan.

Reflexive misogyny is at least part of New Year's Evil's status as time capsule. It makes reasonably good use of now vanished locations on and around Hollywood Boulevard--the iconic hotel where much of the action purportedly takes place disappeared sometime in the 1990s, swallowed up by the massive Hollywood & Highland Center complex that turned the once-seedy neighbourhood into a consumerist cartoon version of itself. (Meanwhile, the Van Nuys Drive-In is now a grade school.) And the extras dancing in front of the "Hollywood Hotline" stage were real rock-and-roll kids recruited from the L.A. streets. They give the movie a touch of real character, adding an idealistic undercurrent of youthful rebellion that clashes with its pessimistic, scolding serial-killer text. Its slash-and-dash storyline is nothing special, but New Year's Evil does capture a moment in cultural history. 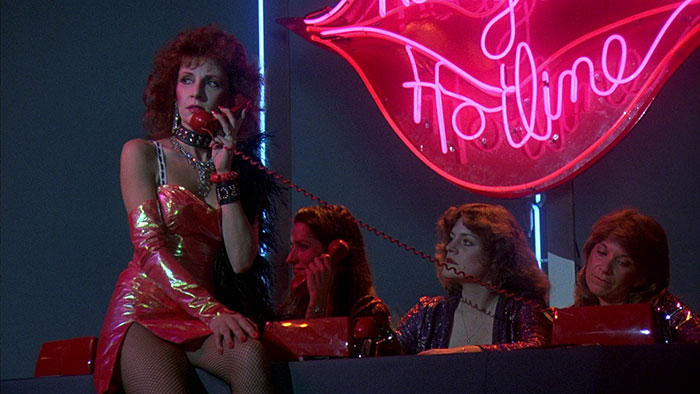 THE BLU-RAY DISC
Genre fans will know exactly what to expect from Scream Factory's new Blu-ray edition of New Year's Evil. The colourful, detailed HD transfer is sourced from elements (not the camera negative) that are in excellent shape, though not pristine, with some occasionally visible print damage, including minor dust and scratches. The 1080p image is a mite soft overall, without too much in the way of film grain, and a few of the darker scenes lack shadow detail, but it all seems consistent with the original cinematography. The sound, a mono track encoded to DTS-HD MA 2.0, is mostly crisp and clean, though Shadow's title theme, played under the opening credits (and played on loop over the disc's menu screen), exhibits fluctuations I'd attribute either to analog tape artifacts or perhaps to an aggressive digital clean-up. As usual, Scream Factory has resisted the temptation to cram the feature onto a single-layer Blu-ray, encoding New Year's Evil at a generous data rate of about 36 Mbps. (At a screen-filling 1.78:1, the aspect ratio is slightly incorrect, but to a degree that has nonetheless become a standard for Blu-ray.) Romance of the celluloid look notwithstanding, you would have been hard-pressed to find a print of New Year's Evil that looked and sounded this good back in 1980.

Extras are pretty boilerplate, not to say scanty. A new 37-minute featurette, "Call Me Eeevil... The Making of New Year's Evil", offers reminiscences from actors Cramer, Niven, and O'Connell, as well as from DP Thomas Ackerman, who made his feature-film debut here as "Edward Thomas." A good portion of time is spent covering how everyone got attached to the project: Ackerman met Alston in the U.S. Air Force, O'Connell knew Kelly from the pilot for an abandoned "Happy Days" spin-off, and Niven had his own history with Ackerman. Cramer, on the other hand, got his part the hard way--he remembers coming to his audition with a pair of stockings and a switchblade in hand to use as props. He says he nailed the performance so authoritatively that the rest of the actors waiting to read were sent home, then admits that his low-key, whispered line readings in the movie proper weren't a conscious choice but rather a symptom of his terror at being in front of the camera for the first time. And Niven notes with some delight that he's used his demented-Muppet-on-the-telephone vocal gymnastics--which he improvised on set because the gizmo designed to alter his voice didn't work--to disturb horror buffs for decades.

Although Alston doesn't join that party, he is present on a separate audio commentary, likewise encoded in DTS-HD MA 2.0. Code Red DVD's Bill Olsen does his best to coax anecdotes out of the not-especially-talkative director. Asked about selecting the bands who perform on screen, Alston mumbles something about Rodney Bingenheimer; Olsen tries to follow up but ultimately lets it drop. Alston does discuss the pros and cons of working for Cannon, recalling Cannon's attempt to lowball him on the budget for his next project so severely that he eventually dropped out. Alston also remembers the New Year's Evil production being shut down abruptly once his bosses decided he had enough scenes in the can that the feature could be stitched together in post. (Memo to beginning filmmakers relying on other people's money to finish a project: shoot your favourite scenes first.) Finally, a two-minute theatrical trailer is in surprisingly good shape but presented, for some reason, in a slightly incorrect aspect ratio that squeezes the picture vertically. 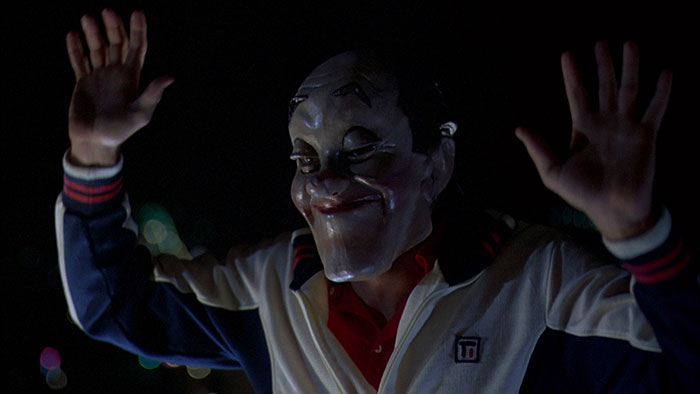