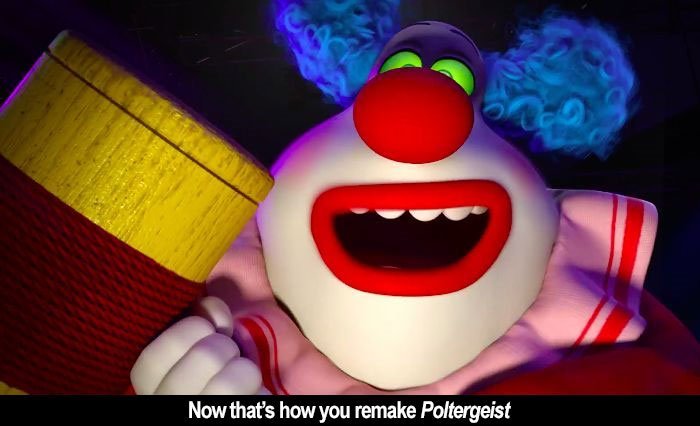 by Walter Chaw Films are objects and their interpretations are subjective. I start this way because there's a sequence in Pete Docter's Inside Out that enters an area of, literally, abstract thought--and then later, its characters accidentally spill crates of "facts" and "opinions" and have trouble getting them sorted out again. ("It happens all the time," they're reassured.) Someone brilliant once said that the measure of a work is the extent to which it's examined. Inside Out is destined to be examined a lot and, therefore, deserves a great deal of merit--but for as uncannily perceptive as it is at times, it's just as often pernicious in its gender stereotyping and establishment of straw situations that betray its core honesty. I'm reminded of Docter's similarly-flawed, similarly-schizophrenic Up, whose prologue is easily among the cinema's best silent melodramas while the rest of it is missed opportunity, curious under-reaching, and overly dependant on shtick. Docter's cited Paper Moon as a seminal film in his development. Of his three movies thus far, only his first, Monsters, Inc., deserves mention in the same conversation from start to bittersweet finish.

Inside Out follows a few weeks in the life of 11-year-old Riley (voiced by Kaitlyn Dias) as her nuclear family moves from Minnesota to San Francisco. Her dad (Kyle MacLachlan) is an investor and her mom (Diane Lane) is not, but both seem somewhat oblivious to their kid's pain during the upheaval. We're witness to Riley's suffering through the eyes, "Herman's Head"-like, of her five key, anthropomorphized emotions: Joy (Amy Poehler), Sadness (Phyllis Smith), Disgust (Mindy Kaling), Fear (Bill Hader), and Anger (Lewis Black), who run Riley via a control panel in her brain. We flash back to the forming of Riley's "core" memories--the ones that comprise her personality up to that point. And then we witness Joy battling Sadness in the main attraction as Fear, Disgust, and Anger (and finally Depression, represented as a terrifying blankness) take the helm while Riley struggles to figure out where exactly circumstance has left her.

I have an 11-year-old daughter who, recently, went through the very real trauma of her best friend moving away. Watching your child suffer through her first loss and edge closer into a world in which something like that happens was breathtakingly painful for me. In many ways, the film is so subjective for me that I find it impossible to dislike. At times, it's so personal it's actually kind of brutal--Olivier asking if it's safe before sticking a hook in a tooth. I was devastated about two minutes into Inside Out and then repeatedly throughout. I connected with moments of it so completely that I squeezed it tight. When we discover the fallacy of the idea that there are ever only truly "good" or "bad" memories and that all memories are some combination of every emotion, it lands with the elegance and simplicity of what is perhaps the film's simplest animation. When we look at the memories that Riley has stored away--and then watch as they're relegated to the "dump" where decrepit memories go to die--I was felled by the idea that we are mortal and that everything is temporary, with the best moments of our lives mostly forgotten. It's like that bit in Toy Story 3 right before the incinerator where everyone holds hands. I'm good with going into the fire. I wish I could save my kids from it, but I can't.

For the first part of the film, Joy is the hero and Sadness is the irritating emo chick you secretly hope will huddle up somewhere far away with a Morrissey loop, some Earl Grey, and a copy of The Bell Jar. There's a scene where Joy draws a chalk circle around Sadness and instructs that she stay there. And then for the last part of the film, after we meet Riley's heroic imaginary friend Bing Bong (Richard Kind) and have travelled all the way through Riley's long-term memory, through her unconscious, and spent a few stops on her train of thought, Sadness is the hero and Joy is that girl so maniacally cheerful you kind of wish something terrible would happen to her just so she'd settle down. Those parts are great. When Inside Out illustrates how necessary the experiencing of all our emotions are--and how deadly it can be to suppress even one of them--it's fantastic. But then there are the questions. There's a long sequence in which all of Riley's core memories are gone and her emotions have been shut off, leading to a third-act catalyzing event that is terrifying not just for the fact of it, but also for the idea that this little girl has had a nervous breakdown of sorts. Or how about the long sequence that ends with the eradication of Riley's train of thought? Or others that make light of the idea that the father isn't tuned into his wife and daughter because he's playing out hockey highlights in his head? Or that school teachers are disengaged and bored? Or that there are some people on the planet governed by a single emotion and therefore...what? Psychotic? Homicidal?

What I'm saying is that Inside Out is in many ways the best film ever made about how hard it is to watch your children grow from innocence into experience. It is also, in many ways, a clichéd, underdeveloped situation comedy with a workaholic bro of a dad and a sensitive stay-at-home mom (who nevertheless daydreams about the Brazilian helicopter pilot who got away) who learn to listen to their on-the-cusp-of-adolescence daughter before it's too late. The picture is on the one hand disturbingly spot-on about where to locate emotional buttons and push them--and on the other sometimes brazen enough about doing so (Bing Bong's arc, for instance) that it loses its potency for being so obviously engineered. If it were about a boy instead of a girl, it would be more useful in addressing the importance of expressing the complete range of emotions, since the stereotypical societal convention is that boys are trained to not express sadness. Because it's about a girl, it in many ways Inside Out becomes a fable for how it is that women develop the capacity to express sadness, and in that way feeds into a pretty comfortable message that girls cry while boys are mainly girl-crazy, goofy, and tend not to allow themselves to feel. Worse, because the stakes are a little girl's mental future, a lot of the slapstick routines and stand-up comedy of its middle section feel out-of-sync and slightly hysterical. It's like Fantastic Voyage or InnerSpace, but the things shrunken and injected into the hero are doing Three Stooges routines in there.

You could say that the point or the brilliance of Inside Out is that although it's brightly-coloured and ebulliently-staged, it actually contains a heart of terror and darkness. Or you could say that Inside Out is somewhat a victim of its own premise and fascination. It's such an interesting and fraught scenario that if you choose to play for keeps, as this film does, it invites a conversation about why the movie isn't better. Why does it bully an emo "popular" girl during the ending credits? Why don't Riley's parents know about puberty? Why are Riley's Anger and Fear male when the parents' psychological avatars seem gender-segregated? Is it a suggestion that maturity brings with it a solidifying of gender-based behaviours? If so, Inside Out is broaching a pretty dangerous topic in a way that attracts the wrong laughter. If you're a parent, you'll cry and, subjectively, Inside Out will be magical for being able to touch on the universal. You'll probably cry anyway, because there's a formula for eliciting tears and Inside Out works it like a pro. But Inside Out as object is dangerously close to being a one-trick pony that gets confused when asked to do something more sophisticated. Like Up was. Like Monsters, Inc. wasn't. Let's hope Docter has another one of the latter in him; maybe next time around.