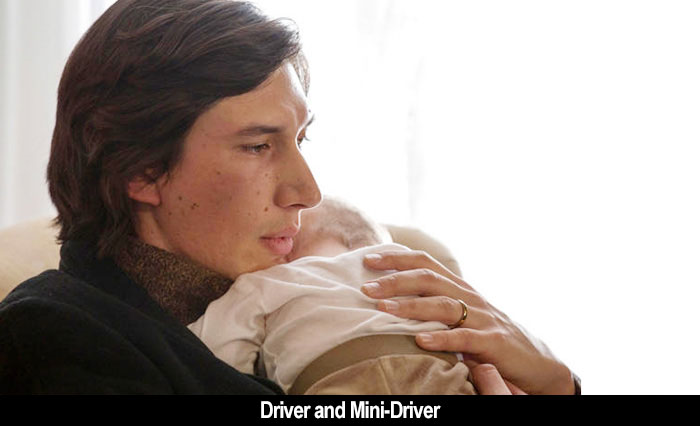 by Walter Chaw Not the sequel to the Bruce Springsteen song I was hoping for, Saverio Costanzo's Hungry Hearts is instead the moment at which I completely understand the appeal of Adam Driver. He's Jude; one night, after a particularly unfortunate biological episode, he meets-cute peculiar Mina (Alba Rohrwacher), who's forced to suffer the olfactory fallout with him. They move in together. She gets pregnant, and later we think back on the moment of conception with something like dread. Mina becomes increasingly difficult. She becomes the acolyte of various new-age schemes and trends, finding gurus to follow in the garbage she reads while their son fails to grow. Jude, frantic, sneaks away three times a day on various pretexts to feed his son meat. He's afraid the boy will die. One night, Mina wakes Jude, in a scene Costanzo shoots with a fish-eye lens, and says, "My son threw up meat. Do you know anything about this?"--and then she shrinks out of frame like that giant fish in that one Faulkner story about the bear. Hungry Hearts is a bit of the Naturalism of the Faulkner. It's a bit of the Gothic, too.

Costanzo is taking a stab at a Todd Haynes film here, but he uses camera angles cribbed from Hitchcock (the God's-eye shot at the top of the stairs with Mother, no less) and Polanski (who's felt in the claustrophobic architecture of Jude and Mina's tiny Manhattan apartment) and even Jonathan Glazer in an extended interlude he allows Mina as she trods on a mission to the accompaniment of Nicola Piovani's light orchestral score. It's strong work, Piovani's, maybe his best since Perfume of the Lady in Black--another picture about a woman's madness and delusion. Alas, Costanzo betrays in these scenes not artistry so much as a cunning, but cold, simulacrum of it. I appreciate artists who are familiar with the giants of their medium. I think it's vital. But there are only a handful of artists who can do meaningful homage. As Hungry Hearts launches into its hysterical third act, Piovani introduces a stringed overture--an obvious Herrmann tribute--as counterpoint to Jude's mother (Roberta Maxwell) frying something in a pan and dogs barking in a house full of taxidermy.

Hungry Hearts, though, isn't that kind of movie--or, at least, it's most effective when it isn't. Its first half entire is frustrating and terrible in all the right ways. Jude is appropriately in love and outraged. Driver is exceptional. Rohrwacher is exceptional. The portrayal of a person following the wrong voices is absolutely spot-on. The performances are so good, in fact, that Costanzo's inability to let there be ambiguity in where we cast our allegiances begins to feel like a betrayal of them. Medical professionals, soundtrack cues...they combine to leave little doubt as to the malefactor in this relationship. Yet if you look around those cues, you'll see a film that deals seriously with what happens when fundamentalism of any sort rewires the brain and short-circuits the rational. There's room here for a conversation about anti-vaxxers, the hipster organic movement, militant veganism, cults. Room, too, for a better understanding of how a child reorganizes a parent's view of the world instantly--how things that were nascent suggestions become all-consuming, dominant. Sometimes those qualities are good. Sometimes they're not.

What begins as all glorious possibility and two young actors staking their claim for real careers, however, ends as something that begs the wrong questions, with a final shot that not only isn't earned, but also feels insulting--and, yes, I get that it's from Truffaut. Hungry Hearts is a greater disappointment than lesser movies because it places its faith in the wrong thing (Costanzo's own screenplay and direction) at the expense of its genuine strengths (the actors). The star is its artifice when it should have been its broken humanity. Its massive irony is that a film about the slow murder of a baby instead smothers its own greatness in the cradle. There's a moment very early on when the mother says something queer to new bride Mina, something about how a human birth can't be much different from a dog birth. By the end, all that's left that's inexplicable is just how quickly Costanzo reveals he's more interested in crafting an easily-digestible calling card than something of ambiguity and courage. The picture's denouement is bad enough that it's fair to say the reason any of it seemed as promising as it did is because of how tremendous are Driver and Rohrwacher. Here's hoping they find material more deserving of them.