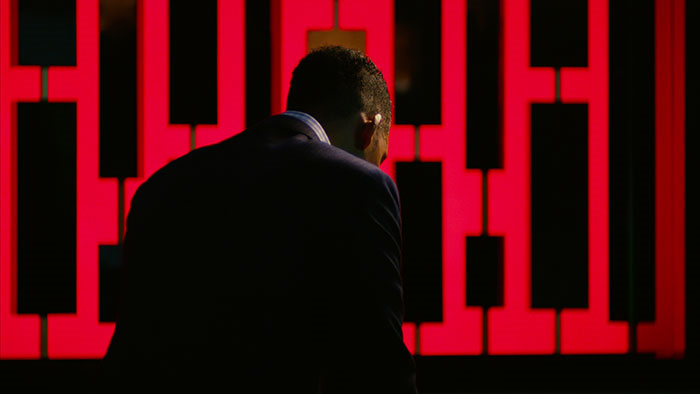 by Walter Chaw The world's most polite heist/caper/con-man Charade thing, which feels it's finally time to continue that death trudge towards completion of a Matchstick Men trilogy, John Requa and Glenn Ficarra's Focus is a studiedly-inoffensive star vehicle for Will Smith that's interesting only because of Will Smith's casual attitude towards miscegenation. Easy to say that in 2015 a black guy with a white girl isn't that big a deal, but I still can't think of too many examples where a superstar like Smith is willing to repeatedly cast himself opposite a cross-racial leading lady. Smith is even a producer of Will Gluck's intriguing Annie, which, in addition to being a very strange bookend to the surveillance-state nightmare of The Dark Knight, features at its centre an interracial love story between characters played by Jamie Foxx and Rose Byrne. I'm spending a lot of time on this, because Focus, aside from the sexy shenanigans of Smith's expert con-man Nicky and his ingénue protégé Jess (Margot Robbie) and the fact of their race-mixing in a mainstream, medium-big studio flick, isn't about anything and isn't otherwise that interesting about it.

Smith's Nicky is a legendary confidence man who one day decides to train Jess in the ways of deception so that he can score enough to retire. The big scene is where he teaches Jess how to pick pockets by dazzlingly picking her pockets while Jess acts like one of those people in a crowd on close-up magic shows.  It's funny how writing about something exhausting is exhausting. Focus then proceeds to be twisty and turny and double-crossing and false-flashback-y and oh-so-clever in a hetero Dirty Rotten Scoundrels way. It's shot in the Ocean's 12 kind of glitz, allowing us to luxuriate in Smith's matinee-idol charisma and Robbie's fifteen minutes of "it girl" in various high-priced hooker-ware, while providing middlebrow audiences a mild titillation derived secretly from what is for them still a taboo sub-genre of porn. Yes, this is one of those reviews where although I'm telling you the movie's tired, derivative, boring, and glossy, you will accuse me of not telling you those things.

Focus is the reason films like Nine Queens are revelations. It's a by-the-numbers, fill-in-the-blanks light-crime flick that not even Hitchcock could pull off once upon a time with To Catch a Thief. It's all about impossible romance in private boxes at the Super Bowl, where million-dollar side-bets go down between beautiful people and their marks, psychologically-conditioned by elaborate plots to do exactly as they've been programmed by their brilliant predators. What makes Focus not just a bore but a cheat as well is that when flashbacks diagram the set-ups and sleights-of-hand, it's revealed that none of the steps were anything the viewers could have spotted the first time through. Say what you will about Shyamalan, but even he doesn't pull crap like that. Focus isn't interesting, it's self-indulgent--your kid's magic trick, where he turns his back to hide the quarter. Whatever you could say about Requa/Ficarra's I Love You Phillip Morris or Bad Santa (based on a script by the pair), they didn't point to something as safe and neutered as Focus. Worse than bad, it's not very good: here and gone and nothing much left in its wake except the vague complication that for a film with this central pairing, no impression at all is actually progress. Originally published: February 26, 2015.

THE BLU-RAY DISC
by Bill Chambers Focus arrives on Blu-ray in a gleaming 1.78:1, 1080p transfer. Xavier Grobet's digital cinematography has a glassy clarity, neon colours, and sharp exposures that blow out whites and take black to the depths--all of which translates exceptionally well to the small screen, where this feature-length car commercial is perhaps at home. Some barely-there video noise, easiest but not easy to detect on those rare occasions the lighting goes flat, does not detract from the presentation and probably stems from the source; I imagine Focus would move a lot of Blu-ray players if showrooms just started screening it around the clock. The attendant 7.1 DTS-HD MA track--audited by yours truly in 5.1--has a precision to match the video, and the generally low-key mix does have moments of interest, such as a scene at a racetrack where car engines repeatedly pan across the soundstage and rumble in the subwoofer.

Extras begin with "Masters of Misdirection: The Players in a Con" (10 mins., HD), which introduces us to sleight-of-hand choreographer Apollo Robbins (whose own occupation is cagily described), who provides a glossary of con-artist terms helpfully elucidated with film clips and B-roll. "Will Smith: Gentleman Thief" (6 mins., HD) is the usual hagiography--the attendant "Margot Robbie: Stealing Hearts" (4 mins., HD) is a little more substantial, if only because it shows Robbie doing everything Smith does backwards and in heels, as they say. (Sometimes semi-literally: she had to spontaneously invert the movements of a well-rehearsed pickpocketing sequence after filming was relocated to the other side of the street.) Lastly, a group of four deleted scenes (8 mins., HD) includes a deathless version of Gerald McRaney's final monologue, more of Australians making Smith uncomfortable, and a neat parlour trick, while an "Alternate Opening" (3 mins., HD) finds Smith robbing a jewellery store in broad daylight by flashing that distracting Big Willie smile. Trailers for San Andreas and Entourage cue up on startup of the disc, a combo deal bundled with DVD and downloadable copies of Focus. 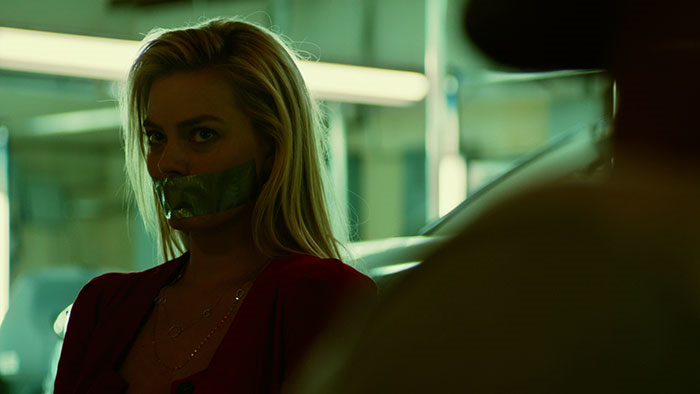