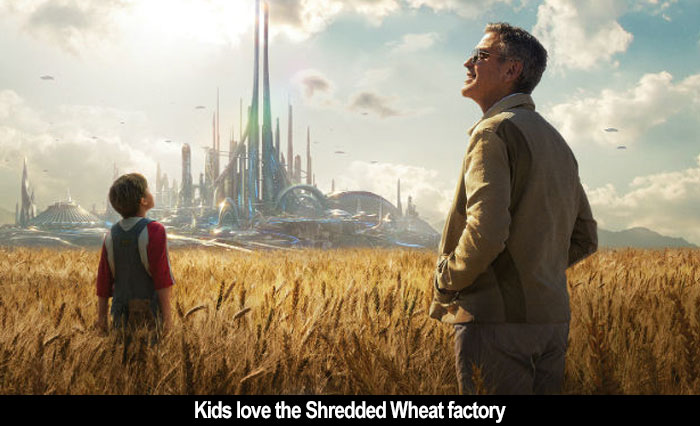 by Walter Chaw Brad Bird's Tomorrowland is a mess and it knows it. It's unruly, barely contained, just this side of completely falling apart. There are many and distracting continuity errors, and though it makes a joke of it, it's clear immediately that the movie doesn't know how to start, much less end. It has an engaging, irrepressible heroine it strands at the moment she should be doing something ("Am I supposed to be...doing something?" she actually asks), and it has a visit to a memorabilia/collectibles store run by unusual proprietors that is packed to the girders with Brad Bird ephemera of the Iron Giant and Incredibles variety. Tomorrowland has hanging about it, in other words, all the elements of disaster: winky meta references, lack of narrative cohesion, desperation-born mistakes, bad screenwriter/Nick-Riviera-bad script doctor Damon Lindelof as Bird's co-author...and yet it's good somehow. Credit Bird, who knows his way around spatial relationships, and credit a simple, plaintive idea that the world can be better if we believe that it can be better. If the sign of a great filmmaker is his ability to make a bad actor seem good, Bird is a frickin' genius for making something Lindelof worked on not an utter catastrophe. It's big and simple and corny in a Lone Ranger, Captain America, Silver Age Superman kind of way--the kind of big and simple and corny I can get behind.

Casey (Britt Robertson) is a dreamer. Her father (Tim McGraw) is a NASA engineer about to be laid off, so Casey engages in corporate sabotage to delay the inevitable. She calls herself an "optimist." She wears a red baseball cap, asks too many questions, and has a knack for knowing how things work...until she doesn't, but never mind that right now. She inherits a nifty pin from the 1964 World's Fair that gives her a vision of the titular, although forever-unnamed, Tomorrowland, a place where Earth's intellectuals have secreted themselves because the rest of Earth is too venal and obsessed with death to deserve them. There's something tricky about this: 1964 is after the Bay of Pigs and the Cuban Missile Crisis and the first American casualties in Vietnam and the assassination of JFK. The World's Fair that year, looking forward, was also overcast. Bird positions Tomorrowland as two possible futures: the one where JFK's promised moon shot was followed by decades of optimism gradually declining into an objectivist nightmare of intellectual elitism; and our future, in which we were immediately drowned in Altamont, Watergate, the paranoid '70s, Reagan's '80s--by the virulent rise of anti-intellectualism. Tomorrowland would be a fascinating feature to pair with the similarly large, similarly corny, similarly flawed and yet emotionally effective Interstellar.

It's tricky, because both timelines in Tomorrowland have led to the apocalypse and the only key is a throwaway line where crusty genius Frank (George Clooney) sneers at bureaucrat Governor Nix (Hugh Laurie): "Just like Nix, no new ideas." The only currency of value is the nurturing of the New Idea--stagnation is death. Bird's The Incredibles is both a revolutionary entertainment and a controversial one, since it talked frankly about how if everyone's an Incredible, no one is incredible. Like notions lace his Ratatouille and his Cold War masterpiece, The Iron Giant. They're unpopular notions in the modern conversation, where everything is possible and anyone can be great. No, they can't. In the first five minutes of Tomorrowland, Casey's offscreen and dead-for-most-of-it mother (Judy Greer) says of little Casey's aspiration to one day visit the stars, "What if you get there and there's nothing?" Casey responds, "What if there's everything?" A groaner for sure, and the film has Frank groan accordingly, but it's the basis for Bird's worldview and he uses it in Tomorrowland as the invitation to talk in a broad binary. The world is ending because we are in love with the idea of apocalypse--we were in the '80s and we are again in the modern climate-change/terrorist Valhalla dystopia. What if we were in love, instead, with hope and aspiration? I admire a montage where Casey, in high school, sits through class after class of doomsaying teachers, her hand valiantly upraised and pointedly ignored.

It bears repeating: Tomorrowland is a mess, and it knows it. The picture bears the scars of some wild thing packed into a crate and refusing to be broken. It offers a hopeful ending but a deeply ambiguous one--and if you were cynical about it, it sort of looks like that Coca-Cola advert about teaching the world to sing. But Bird is too talented, and too singular, a filmmaker to offer up these images without that certain, single-minded cohesion a true auteur provides. Like his other films, it has a misfit "chosen one" as its hero (even Tom Cruise's Ethan Hunt, after all, is left exiled at the end of Ghost Protocol)--one who is called to action, who saves the world because he is guilelessly, mysteriously gifted and shows no false modesty about it. It's a celebration of intelligence and whatever birth defects result in an elevation of said intelligence. Tomorrowland prizes problem-solving ability and mental agility. And it offers an intriguing artificial intelligence (Raffey Cassidy) who joins Ultron and Ava as new explorations of the limits and morality of our creative impulses.

Of all the names Tomorrowland drops, the one that sticks is Jules Verne. Not merely for the movie's steampunk/"Bioshock: Infinite" aesthetic, but for its spirit of exploration and discovery as well. Remembered now as something like a French DaVinci, creator of fabulous machineries and teller of grand adventures, Verne is Bird's closest analog for me in terms of texture and feel. His best character, Captain Nemo, is a creature obsessed with invention. A loner, a scientific genius, he hated imperialism and championed the common man against oppression. He is Bird's muse. Tomorrowland is simple in the way that Verne's books are simple. Not "politics," Tomorrowland wears its idealism on its sleeve, this belief that the individual can triumph against the forces of man or nature that conspire to crush him/her. Frank is Nemo, Casey the interloper narrator who intrudes on his Nautilus and forces him back into the world. Nemo's motto is "Mobilis in mobili," or "motion in motion" (or "changing amidst changes"); it's something Frank has rejected in favour of his lonesome fatalism, though he's stirred to remember it when Casey appears on his doorstep with lost technology and a refusal to succumb.

There's an arresting scene where the Eiffel Tower reveals itself to be a literal beacon. There's another, the highlight of the film, where Frank holds the fallen body of an ally and floats above an idea that it might not be too late for him to plow a different path in the world, but only by discarding the detritus of his past. Tomorrowland is Bird's 20,000 Leagues Under the Sea. It's his sloppiest picture by far (what's happened in that bathtub, exactly, that allows its occupants to swap places mid-flight?) and doomed to be his most divisive, too; but its message that being smart is good, that having ideas is good, and that hope is definable as the tension between the two is as bright and well-met now as it was in any of Bird's earlier films. Tomorrowland is a mess, but I get it: Sometimes the biggest, simplest things are the hardest to say.