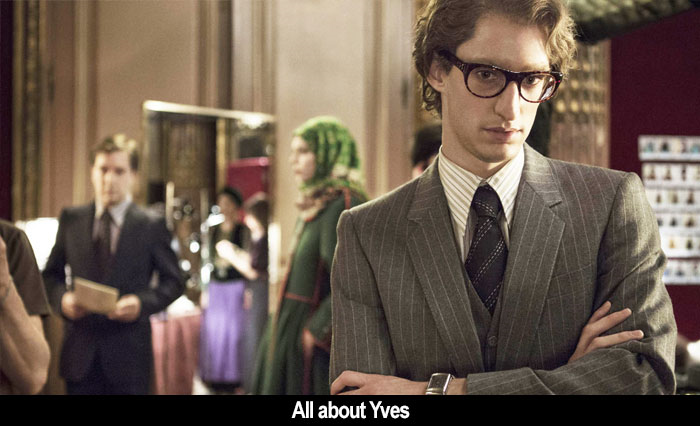 by Angelo Muredda Bertrand Bonello enters the postmodern biopic sweepstakes with Saint Laurent, no less than the third chronicle of the titular French designer and haute couture icon in as many years. With regrets to Pierre Thoretton's understated but chilly L'amour fou, which comes at its subject through the reminiscences of his lifelong professional and personal partner Pierre Berge, Bonello's project is almost certainly the most fetching (thanks in no small part to costume designer Anais Romand), marrying a contemporary fixation on the limits of biographical storytelling with the sort of impressionist brushstrokes the Matisse devotee might have appreciated. In the wake of filmmakers as disparate as Todd Haynes and Abel Ferrara self-consciously toying with the limits of the biopic form, ostensibly killing dynamic subjects by pinning them to the wall, Saint Laurent isn't as radical a work of genre subversion as some of its adherents claim, but it sure as hell is beautiful, channelling its subject's hedonist spirit and delicate aesthetic sensibility in roughly equal measure.

Though one could charitably call this 150-minute profile digressive, Bonello's work here isn't necessarily undisciplined for vacillating between Saint Laurent's maximalist and minimalist inclinations. Rather, it's a product of his obstinately opaque hero, whose boyish good looks suggest a bildungsroman the filmmaker turns out to have no interest in exploring. As played by the appropriately handsome and remote Gaspard Ulliel, a former model who seems to channel his preternatural sense of being stared at into a man people are constantly looking to for approval, Saint Laurent only really registers as a person through his inconsistencies. He's at once kind and curt with his staff and hangers-on, a loving and an aloof partner to Berge (Jérémie Renier), and, perhaps most glaringly, as reckless in his substance abuse as he is crisp in his design ethos, at one point citing a desire to achieve an outfit "as short, neat, and precise as a gesture."

Treating Saint Laurent as an inscrutable stained-glass window admittedly yields little in the way of a narrative throughline, due partly to a hopscotching narrative that jumps between the designer's '70s career and personal lows, his '60s prime, and his late-2000s degeneration into ill health. Still, it's probably for the better that Bonello appreciates such contradictions as the stuff of interesting people's lives more than he wants to resolve them in any one way. His refusal to make Saint Laurent the person legible beyond his taste extends in an ambiguous way to his own chameleonic style. The film restlessly shifts from loud, tightly-framed dance sequences to goofy state-of-the-era montages that splice archival footage of May 1968 with blissfully apolitical modelling sessions, and to garishly-lit pill hangovers--including the most excruciating scene of animal endangerment screened in some time. It's tempting to write off such formal variety as a glib one-to-one correspondence between Saint Laurent the rootless man and Saint Laurent the rootless biopic. Whatever the reason, the approach is engagingly baroque, however inconcrete the movie's structure.

That isn't to say this is an insubstantial, purely kaleidoscopic affair. Bonello makes a lot, maybe too much, out of Saint Laurent's ambitions to bring a touch of Proust into his design work, triggering involuntary memories of things past via his delicate fabrics. (He might have done without a minor character's pedantic, voice-of-God assertion that Saint Laurent is Proust and Jean-Paul Gaultier is comic books.) Bonello is also smart about positioning his subject within a continuum of other visual artists without belabouring the connections. Saint Laurent's late admission that he is at best a Matisse knockoff in another form, and that all great designers may well be mediocre painters, feels less like a self-pitying bit of career retrospection than a real insight into how artists translate their inspirations, or try to, across mediums. In this light, one can't help but read the climactic reveal of the designer's 1976 collection--his resurfacing after an extended period of addiction and depression--as Bonello's own Saint Laurentian attempt to translate fashion into cinema, albeit via the hoary mechanics of split-screen montages.

Yet for all its canned formal wiliness and backdoor insights into art and design, Saint Laurent is ultimately affecting. Ulliel isn't such a dynamic presence, but he doesn't actually need to be. There's a birdlike delicacy to his bearing that makes his descent into sleepwalking and unbidden memories of lost loves heartbreaking in spite of the thinness of his character and the hollowness of others' platitudes about his genius. That this shy, tall alien and Proust fanboy with thick frames should also be one of the most influential designers of the century is perhaps Bonello's best contradiction.