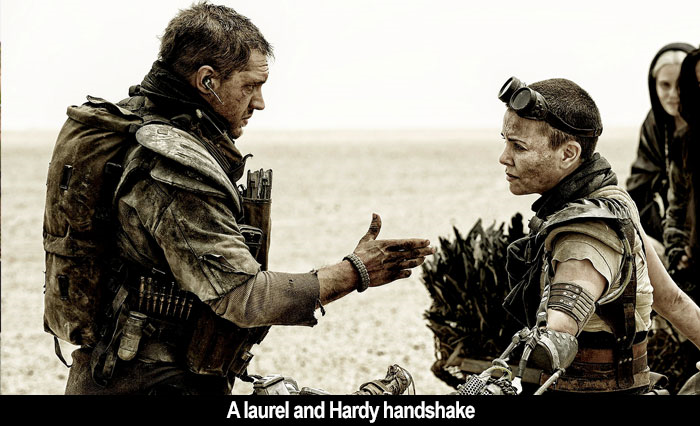 by Walter Chaw The best parts of Mad Max: Fury Road (hereafter Fury Road) are, as it happens, those that are most like Mad Max Beyond Thunderdome. The parts about civilization rising from the ruins of an atomic war; the parts about misplaced hope and how unlikely alliances can sometimes speak to the human tendency towards faith and the possibility of eternity. The series was always about the myth of the lone hero, striding into whatever situation and facilitating a return to a prelapsarian (pre-poc-y-clypse?) state before disappearing again. Shane, for instance, where a child's development--or in the case of Thunderdome, a great many children's development--has been mythologized as the intervention of a mysterious stranger who appears from nowhere and returns there. Max is a metaphor. For courage, heart, intelligence, the yearning for home; he touches in turn each of The Wizard of Oz's quartet of self-actualization while keeping the Wizard behind the curtain. If there's a specific modern mythology to which this series most obviously hews, it's the Arthur myth, and in Thunderdome, when asked if he's the return of the fabled Captain Walker, Max responds that he isn't. But we know that he is.

The worst parts of Fury Road are when Max (Tom Hardy) is given a tortured "Max Payne" backstory complete with flashbacks and, almost unforgivably, a moment where he articulates his metaphorical role and offers Furiosa (Charlize Theron), the real hero of the piece (just as the feral kid was the real hero of The Road Warrior and Savannah Nix was the real hero of Thunderdome), an outstretched hand with an offer for "redemption." Always before, Max's motivations were mysterious. He's Han Solo from Star Wars and The Empire Strikes Back. Here, he's Han Solo from Return of the Jedi. The worst parts, in other words, are when the film takes a minute to aspire, itself, to the kind of legacy its characters are seeking. A self-conscious Max is perilously close to a meta-Max; I'd leave that stuff to Joss Whedon. Better are moments when his blunderbuss from The Road Warrior resurfaces in the aftermath of a dust storm, or when one of the characters somehow recovers that film's music box. It doesn't have to make sense. It doesn't have to be linear. These are stories that comprise larger legends: avatars emerging from the mists of history now and again and changing everything, and did anyone get his name? In Fury Road, he takes a minute to tell Furiosa his. It's an aging filmmaker's one concession, in what is otherwise a rough, anarchic beast of a movie, that he recognizes his mortality and doesn't want to end up some Ozymandias of the Outback.

The flaws were jarring enough the first time I saw it to neutralize Fury Road's unbelievable action sequences and exhilarating perversity. The second time through, I let it go. What landed for me on rewatch is that Furiosa, despite being played by one of the most beautiful women on the planet, is completely non-objectified and celebrated for her strength. The film doesn't desexualize her, rather it finds strength in her being a woman. If The Road Warrior is about a man avenging his dog (and a child becoming the leader of "the great northern tribe") and Thunderdome is a children's crusade, Fury Road is about how women are resourceful, powerful, strong, and, hey, it's nice to have your help, fellas, but we got this. There's a key night scene (make of it what you will, Jungians) where Max is using up precious sniper-rifle ammunition, missing an oncoming threat, when, wordlessly, he passes the rifle over to Furiosa, who with the last bullet quiets the pursuit. It's a landmark moment, I'd say, and I don't know that there's been anything quite like it since a similar beat in Alfred Hitchcock's original, 1934 The Man Who Knew Too Much. Theron is spectacular in this film, almost washing away what Ridley Scott asked her to be in Prometheus. In Fury Road, she's found a director who lets her run serpentine. In Fury Road, she is literally given the blood of Mad Max. I hope the franchise continues with Hardy, but I wouldn't mind another franchise that's just Furiosa.*

Fury Road is about a pair of matriarchies. It has images of seeds and earth and there's much talk of "green" places, pregnancy, progeny in warlord's heirs, and "war boy" packs jockeying for favour from their elected father. There's a suggestion that chief baddie Immortan Joe (Mad Max's own "Toecutter," Hugh Keays-Byrne), radiation-sick and Harkonnen-grotesque, is incapable of spawning healthy babies and so has spirited away a harem of "breed stock," the better to increase his chances. Yet they run from him, declaring "We Are Not Things" and asking "Who Ended the World?" Well, men did. Powerful men, it's implied, are the root of all evil. So is organized religion. "Who are you praying to?" one of the brides asks another late in the film. ("Anyone who'll listen," she says.) It's better to believe and to find both courage in that and the will to act than to wait and seek salvation in the life of a sheep. There's a conversation to be had about how these brides are highly-sexualized, how they're introduced essentially engaging in a bikini carwash, as well as the clumsiness of their shedding some truly evil-looking chastity belts. It's not a simple conversation, though, since they each prove themselves to be agents of their own destiny--and badass to boot. Sexuality shouldn't be weaponized by either side. Fury Road isn't a noir with a War Rig-full of fatales. The only time you could vaguely accuse anyone of using their sexuality as a weapon is when Splendid (Rosie Huntington-Whiteley) shields her friends with her unborn child.

More, Fury Road actually has breasts that fulfill their biological function. There's a hint of Grapes of Wrath when Immortan Joe's civilization seems to run on hothouse-grown greens and harvested mother's milk. It's the mothers, in fact, who turn on the water at the end, announcing a more benevolent--yes, socialist--future under the auspices of a female leader or a group of them. This is not even mentioning Max, or that the allies Max, Furiosa, and the brides encounter who propel the third act are old women armed with army rifles and bags of seeds. "That," says Max, pointing at a naked woman suspended in an open enclosure up in the air, weeping for help, "is bait." He gets it. Women are not kittens stuck in trees. Make no mistake, Fury Road is deeply political, and it wears those politics on its sleeve.

It's also the best kind of action flick in that it provides action in spades but doesn't stop character development for it. Ebert once talked about how the climactic swordfight in Rob Roy was an instant classic because it had the intelligence of a chess match. I would say the same about Fury Road's three, no, four...five?...extraordinary action sequences. It's not empty spectacle like the Transformers movies or Age of Ultron, where everything pauses while we get the jangle out of the way. Each set-piece features a central image (a sandstorm, a chain, motorcycles, a quagmire, a band); nothing is introduced that isn't paid off in a way that would have made Chekhov immensely proud (eg. a flare-gun, elephantiasis); no edit is obfuscating or in vain. Max evolves throughout, and while Hardy isn't making me forget Mel Gibson, he does move the character from taciturn Man of Action to taciturn Guy Who Cares. Scoundrel to General, I guess, though for my money Max should be catalyst, not catalyzed. (Take note: I also don't want a tortured backstory for John Wick. Killing his dog is motive enough for the Baba Yaga.) Fury Road is fantastic as an example of lawless, innovative storytelling; less so as journey of the hero. Well, unless that hero is Furiosa. The first time through, I was trying too hard to fit Max into my memory of Max. On a second viewing, I saw Max as a tool used to tell a larger story about women--men have had their chance. When Max vanishes back into the Wasteland this time, it's because the world doesn't need him. Not because it did and now it doesn't, but because it never did, save perhaps as a blood-bag or something. Of all the mad things in Fury Road, Max's obvious status as a dinosaur on the verge of extinction may be the maddest.

*It bears noting that Furiosa has lost her left arm and had it replaced with a cyborg attachment. It reminded me (spoiler) of the penultimate scene in Ex Machina where android Ava loses her left arm. Is there commentary here about how women are working at a disadvantage? Often at the literal hand of men? In Age of Ultron, it's the Andy Serkis character who loses an arm. I'll be curious to see if the motif surfaces elsewhere.