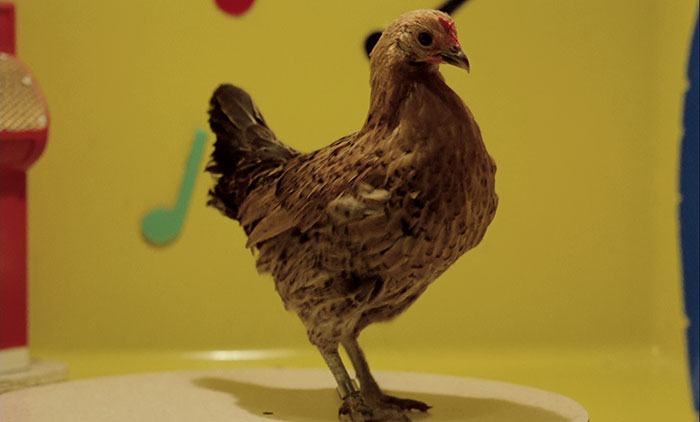 by Walter Chaw I love this film. I'm enthralled by it. And every time I revisit it, it has a new gift for me. Bruno S. plays the titular Stroszek, a street performer released from a two-year institutionalization and left to his own devices with hooker girlfriend Eva (Eva Mattes) and pal Mr. Scheitz (Clemens Scheitz). There's a transparency to the performances that transcends naturalism: you sense that the actors are not only playing themselves (more so than usual), but also that they're playing themselves as allegorical figures in a metaphor for their lives. It's Spider, but it's at once more and less expressionistic than David Cronenberg's film--and while the long, quiet, empty reaches of living in the giant abandoned warehouse of a mind in flux is a constant melancholy the two films share, there is something in Stroszek, crystallized in the haunting image of a premature baby pawing at its bedding, that does more to traumatize the human condition. When the film's heroic triumvirate flee Germany for the gilded shores of Wisconsin ("Everybody's rich there"), in a migration that reminds a little of Aguirre's doomed hunt for El Dorado, Stroszek is suddenly a picture about pilgrimage to a holy land that exists solely in the windy spaces conjured by the promise of westward expansion.

They end up in Ed Gein's hometown, a place caged beneath endless flats capped by endless sunset skies where the locals are achingly sincere and childlike in their polite discomfort. (It's a look at Americans as kind-eyed aliens that serves as an almost unbearably piquant counterpart to New German Cinema-mate Wim Wenders's Paris, Texas.) A scene where the three, led by a Wisconsonite, skate along the glass of a frozen pond in search of a sunken tractor and possible murder victims who have ridden it into the drink speaks to how the characters are dwarfed by a sort of flat, indiscriminate nature as well as consumed by the senselessness of life and death. "Nobody kicks you here," Eva says to Stroszek. "Not physically. Here they do it spiritually." The link between this and other modern masterpieces of disconnection (Fargo comes immediately to mind) is thus cemented. The closing sequence--in which Stroszek, holding a frozen turkey carcass, visits a nickelodeon packed with dancing and piano-playing farm animals--touches on Herzog's chicken fetish, natch, but works, too as a mute commentary on where we come from, where we go, and the embarrassing crap we do to fill up the empty spaces in-between.

THE DVD
Anchor Bay's immaculate 1.66:1 anamorphic widescreen presentation of Stroszek embraces the unmistakable '70s tone of the piece, though I have my doubts that the film has ever looked better than this. The DVD instantly renders previous home video transfers obsolete, at least--ditto the DD 2.0 mono audio (in German with English subtitles), which sounds loud and clear and, for lack of a better descriptive term, bright. Herzog and Norman Hill chime in with another packed, informative commentary, the best parts of which do, in fact, involve Herzog and chickens, with the director revealing that the beasts making spectacles of themselves in their carefully-manufactured environments so disquieted his crew that they left the Bavarian to do his own cinematography for the final sequence. A trailer, lengthy production notes, and Anchor Bay's fantastic Herzog bio round out the presentation. Originally published: May 11, 2005.

THE BLU-RAY DISC
by Bill Chambers Shout!'s Blu-ray presentation of Stroszek isn't a fiasco on a par with their Nosferatu, but the 1.66:1, 1080p transfer does exhibit some of the same problem characteristics, including one of the bluntest drop-offs to black I've seen since the BD release of Sudden Impact and a frustratingly mercurial use of DVNR, though large portions of the film retain their grain, and more--maybe even most--shots would look adequately cinematic if not for the crushed shadows, which artificialize the movie's chiaroscuro images. Saturation is a bit synthetic in its vibrancy, but the poppiness of the palette is not ungratifying--although the Wisconsin light is curiously mauve when filtered through interior windows or bouncing off skin. Fine detail is rarely lacking. While the 2.0 DTS-HD MA mono audio sadly does betray minor hiss as reported elsewhere, it doesn't want for clarity and the eclectic soundtrack is sufficiently stout. As for extras, Herzog's excellent Norman Hill-moderated commentary returns, along with Stroszek's lengthy, subtitled theatrical trailer (in 1080p).