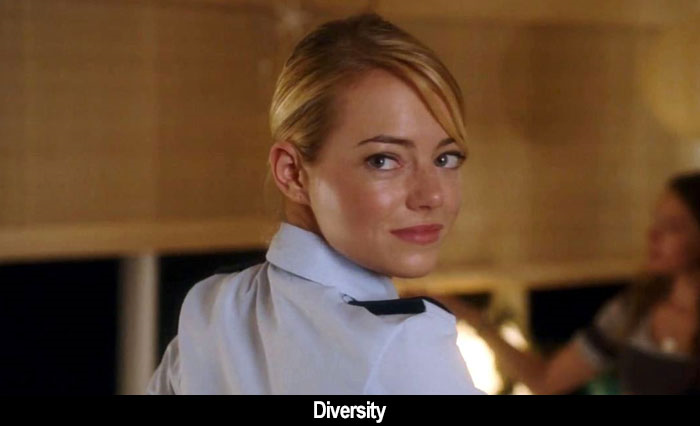 by Angelo Muredda Few films have predicted their own failure as adroitly as Cameron Crowe's Elizabethtown, where Orlando Bloom's wayward shoe designer foresees his imminent sacking by dubbing his new DOA product--a billion-dollar boondoggle--a "fiasco." Elizabethtown is a fiasco, all right, but it has little on Aloha, which has to be the quintessential Cameron Crowe film, the one for the time capsule, in its baffling configuration of good intentions and bad execution--and its near-radioactive warmth in spite of it all. Like Elizabethtown, Aloha does us the courtesy of signposting its total structural collapse right in the text; and like Elizabethtown, it's so earnest that it's hard to look away even after the warning. This time the tell is in a sloppily-engineered climactic scene that sees the hero hacking into the satellite he's just helped launch from the Hawaiian base he's secured for the military, destroying the thing he's put up in the air himself, for reasons barely known, by blasting it with a sonic cannon composed of all recorded sound in history. (This being a Cameron Crowe film, "all recorded sound in history" consists of sentimental movie moments from Crowe's youth and snippets of Bob Dylan's discography.) What better metaphor could there be for Aloha, a bad-idea cannon indiscriminately blasting mawkish sentiment and choice soundbites, and compromising its own structural integrity at every turn?

Dumb as it turns out to be, there's no denying Aloha's ambition to combine the American military satire of Catch-22 with mentor James L. Brooks's voluble romantic comedies about smart people made dopey by their feelings, the latter of which is much safer territory. Bradley Cooper stars as Brian Gilcrest, a disgraced defense contractor who's had a rough time at Kabul--that's as deep as Crowe is willing to wade in American foreign policy--but is granted another shot by moneybags industrialist goon Carson Welch (a bored Bill Murray), who sends him back to Hawaii, the site of his greatest career accomplishments (and long lost love, Tracy (Rachel McAdams)), to oversee the launch of a satellite from a new military outpost deep in local territory. Before he can get back into the military's good graces, though, Brian has to secure a blessing for the launch and quell the native Hawaiians' lingering concerns, with a little help from his new partner and lettered Air Force captain Alison Ng (Emma Stone).

Much has been made in the lead-up to Aloha's release concerning its apparent white-washing of Hawaiian natives in favour of an all-white romance on occupied soil. As you might expect, the film is a bit more complicated than the early word would have it, and in some ways, worse. Consider that Ng is revealed to be of mixed-race origin, a quarter Hawaiian whose ties to "her" land make her an ideal negotiator--the locals turn out to want free cell-phone service for the community in exchange for their silence--and champion for the political neutrality of the skies, one last colonial outpost that Welch is eager to branch into by any means. It's bad enough that the lily-white Stone plays Aloha's only significant person of colour, with the community leader relegated to a cringe-worthy Iron Eyes Cody moment as the satellite soars over the field he's surveying. What's worse is Crowe's goofy white liberal guilt over his own dodgy premise--his need to have Ng spout ancestral wisdom about land claims and sovereignty as if applying a soothing balm over the movie's own deeply colonial project: to reinstate white fuck-ups like Brian as benign guardians over territory to which they have no entitlement.

As weak as the military redemption thread is, there's something ineffably charming about Aloha's daffiness, as well as its inability to commit to either an excoriating critique of the way American business tries to colonize everything it touches or a light romantic comedy about damaged people and young upstarts. As in Magic in the Moonlight, Stone has been miscast by a flailing auteur as a wish-fulfilment object for down-on-their-luck gents, her comic chops and singular timing wasted in a role that has her playing lovesick lackey to an older male lead. But there's real complication and even some wisdom in Brad's tentative reconciliation with Tracy, who's going through her own marital problems with taciturn Air Force pilot Woody (John Krasinski), which Crowe seems to care about as much as the increasingly slapdash space militarization plot. In a mostly silent performance, Krasinski gets to do some real acting as a hollow man with strangled desires and no social skills, parlaying his mugging from The Office into an unexpectedly affecting performance. You wonder why Crowe didn't just run with this thread about a certain kind of man's penchant for heavy silence and its toxicity to relationships, since it taps into his generic strengths much more than the limp efforts at satire and political point-scoring. Yet if Aloha had a better sense of what was gold and what was dross, it wouldn't be much of a Cameron Crowe movie.