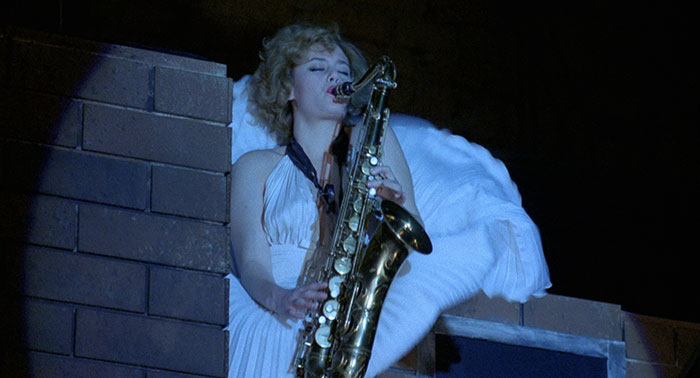 by Walter Chaw After years spent working alongside such luminaries as Joe D'Amato, Lucio Fulci, and Dario Argento, Michele Soavi made his directorial debut with 1987's StageFright (onscreen title: StageFright: Aquarius)--not an update of Hitchcock's underestimated Jane Wyman vehicle, but a carrying of the giallo torch from one generation ostensibly into the next. For the uninitiated, giallo, when done right, is a perpetual-motion machine that runs off its own mysterious energy. Taking its name from the yellow covers of lurid Italian paperbacks, films in this genre split, broadly, into two sub-categories: the ones that give a passing nod to ratiocination; and the ones that don't bother to make any rational sense at all. StageFright is of the latter school, aligning it with stuff like Argento's Three Mothers trilogy over something like his Tenebrae (on which Soavi served as second assistant director). Sense is antithetical to StageFright. It's a vehicle for atmosphere and delivers it in spades.

Sporting a colour scheme equal parts Argento and Joe Dante, Soavi borrows moments and kills from sources as varied as The Texas Chainsaw Massacre 2, Body Double, Ms. 45, Tenebrae, Carrie, and Opera. A sequence in which the Final Girl walks down a long hall towards the climactic confrontation has elements of the hallway sequence from A Nightmare on Elm Street and of Josette Day's weightless procession through a corridor of curtains in Cocteau's Beauty and the Beast; and then at last, at the end of her endless walk, she discovers her own transformed Marilyn Chambers, rotting away in a shower stall à la Rabid. The picture's patchwork of influences betrays a tendency to visual hoarding that Soavi wouldn't shed until, arguably, his acknowledged masterpiece, Cemetery Man. Still, if StageFright isn't necessarily much more than a pastiche piece, it at least engages in its imitation with a brutal absurdity. It's so invested in its dream logic that what it all boils down seems to be this psychotic reassurance that the maniac in the full owl headpiece just wants to do a bit of stage blocking with the corpses of his victims.

Late at night, our heroine Alicia (Barbara Cupitsi, of Argento's Opera as well as Cemetery Man) soldiers through her paces as the star of an awesomely terrible-looking musical featuring an owl-cowled murderer, despite a sprained ankle or something. She's afraid of dictatorial director Peter (David Brandon) replacing her should she go to the hospital, but of course her bestie on the production talks her into sneaking next door to the insane asylum to get checked out, thus attracting the murderous attentions of some wackadoo who spends the next 70 minutes or so picking off every last Staying Alive-ready member of the cast and crew. There's a pickaxe slaying, there are a couple of halvings, there's a shooting or two, until finally our killer--did I mention he's wearing a giant owl head? He's wearing a giant owl head--arranges a tableau morte, enjoying the fruits of his labours as its centrepiece. There's something of Wyler's The Collector in StageFright, that aspect of awful design and rage for accumulation, except that it's more like DePalma's Phantom of the Paradise in its exploitative excess and exuberance.

It's hard to dislike a film as energetically askew as StageFright--one that understands giallo as the product of its carefully-constructed components. Argento was never so good as when he was drawing inspiration from, and flat-out imitating, Hitchcock. Arguably, it's when he began aping lesser artists (like Gaston Leroux and Bram Stoker and, fatally, himself) that he began his precipitous and to-date-unslowed decline. Soavi's first feature functions as both shrine to and excavation of its sources and the filmmaker's inspirations. It belongs to a fascinating, specific, brief sub-genre of a sub-genre: hijacked, indigent art. Like collage, or the sampling in rap and hip-hop, or graffiti, or tribal tattoos from tribes that are not yours, appropriated into the flesh, as it were. The first two-thirds of StageFright are slow bordering on tedious, yet they're stage-bound in a way that's indicative of a kind of thematic wisdom from Soavi, who must know that his strengths don't lie in the direction of dialogue or performance. He'll revisit the meta approach most famously in Cemetery Man, though it seeps into The Church as well. The last third of StageFright is carnal bliss, with kills vicious and inventive. Soavi makes full use of the scaffolds above the stage, the drop-down below the boards, lost keys, turntables, and a soft flurry of feathers that reminds, of all things, of the revolution sequence in Zero for Conduct. It's an EC Comic, as all great gialli should be. 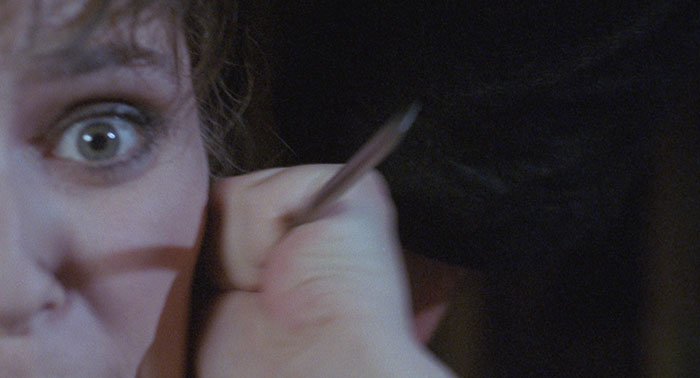 THE BLU-RAY DISC
StageFright arrives on Blu-ray from Blue Underground in a brilliant 1.85:1, 1080p transfer so rich in saturation as to bring Frank Tashlin to mind. It's sometimes preternaturally bright and glossy--wet-looking, almost. Therein lies the rub, as certain moments appear de-grained to a place that goes beyond the intended artificiality, I think, and into revisionism. Nighttime exteriors, which one would expect to spike with grain, occasionally have a Vaselined appearance. More often than not, though, the image really pops. The attendant 5.1 DTS-HD 5.1 MA track is even better. Just as Goblin was key to the success of Argento's best work, Simon Boswell's synth/electronica score for StageFright is, apart from Soavi's visuals and film-smarts, the movie's MVP, and it's given full breadth in a dynamic lossless presentation. A 2.0 option, presumably representative of the original Dolby Stereo mix, is on board as well, but it only made me miss the relative immersiveness of the remix. Although Blue Underground is usually pretty good about including original-language soundtracks, the audio here is English only.

"Theatre of Delirium" (19 mins., HD)--the title refers to "Deliria," as StageFright is known in Italy--interviews an affable and self-effacing Soavi in his native Italian. He speaks of his repeated good fortune on the production; what he doesn't discuss is his son's illness, which took him out of the directing game right when his career was hitting its stride. While the particulars are none of anyone's business, it bears mentioning that this guy was about to cash a very large check when he did the right thing and decided to be a father. "Head of the Company" (12 mins., HD) is an interview with actor Brandon, who recalls Soavi with a fondness I've seen often from people who've worked with him. "Blood on the Stage Floor" (14 mins., HD) visits with supporting player Gionvanni Lombardo Radice, who claims some authorship of the film I've never seen supported elsewhere, but, y'know, okay. The superior "The Owl Murders" (12 mins., HD) finds visual effects maestro Pietro Tenoglio in an intense humour, reflecting on his relationship with producer D'Amato and his chainsaw work and lighting. Lastly, "The Sound of Aquarius" (19 mins.) is perhaps the best of the bunch. Composer Boswell has a lot to say about Argento's support of his early career and somewhat less to say about this collaboration with Soavi--the subtext being that he understands that part of his task on StageFright was to emulate that Argento magic. A HiDef trailer for the film plus an extended poster/stills gallery round out the presentation. 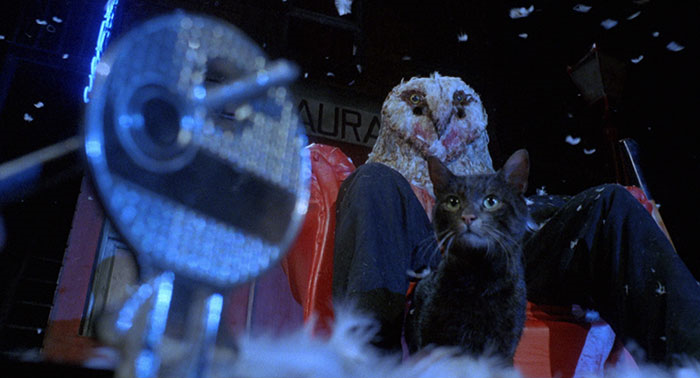