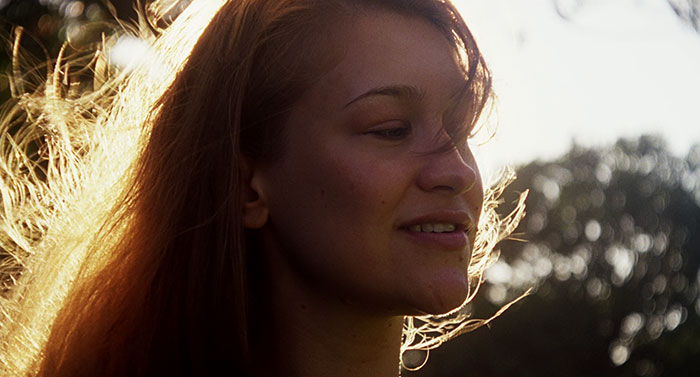 by Walter Chaw Paul Thomas Anderson's maybe-second, arguably third Thomas Pynchon adaptation after There Will Be Blood and The Master, Inherent Vice is the first official one, as well as the truest. It provides a Rosetta stone for Anderson's career to this point, Pynchon's work serving as a template for an artist crossing genres while holding true to a certain standard of intellectual rigor, a certain florid prosody, a specific interest in telling true the story of whatever the times may be. Inherent Vice also offers a framework for Anderson's intimidating film craft, his particular way of marrying image with sound, and the extraordinary shots--unbroken literally or rhythmically--that have made his movies as much pop poetry and music as narrative. Consider the reunion sequence in Punch-Drunk Love that finds Shelley Duvall singing Harry Nilsson on the soundtrack while Anderson rocks the camera like a baby in a cradle, or the wordless opening sequence of There Will Be Blood, with Jonny Greenwood's terrifying, Kubrick-ian Dawn of Man overture rattling the soundscape. Or the Gravity's Rainbow opening of The Master as our hero, on a boat, sways in another swaddle far above his madding crowd. Remarkable stuff. Cinema as high art, doing things that only cinema can do.

Compare to a sequence under the opening credits of Inherent Vice, scored to legendary Krautrock band Can's "Vitamin C," that's allowed to play through multiple edits and time-shifts, creating what functions essentially as an "unbroken" tracking shot that happens to be broken up repeatedly, joined together by beats and rattles. I've watched that sequence alone a dozen times: it starts on a boho side-street at night as a beautiful girl drives away in a car ("Watch your feet!") and a friend invites our hero on a late-night errand down an alley that ends somewhere over there at the ocean, then continues all the way through to the next day, when he arrives at the office he shares with a general practitioner. It's storytelling, mood-setting, without exposition. And it's gorgeous. Wise, too, about Pynchon's prose style in that it's at once insinuating and calling attention to itself: invisible and gaudy.

Inherent Vice has been widely characterized as Pynchon's "most accessible" book--mainly, I think, because it follows a traditional noir narrative more or less so that if you get lost, it's easier to fake it. The hard-boiled detective is "Doc" Sportello (Joaquin Phoenix), "hired" by his ex, Shasta (Katherine Waterston), to help her new lover, millionaire developer Wolfmann (Eric Roberts), whose wife may or may not be conspiring with her boyfriend to gaslight Wolfmann and make off with his fortune. It's convoluted, and Doc is the best worst detective in the Valley, not at all aided by a pretty serious pot habit, among other things. Doc is the direct descendent of the Philip Marlowe of Altman's The Long Goodbye: the quintessential '70s gumshoe who gains no profit from wisdom and is more representative anyway of a mood than of a true characterization. Phoenix, in other words, is extraordinary. His Doc shambles through a Summer of Love hangover freak-out. During what passes for interrogation for Doc, he scribbles "paranoid" on his pad--referring to himself, of course--after unearthing a coincidence that couldn't be a coincidence, man, far out. Inherent Vice is a period piece, sure, but it's also a film that understands Pynchon. It's possible to reassess There Will Be Blood as Anderson's swing at Mason & Dixon.

Doc follows his leads in a cloud of smoke and dream logic. The challenge of Inherent Vice is that it doesn't make literal sense. A moment in the middle has Doc attempting a coded conversation with (maybe) deep cover guy Coy (Owen Wilson) at a record release party that massage parlor hooker Jade (Hong Chau, stealing every scene she's in) confesses, urgently, is freaking her out. The conversation is a disaster. Then Doc's partner/buddy Denis (Jordan Christian Hearn) takes a photograph of Coy grabbing a bite in a tableau exactly like "The Last Supper"--or, closer to the point, like the Beggar's Banquet sequence in Buñuel's Viridiana. It's hilarious, as much of the film is hilarious, the product of extraordinary design and purpose that really only creates this post-modern web of referents and signifiers. It's meaningless out of context, and too meaningful within, and it becomes clear that the entire thrust of the film is to illustrate Doc's perspective. Either nothing means anything because it doesn't mean anything, or it means so much that it's impossible to unpack. Maybe it's both at once, and what better explanation for existence can there be than one of extreme contradictions held in uneasy tension?

Inherent Vice is about the horrible, unknowable banality/complexity of the world. It has things to say about causality, even down to the casting, with a dead-on Martin Short as the coked-out head of a criminal smuggling empire Doc somehow misconstrues to be a Chinese man. Even down to Eric Roberts, in a fascinating five-minute turn as the doomed Wolfmann: part Germanic bogeyman, part pathetic victim of a deep betrayal, part mythological figure. The lines blur. Then there's Sasha Pieterse as free-spirit/lost soul Japonica, doing her best Tara Reid circa The Big Lebowski--The Big Lebowski being another adaptation of a revered piece of hard-boiled fiction (The Big Sleep) that assumes the demented attitude of a pharmaceutical hallucination. Josh Brolin's Lt. Det. Christian "Bigfoot" Bjornsen emerges as another product of bogeyman/mythological figure: the stoic representative of law and order who, at one point, plays a mean trick on Doc by making him think Shasta's been found dead, while at another he's seen as henpecked and small as his wife (Delaina Mitchell) berates Doc for the shrink bills he's inspired.

All of Inherent Vice is an examination of the immediate aftermath of the '60s, which were, after all, only really 1968 and ‘69. It's about how there's no there there--no solution, no mystery, no heroes, no villains. It's shambolic even as it's meticulous. It is what it seeks to explain, itself the explanation of itself. It may be useful to go to another modernist for a hint about Doc; Wallace Stevens's " The Snowman" seems to capture him:

For the listener, who listens in the snow,
And, nothing himself, beholds
Nothing that is not there and the nothing that is

There's no truth, no substance. There are no nightmarish encounters in and out of various fogs literal and literary. There're no reunions, no moments where Doc feels comfortable enough without nervously checking for evidence that he's not having some kind of flashback; there's no evidence strong enough to stave off the need for some narcotic bulwark. By the end, we're as lost and blissed-out as Doc himself. Anderson's great accomplishment here is that he's created a work where there's no past, no future--there only is, man. Groovy. Originally published: December 14, 2014. 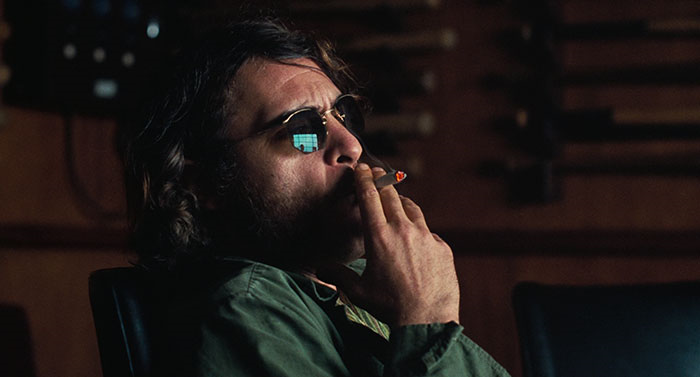 THE BLU-RAY DISC
by Bill Chambers On Blu-ray Disc, Inherent Vice gets the auteur treatment Warner previously bestowed upon Spike Jonze's Her, i.e., full-motion menus and a 1.85:1, 1080p transfer as opposed to the 1.78:1 crop the studio's non-'scope titles usually get. I would describe the image as aggressively filmic--grain, though it fluctuates, is in abundance from the opening shot, and there is even some unapologetic neg damage from 01:34:08 to 01:34:14, as you can see from the streaks in the blown-up frame below: 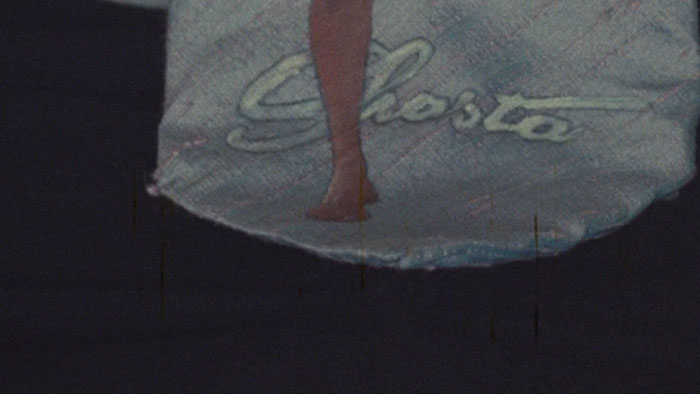 The milky contrasts and pastel grading complement both this cinematic texture and the aesthetic devices--long dissolves, lens flares, golden lighting--employed to transform the film into a period artifact. Deep black is scarce but greyscale has supple range. The attendant 5.1 DTS-HD MA track is comparatively state-of-the-art, with even the most mumbled dialogue being technically unimpeachable, although the movie's convoluted narrative arguably benefits from throwing the captions on, follow-the-bouncing-ball-style. I doubt the songs by Can and others have been so rich in bass since they were last performed live, and Jonny Greenwood's score tenderly exploits the discrete soundstage. Extras are, per Anderson's M.O., exasperatingly abstract: The cover copy refers to the bonus features as "special trailers," but one is just a deleted scene of Shasta and Doc watching the waves lap against the shore at dusk (their lips are moving, but a dreamy Greenwood composition mutes everything they say), while the fourth and final, "Everything in this Dream," is an artful 6-minute montage of cutting-room scraps, including a few shots of Doc and Sauncho watching a schooner leave port that could be construed as the ending from Inherent Vice the novel. DVD and Ultraviolet copies of the film are bundled with this BD release. 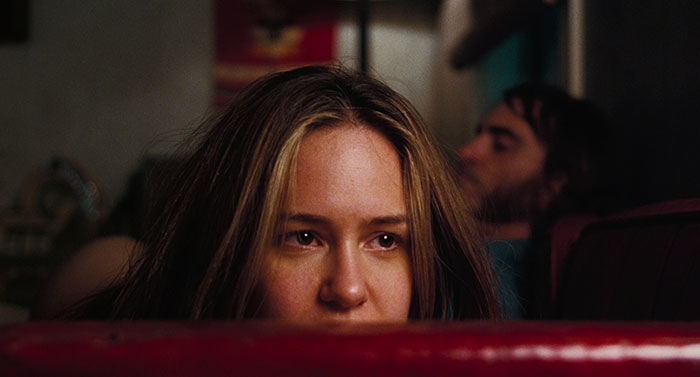