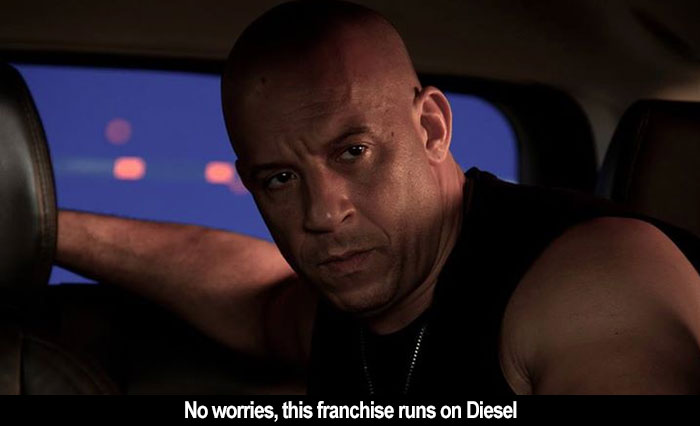 by Walter Chaw There's a death culture surrounding car enthusiasts. Whereas in football if a player dies their memorabilia tends to go dormant, in NASCAR, the sport's victims are elevated to sainted martyr: Their bits and pieces become as holy relics, sacrifices to thundering machine gods. Predictably, then, Furious 7 (hereafter F7) will enjoy a lavish critical and popular processional, as freshly-dead Paul Walker (the worst semi-successful American actor, living or deceased) haunts every frame with either his digital ghost or his patented expressionless reaction shots. Finished with a combination of camera trickery, CGI grafts, and Walker's brothers as ghoulish body-doubles, F7 if nothing else proves that Walker is distractingly lifeless in every scenario, but nobly so in this one.

In any case, Walker's death gives F7 the melodramatic pallor of a long-running "Telemundo" serial, humming along with its "I'm not dead, I just have amnesia" soap-opera moments and its graveyard conversations sporting as many edits and Dutch angles as Psycho's shower sequence. The men flex their oiled muscles, Michelle Rodriguez does her best to offset that weird thing where the movie's muscle cars only park in the middle of bikini car washes, and Jordana Brewster, looking alarmingly unhealthy, does her best to represent the promise of domestication for Walker's wild mustang Brian. Brian signs on for one last ride with the gang (I'm presuming you've seen the other films, by the way--I can't honestly remember if I have) led by booming basset hound Dom (Vin Diesel), with key assists this time around from weathered CIA spook Mr. Nobody (Kurt Russell), who's helping them track down evil ex-British Special Services guy Deckard Shaw (I'll give you one guess). Seems Deckard wants to retire the Scoobies because of something they did to his brother, leading to that scene where a bunch of the good guys drop out of a cargo plane in their cars, the better to parachute into Azerbaijan.

Milk and honey for long-time fanatics of the franchise, without any larger message than "family, man," F7 doesn't offer much for the uninitiated. It's not that it's hard to follow, it's that there's nothing to follow. Despite twelve hours of missing backstory, all you need know is that one has a family, one is a girl with a cracked nut, and the rest are meatheads but the black ones are funny. Riding this idea that the franchise has an elevated sensitivity to multicultural diversity, I'd counter that it just has more diversity--not an elevated sensitivity. Such is the state of things that this represents progress. If only the filmmakers could resist having a quartet of gold body-painted girls wriggling suggestively at a party in Abu Dhabi (with one of our heroes (Tyrese Gibson, I think) humiliating a partygoer for "smuggling missiles" in her barely-there dress), then we'd be getting somewhere. As it is, what the film offers is a series of big set-pieces that sub cars for things that people do in regular action movies. Remember that great scene on the Burj Khalifa with Tom Cruise in Mission: Impossible - Ghost Protocol? Here's that scene with a million-dollar sportscar that looks like a shiny red insect Dom twice dubs "The Beast." It's sort of like Shrek, except instead of Shreks doing stuff from other movies: hot rods.

F7 represents the perfect critic-proof product. It's not good, but it's comfortably facile. It's not "Days of Our Lives" from the '80s, but it's "Days of Our Lives." It has a lot of brown faces in traditionally white-face roles, which reminds me of those old Hong Kong flicks where white people are treated with the same derision and bigotry as Chinese people are in U.S. cinema. It's the worst kind of playing-field levelling, but there you have it. The picture has huge stunts, a mano a mano battle with metal pipes on top of a parking garage, and a sequence where Tyrese gets to play Mr. T's afraid-to-fly shtick from the "The A-Team". What I gather from people who remember seeing all of these movies is that this is an emotional send-off for a beloved cast member in a beloved series--a little like Star Trek II: The Wrath of Khan. I gather, too, that what makes these films so great is how they steadily escalated their absurdity so that they began to emulate John Woo's and Ringo Lam's "heroic bloodshed" sequence from late-'80s Hong Kong. What I saw, though, is a largely-bloodless, consequence-free perpetual-motion machine that poses no peril to its heroes no matter the calamity, yet still seeks to mine pathos from the real-life mayhem-caused death of one of its principals. In other words, I liked the Azerbaijan sequence. The cars were cool, too.