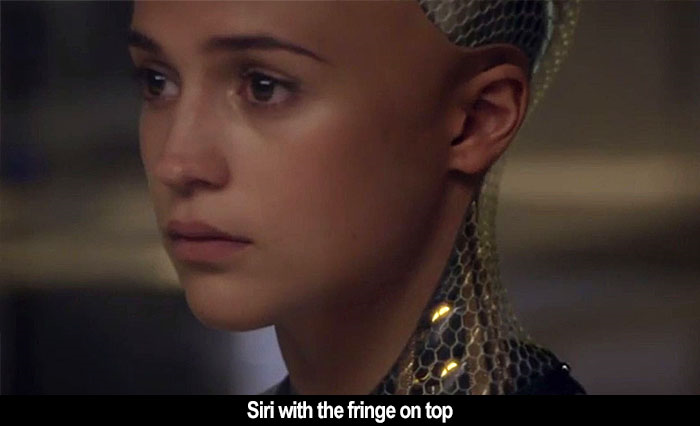 by Angelo Muredda Say this much for Alex Garland: there's an early stretch in Ex Machina, his auspicious directorial debut, where one wonders if one is seeing something relatively new. That's meant not as a backhanded compliment but as an acknowledgement that good sci-fi is hard to come by, and that impressive world-building rarely segues into sophisticated storytelling grounded in novel ideas. For probably long enough to give it a decent shelf-life, Ex Machina passes the genre sniff test about as well as its android heroine--an artificially intelligent being with the body of a European rising star--clears her own trial, a personal variation on the Turing test. If the film dips from there into a familiar, smart-alecky noir about bad men and the women they can't control, at least credit it for deferring the inevitable.

Our audience surrogate is low-level programmer Caleb (Domhnall Gleeson), a dopey, prudish sort plucked from the obscurity of his cubicle to spend a week at the tech-forward, remote mountain retreat of his Zuckerbergian boss, Nathan (Oscar Isaac), a search-engine guru on the verge of a major breakthrough. What at first looks like a guys' week in the hills turns out to be an experiment with thicker non-disclosure agreements than the respective stars' The Force Awakens contracts. Caleb, it seems, has been hand-picked to chair sessions with Nathan's newest bauble, a synthetic flesh-and-gear humanoid A.I. program named Ava, sveltely embodied by Alicia Vikander. Caleb's task: to determine whether Ava can sufficiently pass as human over the course of several sit-down interviews monitored by her creator. That goes smoothly enough, until the docile subject takes advantage of a power and CCTV cut-out to confide in Caleb her plans to escape their mutual boss's weird playland.

As a screenwriter, Garland has been behind some of the more distinctive minimalist genre efforts of the past few decades, including 28 Days Later... and Never Let Me Go. He does a nice job of parlaying that experience into his own understated design aesthetic as a director. In its emphasis on smooth synthetic textures, Nathan's tech palace resembles elements of Jonathan Glazer's Under the Skin while retaining something of its own frosty character. You can buy that the gentle whirs of Ava's head tilts and the light whooshes of the complex's glass doors are Nathan's own delicate flourishes rather than strictly being Garland's, in part thanks to an inspired, unsettled performance by Isaac, who plays Nathan as the kind of handsome bro who knows he can get away with sporting ugly, '90s-derived wire frames. Between his gregarious back pats and distant stare, his disco and classical aesthetic, Nathan is inconsistent in his broad strokes, but Isaac turns those schisms into an asset, suggesting a rich recluse who doesn't have a solid character because he's never had to form one. We don't really know what he's after with Caleb, which grants a nice charge to their early moments together, especially their tentative sparring matches about their respective desires.

Nathan's inscrutability makes him a good villain for a slow-burning three-hander like this, but Garland doesn't have as much luck with his other leads. As the film goes on, Caleb's growing personal attachment to an illusory woman seemingly fashioned out of his dreams is pitched as an exposé of the possessiveness and objectification behind nice-guy benignity--a neat trick, though one with very little payoff. There's something to that critique, to be sure, and Garland scores a few meta points in taking this stock protagonist down a peg. Yet his acknowledgement that male-dominated sci-fi is a bastion of white knights who can't ever truly get into the heads of the women they're after isn't necessarily a trenchant critique in itself so much as an easy point-scoring mea culpa, and Gleeson struggles, as anyone might, with playing a thesis. Vikander, meanwhile, is hamstrung by having to embody a character whose subjectivity is a third-act reveal rather than something organically grown into. Put another way, we aren't allowed to know Ava because the men in her life don't; until suddenly they do.

Much will be said about the gender mechanics Garland is playing with here and the way in which he implicates his presumably largely male audience for indulging in a genre that has long relegated women to secondary roles as sexual objects, good only insofar as they can be acted upon. To his credit, Garland's flirtation with questions about how even humans, let alone seductive androids, are sexually programmed by the normative systems around them, feels earnest. But this moderately progressive noodle-scratching is never as radical or original as the film seems to think it is, and its build-up to a literal retelling of the Bluebeard myth it had only teased earlier is too self-satisfied and smug to have the impact Garland obviously intends. Ex Machina doesn't quite pay off, then, but it's more or less worth the trip to the mountains.