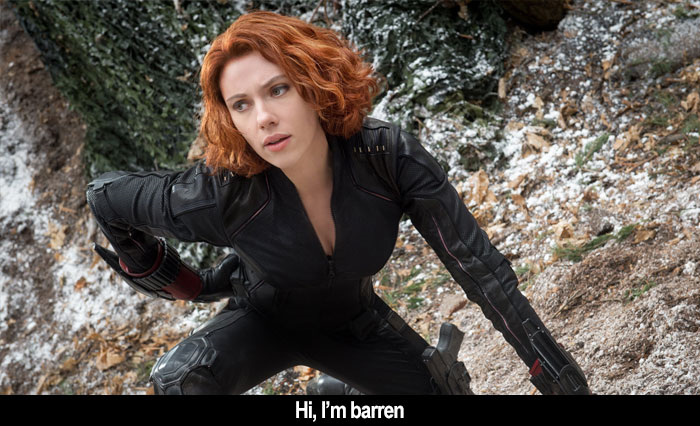 by Walter Chaw It's pointless to recap this edition of the Marvel Cinematic Universe's endless cycling through decades of storylines, melodramas, loves and blood feuds, deaths and resurrections--this Möbius strip of punching and quipping and punching and quipping and punching and... It's an ouroborosian worm devouring itself into eternity, if you let it, and the sanction that a few billion dollars confers suggests it'll keep devouring itself for a while longer. Still, it's a cripplingly expensive endeavour, meaning that surprise and individuality are crushed in its logarithmic march towards solvency--and the human collateral caught in its gears is the tragedy that the place we get to see Mark Ruffalo and Scarlett Johansson (the two best, most interesting actors in the United States right now) share an emotionally complex scene is in this vacuous light show-cum-cash register, Avengers: Age of Ultron (hereafter Avengers II). You could say that at least it happened--you could also say that you wish it had happened in a vehicle that actually cared about them, and it wouldn't be too much to ask.

There are things to like, in other words. Such as how Captain America (Chris Evans) is a genuinely good person whose nightmare of a dire possible outcome breeds in him not melancholy so much as resolve and purpose. It's the story of Christ's temptation told on this grand, mythic canvas. It's wholly appropriate and certainly understands scripture better than the people who didn't think Noah was true to the source. (Noah's faith was terrifying.) Heartening, really, in this age where Superman doesn't seem to give much of a shit about people, that these Avengers spend a good hunk of this film doing their best to save every single inhabitant of a floating city. Even snarky Tony Stark (Robert Downey Jr.)--who observes in the film's best moment of self-knowledge that it's all getting as long as a Eugene O'Neill ("Long Day's Journey Into Night"--I know, I know, but it works better than intended)--scans to see if there are inhabitants in a building before smashing through it with his buddy Hulk (Ruffalo). I have to think this obsessive, specific humanism is in response in part to the disappointed horror levelled against Man of Steel--it's too meticulous, too flagrant, to be accidental. There are even extended sequences set on Hawkeye's (Jeremy Renner) farmstead that show the toll on his long-suffering wife (Linda Cardellini), who, carrying their third child, waits for him in perpetually noble selflessness ("I support your avenging, I really do"). It's what passes for character development.

But put this American Gothic up against Black Widow's (Johansson) backstory, in which she endures forced sterilization. When Marvel tortures/experiments upon Wolverine in traumatic flashbacks, he emerges with adamantium claws and skeleton. When Marvel tortures this woman, it's to tie her tubes. One is an empowerment fantasy with elements of animism; the other is a ban on female sexuality, which is, after all, an actual superpower. It's been done to her, you see, so that this woman assassin will never be distracted with having children. Yet what about Hawkeye, who has three kids and heroes just fine? It's easy to dismiss Black Widow's sterilization as something the evil Russians do (ballet is part of their assassin training because Bolshoi, amiright?), but then Avengers II tacitly agrees in the dismissal of all female characters save the sterile one--the one who "aggressively flirts," who tells her would-be boyfriend (Ruffalo's Dr. Bruce Banner, alter ego of the Hulk) that she would like for him to be "hard on her." The one, as it happens, who wonders whether she's unworthy of love because she can't have babies. At least she can't threaten her team with her reproductive capacity--which is probably why all boys dream of superpowers in the first place. Prometheus is mentioned prominently in the script, I think by Stark again, or maybe Banner; anyway, one of the smart ones does it. And when you mention Prometheus, you're talking about Frankenstein (which this movie is sort of about), and Frankenstein, a book written by a woman (the daughter of the prototypical feminist essayist, no less), is mostly about the abomination of male reproduction.

Consider that Marvel heroines like Pepper Potts--who took over the biggest corporation in the world in superior instalments in the MCU--or scientist Jane Foster--who, it's mentioned, is in the process of maybe winning a Nobel Prize--are relegated to one dialogue scene between boasting men, comparing prized possessions over a stein of beer. It's not sweet, it's handsome monkeys beating their chests. There's nothing for the girls to do, see. The main function for Black Widow here is to turn Banner into the Hulk and then to turn Hulk into Banner again once the Hulk has outlived his usefulness. She does this by touching his hand, staring into his eyes, cooing, soothing. They call it the "lullaby," though it has deep sexual/mother connotations that are disturbing, given that the entire fantasy of Johansson in this role is something conjured by fanboy contingents that have done little to distinguish themselves in coming to mindless, sheeplike defense of these golden calves of their longing. She is the perfect mate; it makes sense, suddenly, why Johansson did Her (and did it magnificently)--a role without face and body in which she first becomes the idealized mate, then transcends. Avengers II can never allow her transcendence, but it can give her a scene in which, astride a motorcycle in her best Girl with a Dragon Tattoo pose (speaking of male fantasies of female sexual superheroism), she mutters that she's "always picking up after you boys." Oh, and it can give her a hysterectomy.

Look, when I was six-years-old, I stayed up in my footie jammies, all a-quiver, waiting for "The Challenge" to air on Channel 4, our local NBC affiliate. I was excited. You are never as excited for anything again the way you're excited when you're six. If you don't know what "The Challenge" is, it's half of a Hanna-Barbera-produced live-action superhero special featuring not only Adam West and Burt Ward reprising their Batman and Robin, but also The Flash and Hawkman and Captain Marvel. I couldn't think of anything I wanted to see more than a live-action superhero show. The Spidey sequences on "The Electric Company" were my favourite. I'd watch the whole episode waiting for them. I loved Sam Raimi's Spider-Man trilogy and Chris Nolan's Dark Knight cycle. I deeply, hopelessly revere Tim Burton's Batman Returns. I collected comics for thirty years. "Archie" #278 was the first thing I bought with my own money. 35 cents. And my complaint against Avengers II isn't that it's unfaithful (it is, but only slightly--I mean, Ant-Man created Ultron, but we can't introduce Ant-Man before this summer's Ant-Man, can we?), or that it's a misogynistic sausagefest. Because, you know, on the scale of not-surprising things, that ranks right up there with the "Duck Dynasty" guy saying he doesn't like homosexuals. No, my complaint against Avengers II is that the action is hard--sometimes impossible--to follow, and that the most interesting things about comics, that frisson of recognition sometimes that peril or heartbreak can happen, is absent.

Which is not to say that returning writer-director Joss Whedon doesn't know that or doesn't try to talk about how the only thing that can fell these immortals is their own petty insecurities and massive hubris. Why else introduce Scarlet Witch (Elizabeth Olsen, the real reason I was enthusiastic for this film) to force each member of the hero team to hallucinate their worst fears? While I respect the attempt, there's no there there, not when Captain America: The Winter Soldier does it so beautifully--not when Bryan Singer's superhero pieces address poetically (yes, poetically) the loneliness and responsibility and essential alienness of his heroes. Singer, a deeply flawed, maybe even bad person, is working out something personal in his movies and you can feel it. He outed Iceman all the way back in X2, remember. When a snarling German baddie in Avengers II refers to our god-avatars as "circus freaks," it's impossible not to think what Singer would have done with that idea.

The charade implodes when the picture arrives at a party scene where the boys get GQ'd up and hang out with their one black friend and some Asian doctor chick (Claudia Kim) who efficiently fulfills the tropes of both smart Asian and sexy Asian. A threefer if ever there was one when she also becomes a maiden-in-peril--but not before she side-eyes a "Will...Thor be there?" question to raucous, knowing laughter. In the middle of this sop to the middlebrow nerd-class, Ocean's Twelve suddenly breaks out. Nerds, beware: at some point your objects of idolization become commodified and you'll find that they're the ones stuffing you in lockers now. What's scariest about this franchise is how much it's starting to act like a Michael Bay movie. It's not there yet, but you can see it happening. It's the first third of Christine--Arnie ditching the glasses. It's another kind of Frankenstein's monster created by the hipster generation. Frankenstein kills his dad in a frigid murder/suicide. The Marvel Cinematic Universe will eventually do the same thing to itself and its twin-daddys: nerd culture and nostalgia.

Avengers II is bad because it has epileptic action and lots of it: Hulk vs. Iron Man; Avengers vs. Germans; Thor vs. a hot spring; Hawkeye and Scarlet Witch vs. robots; Vision (Paul Bettany) vs...oh yeah, Ultron. Ultron (James Spader) is an A.I. who does the unthinkable by displaying artificial intelligence. The film is essentially the stupid version of Alex Garland's fantastic Ex Machina: It deals with the same issues of gender and sexuality, but stupidly; the same issues of the ethics and wisdom of manufacturing sentience, but stupidly; the same issues surrounding the responsibility of absolute power and the fatal redundancy of immortality, but stupidly. It's big and incomprehensible for large swaths--then everyone comes up for air to punch at the sky and moan about poor choices and their alleged frailty. Ultron is Stark's Frankenstein's monster. Ultron creates his own Frankenstein's monster in Vision (Bettany), an android who's really a cyborg because he's got biological elements, right? My nerd is showing. Anyway, Vision acts like Christ, too, but not before he fast-forwards through Lacan's development phases, has a few meaningful-esque dialogues with his "father," and eventually stops hoping Russell Crowe will stop the shit and make more Master and Commander flicks.

There's a scene that says it all where Black Widow stands by herself in a giant room, looking at a wall: it's meant to be contemplative, but comes across as autocritical. There's so much to see that there's nothing to see; just give me a minute, here. Its ultimate message appears to be that A.I. is bad unless it's good. It's like Raiders of the Lost Ark in that sense, in that a weapon of mass destruction doesn't exist if you don't look at it. Except that Spielberg knows his way around an action scene and Whedon...doesn't. Call me crazy, but I don't think the writer of "Hush" and "The Body" was hired for his elegant fight choreography and CGI chops. It's unfortunate, because about 75% of the film is antic motion, leaving the rest to moping about and long narrative explanations and setting up the rest of Marvel's twenty-year plan to outwear its welcome. Though I'm no sage, I'd say that if they continue to distance themselves from smart, original voices in favour of those that can be molded and neutered, that day will come a bit sooner than expected. They'll still make their money, but they'll lose the thread. Can I get an "amen," George Lucas?