You Might Even Say They Glow...: FFC Interviews Alan Rudolph & Michael Henry Wilson 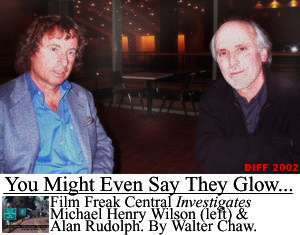 October 21, 2002|I don't know exactly what I was expecting from Alan Rudolph, the director of such peculiar films as Love at Large, Trouble in Mind, and the frankly misguided Vonnegut adaptation Breakfast of Champions, but a smallish, balding, unassuming man with a flat west-coast accent wasn't it. (This despite his cameo in The Player pitching "a cross between Ghost and Manchurian Candidate.") In Denver for the city's 25th International Film Festival with his latest, Investigating Sex, in tow, Mr. Rudolph--along with the film's co-screenwriter, Michael Henry Wilson--sat down with me underneath the canopy dome of the Denver Performing Arts Complex, high above the bustle below of the crowd arriving at the Temple Buell theatre for the screening and reception to follow. (A privileged vantage reminiscent of the ivory tower interplay of his collection of intellectuals in the picture.) I began by asking Mr. Rudolph about his long association with friend and mentor Robert Altman.

ALAN RUDOLPH: Well, it started at zero and went to infinity. I was an assistant director and so I stopped being one and became a first assistant director before starting to make my own little films long about 1971. I got the call that they wanted me to be an assistant on an Altman film and I said, "No, I don't do that anymore," and they said to go and see his new film opening that night, McCabe and Mrs. Miller. That was Friday and I came in Monday and said, "Yes, I'll do anything you want me to do," and they tested me, I guess. They said, "Would you work as a second?" and I said, "Well, I haven't done that for five years, but yeah, I'll do anything you want me to do." And with Bob, all the lines blur--there are no real functions: if you're good at this and that you can do both and it's the best thing that ever happened.

FILM FREAK CENTRAL: What do you bring to your work from Altman?
AR: Any major influence that is profound in your life whether professional or emotional--you never really can define it. I would be different if I hadn't worked with Altman, but one of the things that I recognized when I worked with him on The Long Goodbye, which was the first thing I did as an assistant director for him, was all of the things, unformed dreams, desires, fuzziness that I was trying to find out there to connect--he did. Only he goes from A to Z the way most go from A to B. I suppose in interview terms I would say "the treatment of actors" as the key thing I brought to my work from Bob--the way to communicate, to strip away all of the unnecessary stuff and get to the heart of the thing. He makes you aware of good surprises, which is the number one thing that you want to be aware of.

Your work seems very different from his, though.
AR: Yes, we're totally different. He works from the outside in and I work from the details out. The truth is that I'm just privileged to be in the same sentence--it's been the best education of my life and it continues. I recognized from the beginning that we were in the presence of a master at a time when people weren't aware of such things--we were trying to define it but America wasn't aware of such distinctions there just at the end of the studio era. All of my instincts with Bob began to gel--he showed me how I could take my instinct and bring it to life.

What happened to Made in Heaven?
AR: We'd finished that film--it was a studio film, Lorimar, that started and went out of business during the course of that film. I did that film because I understood that I could do what I want and Tim [Hutton] and I were partners on it. My first cut I remember inviting Keith Carradine to a screening, the only screening as it turns out, and he said to me, "Hey, this is maybe your best work." And I knew the end of it, the last ten minutes, was as good as anything that I'd done to that point. What came out was nobody's vision--it was a studio that had changed hands three or four times and what remained was bowdlerized beyond recognition.

Is the footage in your possession? Are you able to reconstruct it?
AR: I wouldn't know how to even go about that. I don't know if it'd make any difference to anybody but me, besides. But it did have a... I just remember that I said, "Look, if you want this film to be schmaltzy, we have to add something to balance the taste," and we did--like the Ellen Barkin devil character wasn't in the script at all, and Tim was fantastic in this piece. We had a darkness to it.

Tell me more about the ending of your cut.
AR: It was really interesting, it ended in the most unusual, wonderful way. It was a struggle between Debra Winger as some God surrogate figure and Barkin over Tim after he'd been hit by a car and it was the best shot I'd ever done in my life. We shot it in Atlanta as the sun was going down and it was this huge traffic scene and then you close in, he gets hit, and you pull back and nobody's there--all in one shot--and oh it was fantastic, but it's all gone.

Did that make you leery going back to a studio with Mortal Thoughts and Songwriter?
AR: I never did--Mortal Thoughts wasn't really a studio film, it had a budget of six million dollars, and Songwriter, a movie I liked actually, was made for what at the time was a fledgling studio, Tri-Star, but I didn't know it at the time. I had nothing to do with the origins of that script--but I haven't worked for them anymore. After Made in Heaven I realized...

You've often spoken of an adaptation of Gary Larson's "The Far Side" comic one-panel.
AR: Oh, I almost got that made. David Putnam almost made that at Columbia for the half-hour that he was there. (laughs) Now you'd probably do it totally different, but at the time we'd done the test and it was really funny. It looked just like the cartoon--Gary is a friend and I just took his three or four hundred panels and had some kind of story about the struggle for reality by humans and anything not human. So spiders had as big a part as the two goofy people with the hair, y'know.

Let's discuss Investigating Sex.
Michael Henry Wilson: Investigating Sex started with Wallace Shawn sending me the English translation of the book on which the film is based (Jose Pierre's Recherches Sur la sexualite archives du surealisme. -Ed.), which is a collection of transcripts from the surrealist discussions of the late twenties and Shawn at the time, I think, was thinking of doing a play?
AR: No, I was going to do a picture on Man Ray and the book was literally all transcripts.
MHW: Yes, it's twelve sessions presided over by Andre Breton, the pope of the movement, and Dali showed up, Buñuel, etc. And Breton encouraged them to analyze their sexuality in the most clinical terms possible and basically edited those musings. Only two were published at the time, but the rest were eventually found and published.
AR: It's a ridiculous thing to make into a movie (laughs), but my first thought was, Who transcribed it? So we had a story of their hiring of two female stenographers, we moved the story to America to avoid the "that doesn't look like Breton" thing, and added a few characters and had a lot of fun.

Does it retain the dialogue from the transcripts?
MHW: A little. I think there's a lot more humour if only because in an American context the characters are a lot more repressed and puritanical--embarrassed--by the subject than pure Parisian intellectuals.

And The Secret Lives of Dentists?
AR: That was just finished. It was sent to me by Campbell Scott, who is the star and one of the producers--he has another film here, Roger Dodger, and he's great in that film, and in my film, and in Mrs. Parker and the Vicious Circle, which is my film where we met. He's maybe the best unknown, underrated actor of his generation. Was Dylan Kidd here?

No.
AR: He's amazing--the screenplay and the shot-selection.

Like Cassavetes.
AR: Exactly right. Dentists was written by playwright Craig Lucas from a Jane Smiley novella--it was a dream experience. I suppose that they have a lot in common, but I'm not sure what that would be--one thing is that both of them you have to allow the story to unfold--there's no element of violence. Dentists is emotionally devastating while Investigating Sex, you realize it's all an affectation.
MHW: It's what the two female characters experience--they go to the end of it not bound by the intellect as the surrealism itself.
AR: It's got a tangled past that I think we've finally rescued it from, but I should say that it's more Oscar Wilde than wet-and-wild.

Can you talk about that tangled past?
AR: Well, it was made in Germany, subbing as Cambridge, MA, which works fine because most of the film is set in this big house. Nick Nolte and his partner found two other financial partners and raised the money to shoot very quickly in Germany. It took this German game show company and put them on the map, getting them one of these government grants which is really just what they were after. They changed the rules of the game afterwards, though, and decided that if it was a sex movie they could sell it, so they turned on it and when I wouldn't make any changes, they abandoned it. I think we've finally gotten the film back--we showed it undercover to the Seattle film festival closing night and it was well received. FILM COMMENT chose it as one of the best unreleased films--and it's been gratifying.

That must have been a frustrating experience.
AR: I haven't gone through anything like this on any film. I've had films that were marginally released, but never anything like this before. But I think that the worst might be over now.