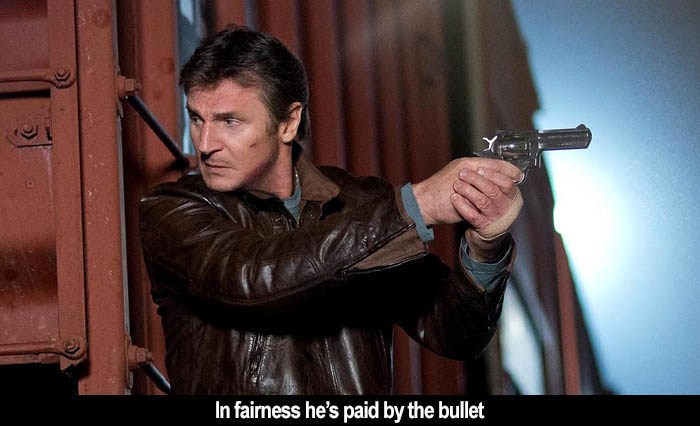 by Walter Chaw Jaume Collet-Serra's Run All Night fulfills every requirement of the Liam Neeson subgenre of elder-vengeance while simultaneously completing the Grumpy Old Men trilogy in an unexpected way. It's a hollow stylistic exercise that mainly exposes how good We Own the Night was, and while some slight comparisons have been to Phil Joanou's underestimated State of Grace, really the only thing Run All Night resembles is everything else Neeson has decided will be his legacy since the first Taken movie about seven years ago. What's most painful, I think, is how consistently great Neeson is at doing this one thing over and over again. He makes it hard, in other words, to stop wishing he'd go back to doing something worthy of him.

In this iteration of the endless parade, Neeson plays Jimmy, an ex mob enforcer deep in his cups who's pulled out of his guilt-addled retirement to murder little asshole Danny (Boyd Holbrook) before Danny can murder Jimmy's son, Michael (Joel Kinnaman). Just before, as it happens, pointing to one innovation Run All Night manages: Despite there being a pregnant woman (poor Genesis Rodriguez, off to a humiliating start between this and Kevin Smith's Tusk) in the narrative, the maiden in constant need of last-minute rescue is Michael. Danny, alas, is the son of ex mob-boss (or current mob boss, I don't know) Shawn (State of Grace's own Ed Harris), who, in his grief, decides that he will kill Michael and then kill Jimmy, too. Why? A long, impassioned speech about emptiness and eyeholes and stuff is why.

Monologues like these are all the explanation one needs for why someone like Harris agreed to be in the film--and if we're being honest, he really is fantastic here. During the obligatory Heat scene, Harris and Neeson practically put on a clinic. Run All Night is about watching two great actors spend themselves on empty vehicles. Perhaps recognizing its essential meaninglessness, Collet-Serra bloats the movie with countless cutaways to baby pictures, suggesting...what? Lost youth? Experience's toll on innocence? Sins of the father? All of that and none of that. Run All Night is one thing, then the next, then the next, and then it's over. The movie's trailer, with its mournful "Danny Boy" cover, could be the trailer for anything; the helicopter establishing shots of nighttime cityscapes could be from anything.

Run All Night isn't boring, exactly, and it's not exactly bad, either. It's like an old pair of sneakers you're so comfortable with you don't remember putting them on and are in no real hurry to take off. It's rote. It appears to be rote for Neeson at this point as well. He is, by nature, something of a tragic figure, and it doesn't seem like an accident that he keeps taking roles that involve the loss and/or defense of a family member, but the films begin to blur and the impact begins to dull. Coming so soon after A Walk Among the Tombstones and Taken 3, it's hard to distinguish which broken-down man with a particular set of skills this is, and which great evil he's rectifying this time around. If you're asking, there's a car chase that isn't great, a subway thing that also isn't that great, a thing in a tenement that plays a little like a creaky Attack the Block (but certainly not like the Raid flicks), and a Bodyguard climax with a black terminator for some reason at a lakefront property for some reason. There's one wonderful death scene, another not-so-great one (stupid, in fact), and the last shot is of a poignant photograph. Yeah, it's that kind of movie.