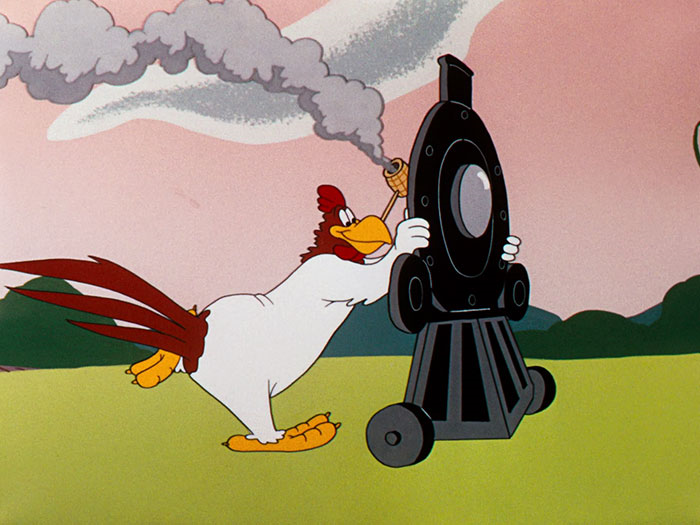 by Bill Chambers Inexplicable, tone-deaf Looney Tunes pairings are legion in post-Termite Terrace revivals of the brand, but rare is the Golden Age head-scratcher quite like The High and the Flighty, an otherwise pro forma Foghorn Leghorn cartoon guest starring...Daffy Duck? Introduced joyfully bouncing a ball towards a mysterious "rope limit" that turns out to be the reach of the leash holding Barnyard Dog in check, Foghorn starts another war with his canine nemesis that travelling salesman Daffy Duck espies and decides to capitalize on by selling both parties his wares from the Ace Novelty Company, double agent-style. Once Foghorn and Barnyard realize that Daffy's exploited their conflict to line his pockets, they turn the tables on him. It's really that simple. There's a reason Daffy works for Ace and not Acme--because his products work, more or less; that's something, I guess, and as usual Foghorn Leghorn, thanks to Mel Blanc and writer Tedd Pierce, is immanently quotable ("We have been flimflammed!"), though his relative size is even more all-over-the-place than usual. But Daffy Duck is an insuperably odd presence here, with Pierce and director Robert McKimson seemingly recognizing Daffy's inherent dissonance in this milieu by casting him in a generic huckster role that suppresses his persona--they've only tailor-fitted the comeuppance gag for him, which consequently feels mean-spirited--yet cannot eclipse his iconic baggage. Punning the name of John Wayne's proto-Airport sudser The High and the Mighty, the title doesn't make much sense, either. Available on: Looney Tunes: Platinum Collection, Vol. 2 [Blu-ray]