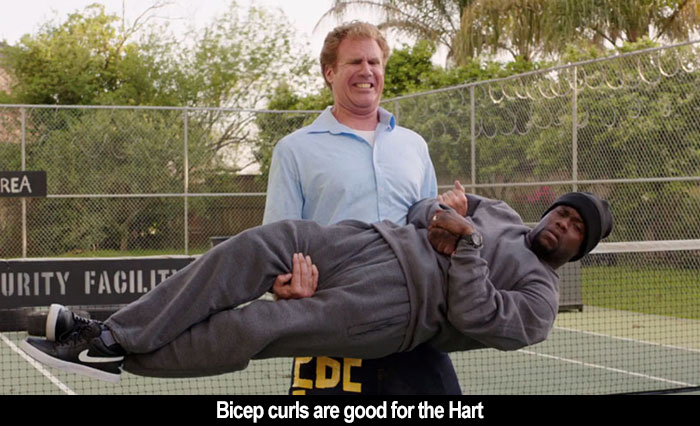 by Walter Chaw The title pretty much says it all, as screenwriter Etan Cohen's gay-panic directorial debut Get Hard works as the exact antidote to his own work on the smart, occasionally vital Tropic Thunder. It's puerile and indelicate--that much to be expected, I suppose, but it's laboured, too, and flat as a pancake. If Get Hard were a middle-aged man, you'd be calling an ambulance for all the wheezing. Two scenes: in the first, Wall Street wolf James King (Will Ferrell) does a patented Will Ferrell freak-out, mistaking attendant Darnell (Kevin Hart) for a carjacker, ending with Darnell saying, "I didn't mean to freak you out, man;" in the second, two scary-looking Boyz N the Hood-era gangbangers say, "Wall Street is where the real criminals at!" The former demonstrates how poorly-matched are the improvisational styles of the leads, with Ferrell needing a deadpan straight world to his shenanigans; one wonders at the wisdom of casting two alpha-comedians in a film--with no one setting up the jokes, there's never anything to pay off. (It's why Jeff Daniels is Jim Carrey's counterpart in the Dumb and Dumber movies and not Robin Williams.) The latter demonstrates how desperate the film is in trying to be smart and relevant. What could be more sophisticated and racially sensitive, after all, than a screenplay written by a bunch of identical-looking white guys imagining a Los Angeles street gang called the Crenshaw Kings transitioning their drive-by and street-smart jive business into day-trading?

The one tiny saving grace of Get Hard is a brief cameo by John Mayer that correctly identifies him as a smarmy asshole. The rest of it involves James getting busted by the FBI and, in the month before his highly-unlikely incarceration in San Quentin, hiring milquetoast "Cosby sweater-wearing pussy" Darnell to teach him how to "get hard" in order to survive prison life. Part of this process is transforming James's mansion into a mini-prison, the symbolism of which is either lost or loathsome, you be the judge. A better joke would've been James going through all of this only to find himself sent to a low-security resort facility for a few weeks while Darnell and his wife struggle to survive on two meagre incomes, dooming their adorable moppet to undereducation, humiliation, and disillusionment. The actual solution, with Darnell given a little pat on the head and his own car-wash business, smacks of "The Jeffersons" appeasement. Then there's the part where James dresses like Lil Wayne, the better to fit in with the blacks, and earns himself a girlfriend, Shonda (Dominique Perry), whom James will describe as a "ho" and whose primary function is to do that aggressive booty-shaking thing, because it's satire, don't you get it? It's a satire in the same way as having James's mentor Martin (Craig T. Nelson) claim a bootstrap success story on the back of an $8M loan from his father; the same way as having the only Hispanic characters in the film be servants and landscapers who relish their masters' downfall. It's all of it obvious or ugly or both.

Get Hard is about racial sensitivity as practiced patronizingly by the Fortune 500. It's the Starbucks "Race Together" campaign, offering the false equivalence of any conversation being good conversation and paternalistically positing that Frasier Crane's "I'm listening" is just the ticket to putting this race issue to bed. It peddles in the broadest, easiest catchphrases of the "I'm not racist" white-person narrative--curries favour by showing privileged white people as Trading Places-era buffoons, then ties everything up in an action conclusion on a boat that reminds mainly that the last word on this was delivered, lethally and masterfully, by "Arrested Development". Perhaps sensing its failure as a race comedy, Get Hard also does its best to mine laughs from homophobia and the threat of prison rape, which has the abominable side-effect of essentially conflating the two. A scene at a gay restaurant (?), where James does his best to force himself to fellate someone in the bathroom, doesn't come off as funny so much as like that gay roommate I had in college who couldn't stop talking about how disgusting he thought vaginas were. Kevin Hart is the new Chris Tucker, Will Ferrell is the old Will Ferrell, and Get Hard says more about how hilariously intractable are this country's racial issues by the fact of it than by its flaccid content and execution. It would be troubling if it weren't so obviously doomed to inconsequence. Actually, that there's nothing useful or surprising to be gleaned from the feckless manufacture of this piece of shit might be the most troubling thing of all.