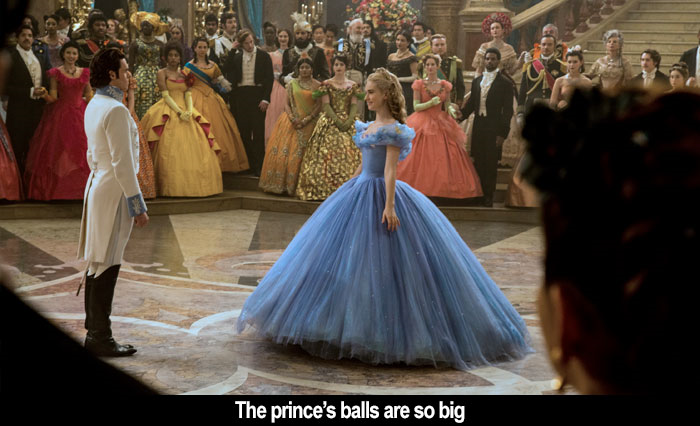 by Walter Chaw Notable in however these things are notable for not being an Ever After revisionist Cinderella but rather a fairly straightforward adaptation of the Disney animated version, Kenneth Branagh's Cinderella would be interesting to look at next to Kenneth Branagh's Mary Shelley's Frankenstein, if only to see how Helena Bonham Carter morphs from immortal beloved to Fairy Godmother. (Answer? Awkwardly.) It's not a bad conversation to have, actually, in a film that finds a great deal of depth in Cate Blanchett's Barbara Stanwyck take on Lady Tremaine, the evil stepmother. In a nicely-played scene, she stops just short of confessing that the reason she resents Cinderella (Lily James) is because, for women, society abhors the aged and venerates the youthful. It's not deep (and maybe it's not meant to be), but it does add a little bitter undertaste to its "happily ever after."

Orphaned Ella, dubbed "Cinderella" for her sleeping among cinders to keep warm, is sorely misused by her stepmother and stepsisters (Sophia McShera and Holliday Grainger) until the night her Fairy Godmother shows up and tricks her out but good, the better to meet her Prince (Richard Madden). (CGI also helps by shaving a bit off the middle, because, frankly, size 0 is not 0 enough, amiright?) Thusly aided, Cinderella wins the Prince's heart, loses a custom-fitted glass slipper that nonetheless flies off with alarming regularity, and closes the movie looking a lot like Grace Kelly, which only adds another acrid undertaste to all that happiness.

I don't think all that bitterness is an accident. If there's anything the classically-inclined Branagh brings to the table, it's a sense of grand tragedy--a perspective, a cynicism that there's any such thing as a truly happy outcome. Not to say that this Cinderella is pessimistic, so much as that what it's really about is how if everything goes the way it's supposed to, you'll lose both your parents, learn that most people are not to be trusted, and discover that even situations that seem ideal are fraught with disappointment and disenchantment. There's a lovely moment late in the game where Cinderella comes to terms with the idea that she'll likely be locked in an attic to die and decides to embrace her one instance of extreme happiness as something ephemeral that will, in time, become a memory to keep her warm against the chill of the universe. Cinders. Yes, it's that kind of movie, and no amount of magical hoohah can distract--or, at least, distract for long--from it.

The refrain of the film is "be courageous, be kind" ("rewind," I want to add), and Cinderella demonstrates unfailing kindness to her tormentors throughout. It's not a weird message: although life is terribly unfair and laden with potentially-crippling tragedies and humiliations, a good attitude can sometimes save you for the next round. At the end, though, on the arm of her Prince, Cinderella turns around to tell her devastated stepmother that she forgives her, and it has about it the smug assholeness of the athlete who thanks God for helping him win a game. What works is Blanchett, forcibly refocusing the film away from its adorable animal sidekicks and predestined denouement directly back to her: middle-aged, twice-widowed, imprisoned in a time and place where a woman's only value is that which a powerful man places on her. By herself, she makes this Cinderella more Jane Austen than Brothers Grimm. When her ultimate fate is left ambiguous, and Branagh shoots her framed through the bars of a noir cage, Cinderella reveals itself as subversive in much the same way as last year's Maleficent.