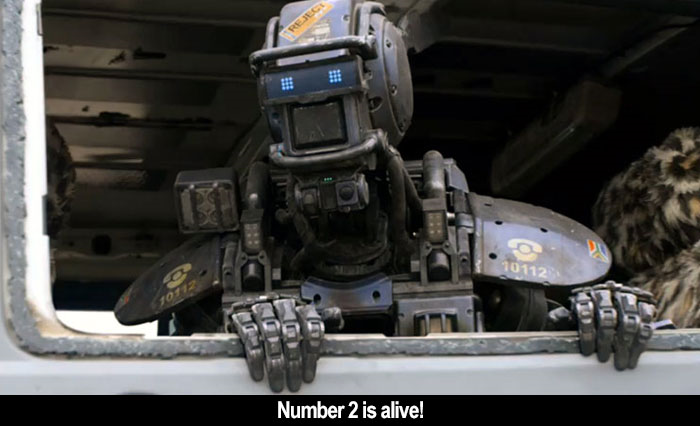 by Walter Chaw The schadenfreude winner of the week is Neill Blomkamp's benighted trainwreck of a fanfic reel Chappie, which presents a horrific tale of how a child raised by art-rap band Die Antwoord would grow to be this unholy Frankenstein of Sharlto Copley and Jar Jar Binks and Gorillaz and a mechanical rabbit. It's a mess. The completion of the Short Circuit trilogy no one was asking for, it's also an update of not only the Verhoeven RoboCop, complete with ED-209, but Blomkamp's own District 9 as well in its themes of class inequality, sentience, and transformation. In its favour is how legendarily irritating the Chappie character is, to the point that when the slo-mo "hero strut" happens in the second half, the compulsion to punch the movie in its neck is nigh irresistible. To its detriment, Chappie purports to have solved the puzzle of digitized sentience, Transcendence-style, and in the process gifted immortality to Björk-lite squeaker Yolandi Visser. That's at least Fourth Circle of Hell stuff right there.

In a not-so-distant future where Anderson Cooper looks exactly the same, Capetown, South Africa deploys a bunch of robot-bunnies that reduce crime instantly. Leave it to good-hearted programmer Deon (Dev Patel) to gift sentience to one of the robo-bunnies, who is promptly adopted/stolen/given to Die Antwoord. This means, of course, that in a film with Hugh Jackman and Sigourney Weaver, the stars are Die Antwoord and the voice of Sharlto Copley, who learns, under their loving tutelage, how to Fred Sanford-walk, throw shiruken, wear bling, and get vandalized with dollar signs and obscure, instantly-regrettable spray-painted slogans. He learns to carjack, too. This would all be kind of interesting if it were about how certain cultural signifiers can lead to the absolute corruption of impressionable youth, but alas Die Antwoord are the heroes of the piece, uncomfortably fetishized by superfan Blomkamp. Imagine a movie that casts Taylor Swift as the role model for a killer robot. Actually, that would be awesome.

Less awesome is how what is more or less an ADHD child personality ("I hate you! Chappie hate you," plus all-time classic: "Why you lie? Why you all lie?") dominates the proceedings with its equally simple-minded guardians, leading to a never-in-question showdown with "The Moose"-209--remote-piloted by evil villain Jackman--that Blomkamp assembles in his progressively more grating staccato style. Chappie can't even make up its mind about what it thinks of artificial intelligence. Deon refers to The Moose derisively as having "no mind, not like you, Chappie," and it's clearly set up as an example of the dangerous militarization of the police force. But the police force is already militarized with its horde of servile metal Gungans, is it not? And hasn't granting sentience to Chappie been an ill-advised clusterfuck of titanic proportions? This is without touching on the weird epilogue, where eternal awareness trapped in the body of what is essentially a laundry machine is celebrated as a good thing.

Existential disturbance is the heart of Ken Scott's at-times-shockingly unhappy Unfinished Business. A Vince Vaughn star-vehicle (which is all you really need to know), it casts Vaughn as mid-lifer Dan Truckman, who, on the heels of a nasty dust-up with his boss, Chuck (Sienna Miller), decides to start his own company with the older but likewise-bitter Tim (Tom Wilkinson) and mentally-challenged former Foot Locker employee Mike Pancake (Dave Franco, playing his brother). Dan bets it all on the chance to steal a major client out from under Chuck, flying his motley little crew over to Europe where, among other things, he goes to a nude German unisex spa, finds himself the main exhibit--"American Businessman 42"--in an avant-garde museum/performance-art piece, and does an entire scene surrounded by penises in a gloryhole gallery. This leads to the film's funniest moment, as Mike Pancake declares that "the penis touched my face," which is less homophobic than just generally unsanitary.

Unfinished Business is two disparate films trying to occupy the same space. On the one hand, it deals in a genuinely haunted way with growing old, regretting not doing everything you should have done when you were young enough to do it, and struggling with the responsibilities of being a grown-up. Director Scott demonstrates either a deft hand or enough sense to not get in Wilkinson's way when, after taking a tab of ecstasy, Tim discovers bliss in dancing with a pretty girl at an all-night rave. It's a beautiful moment in the middle of an ugly film that tries to make jokes out of boobs and sexual positions; out of Vaughn's package in yoga pants; out of troubled children needing their father to come home already. The stakes are at once too high and nonsense. The performances are either heartbroken and brilliant (Wilkinson), or absolutely empty and disrespectful of the Farrelly Brothers' legacy of sensitivity to disability (Franco). The problem might be that when it's good, Unfinished Business is a bitter, bitter pill--and when it's bad, it's as desperate and unfunny as the exhausted Vaughn patter meant to disguise it. In a different decade, this thing would have starred Steve Martin. And it would have been amazing.