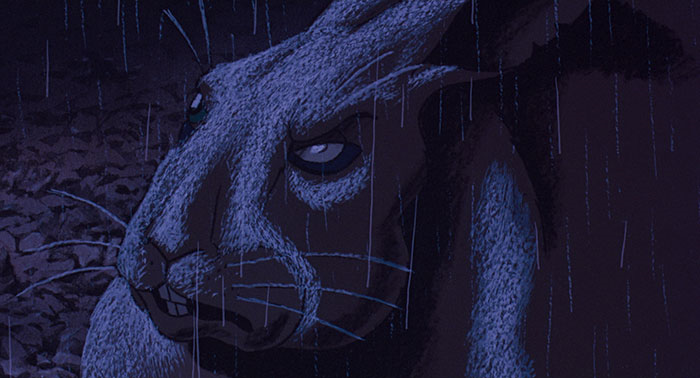 by Walter Chaw Unsentimental and terrifying and set against lovely, John Constable-esque watercolour backgrounds, Martin Rosen's adaptation of the Richard Adams novel Watership Down arose in that extended lull between Disney's heyday and its late-Eighties resurrection. (This period also saw, in addition to Rosen's film of Adams's The Plague Dogs, Rankin & Bass's The Last Unicorn and Ralph Bakshi's most productive period, which included 1978's The Lord of the Rings.) Watership Down points to the dwindled potential for American animation to evolve into what anime has become: a mature medium for artistic expression of serious issues. A shame that this flawed piece is possibly the pinnacle of animation's ambition on these shores, Richard Linklater's Waking Life notwithstanding.

Following a group of rabbits convinced that the timid Fiver (voiced by Richard Briers) has had a prophetic vision of doom for their warren, Watership Down is essentially about the search for refuge in the midst of a cruel world. A brilliant opening sequence by John Hubley details the creation myth of the rabbits, offering each animal on the planet a vicious gift and a taste for rabbit flesh that is protected only by a fleetness of foot and a highly-developed community warning system. Though much can be made of the film's socio-political commentary, the Adams novel is far more fertile a source for such rumination; Rosen's film is refreshingly free of pretension and resists even the easy target of man's inhumanity to vermin. Watership Down is essentially a handsomely-mounted adventure sold with allegorical elements and a few sticky archetypes.

A struggle for freedom and an urgent search for mates with which to propagate their species, Watership Down boils survival down to its base elements. In so doing, it draws the link between survival and loyalty and friendship in the sharpest possible terms--the film is an exercise in primitivism that rings with the taint of simple but essential truths. Accordingly, there is a good deal of violence in Watership Down, with death striking suddenly and with tragic arbitrariness. For that frankness and honesty, the picture may be more appropriate for young children than a legion of condescendingly sugarcoated Disney fare.

The problem with the film is twofold. On the one hand, Watership Down's character animation is shoddy, making some actions needlessly mysterious and the principal figures largely indistinguishable from one another; on the other hand, the process of adaptation and compaction has resulted in a few rather abrupt scene changes. Above its shortcomings, Watership Down is haunting (particularly a near-death nightmare underscored by Art Garfunkel's "Bright Eyes" and the impressionistic fate of the hero-rabbits' warren) and unusually thoughtful for something produced in what is still thought of in the United States as a children's medium. A shame that save the rare aberration, in the Disney-dominated United States, animation still is. Originally published: May 8, 2002.

THE BLU-RAY DISC
by Bill Chambers Criterion's Blu-ray release of Watership Down represents a solid if not revelatory uptick in picture quality compared to Warner's stateside DVD(s). An A/B comparison actually reveals that Criterion's 1.85:1, 1080p presentation, sourced from a slightly funky negative, is the tighter-cropped of the two, specifically at the bottom of the frame, but Warner's image is also narrower and has perhaps been artificially stretched to fill the screen on 16x9 displays. (The liner notes indicate that 1.85:1, as opposed to 1.78:1 or 1.66:1, is director Martin Rosen's preferred aspect ratio.) Colouring is similar but the Criterion palette has more depth and subtler peaks and valleys between light and dark tones, and of course film grain is far better resolved in HD. Its mere presence is refreshing after suffering through too many denoised Disney titles; so much of the background texture, not to mention the film's hand-painted charm, is bound up in the stuff that filtering it out would be pure revisionism--and, I suspect, wreak havoc on the already photographically-soft detail. The attendant uncompressed 2.0 stereo audio doesn't exhibit a lot of left-right imaging, but Angela Morley's score and Art Garfunkel's "Bright Eyes" sound as lush as they ever have or probably could.

Inaugurating the disappointingly small portion of video-based extras is "Passion Project: Martin Rosen on Watership Down" (17 mins., HD), in which Rosen talks about, among other things, considering different approaches to adapting Richard Adams's novel before settling on animation as the most feasible, taking over for supervising animator John Hubley when the two reached a creative impasse (Hubley passed away soon after), and Garfunkel's about-face on "Bright Eyes," which the singer hated until it became a surprise hit. It's a tantalizing-enough piece that I wish Rosen had recorded a feature-length commentary. "A Movie Miracle: Guillermo del Toro on Watership Down" (12 mins., HD) sees the Criterion fixture championing the movie's rough edges and tracing its lineage back to the pioneering rebels at UPA, home of Hubley's "Mr. Magoo". Lastly, returning from Warner's Deluxe Edition DVD and upconverted to HD, "Defining a Style" (13 mins., HD) asks animators Alan Simpson and Colin White, background artists Denis Ryan and Gary Sycamore, and voice actor Joss "Diplomatic Immunity!" Ackland to reflect on their respective contributions to the production. It's a wistful, modest reminiscence though not an essential one. The entire film is viewable in storyboard form in an optional picture window, and this feature joins Watership Down's overlong, incohesive theatrical trailer (HD) in rounding out the platter. Former comics writer Gerard Jones authors the foldout essay, beautifully. For what it's worth, the movie now opens with a Janus Films logo in place of the Warner shield. 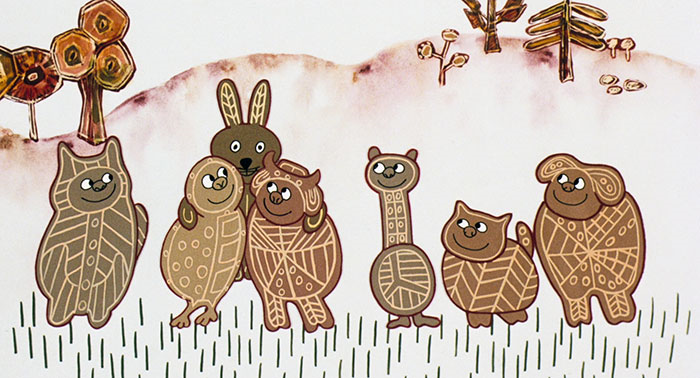