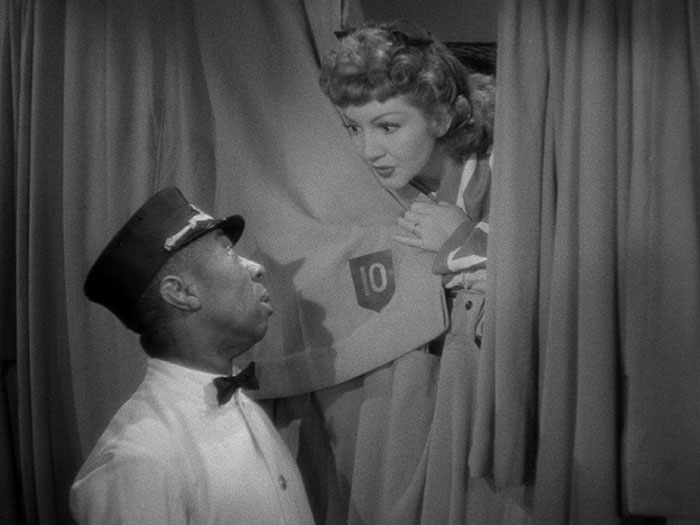 by Jefferson Robbins The Palm Beach Story is lesser candy from a master confectioner--so it's still worth a taste. Preston Sturges's screwball portrait of a marriage upending itself braids together multiple comedic forms: road trip, Elizabethan comedy of errors, have-nots infiltrating the haves, and a distinct and strange but intriguing touch of fairytale. For instance, the yacht on which jillionaire J.D. Hackensacker III (Rudy Vallee) absconds with disenchanted young wife Gerry Jeffers (Claudette Colbert) is christened The Erl King. Sure, Hackensacker is an obvious gloss on Rockefeller and there's the play on "oil king," but the Erl King of legend is a kidnapper of innocents. (Goethe's poem casts him as a child murderer.) Gerry's scratching a five-year itch, taking flight from glum husband Tom (Joel McCrea), partly on the advice of another "king." "Cold are the hands of time that creep along relentlessly, destroying slowly but without pity that which yesterday was young," warns the millionaire Wienie King (Robert Dudley), after moseying into the Park Avenue duplex Gerry and Tom are about to lose. (A Tiresias who's deaf rather than blind, he can't hear anything anybody says, so he might as well be talking to himself.) Although "adventuress" Gerry, abandoning her marriage without money or clothing, can still wield youth and beauty as sword and shield, she pays a price for the attempt, first charming and then dodging the heavily-armed, dangerously inebriated Ale & Quail Club as it pursues her throughout a southbound train. They're a Wild Hunt straight out of pagan lore.

Fantasy butting up against reality: that's of a piece with the Sturges canon, although in other outings--The Lady Eve, to take one example--it's a fantasy of expectations, of whom two people pretend to be to each other and to themselves. That layer persists in The Palm Beach Story, this time with lovers introduced as brothers and princesses wooed in disguise; it's just odd to see the fantasy expressed in signposts of outright folklore. The "happily ever after" interludes that bookend the movie are Sturges playing with the borders of story, with what happens once love is won. Watching one Claudette Colbert escape from bondage in a broom closet while a second Colbert dons a wedding gown and scrambles to her nuptials, before the opening credits are even over, we've walked into the aftermath of an earlier screwball farce. "Of course, that's another plot entirely," Tom says by way of dismissal, only to usher in a second wedding scene that closes the movie--conjuring up characters with no agency of their own to solve the core dilemma, then banishing them back to their own story. We're left to wonder if the right Joel McCrea married the right Claudette Colbert in the first place.

That's deliciously disorienting, but only retrospectively, with the whole film concretely in mind and with a feel for Sturges's lexicon. In the moment, as a home viewer, you're grabbing at the remote to page back a scene and farther, to the opener again, in search of the connective tissue. Imagine the consternation of 1942 moviegoers whose attention might've lapsed, even for a moment. So much here is impossible, including Tom's MacGuffinish dream of a science-fictional airstrip suspended above the city. That's the fulcrum for a test of Gerry's love: When she realizes her effect on Hackensacker, her first move is not to woo him and his money for her own, but to wheedle the $99,000 Tom needs to advance his project. Again, in true Sturges form, Hackensacker can't see what Gerry really is, or wants, or means--she keeps breaking his glasses, the pince-nez that Vallee fiddles with like punctuation.

Released during wartime, The Palm Beach Story feels like something from an earlier age. There's no mention of the war at all, while Hackensacker and his sister, the Princess Centimillia (Mary Astor, more at home here than in The Maltese Falcon), live a high life that would seem more at home in '30s screwball farces than in the darkest days of global conflict. The settings are lush, a far cry from the daily grind of rationing and spare savings spent on war bonds. In 1941, The Lady Eve and Sullivan's Travels provided a glimpse of how the Other Half lives while acknowledging you probably just came in from the dole line. One year later, the United States had moved away from scarcity and instead towards self-deprivation, and Tom and Gerry's dee-luxe apartment in the sky and the Hackensackers' Florida complex may have felt not so much escapist as indulgent. (Today, one has to vault past a lot of painful racial caricature on Gerry's train ride, not least the Ale & Quail Club's near-homicidal abuse of bartender Fred "Snowflake" Toones.)

Class and taste issues could help explain the film's relative commercial failure in its day, though we can't ignore its odd structure and mischievous shrug of a resolution. We're left to seize on the firmly organic moments, like Tom's intimate ritual of unfastening the difficult back-clasps of Gerry's gowns. (The Palm Beach Story, clothing Colbert in design after design by Irene Lentz, reasserts the star's status as Clotheshorse of the Gods.) Sturges here is toying with the tropes he mastered in earlier works, and that's laudable, but he's also toying with the audience's expectations--whether he cares or not. An early hyphenate auteur in film comedy, Sturges may have banked on moviegoers being in on the joke, the way his spiritual heirs Joel and Ethan Coen often do now. (The close of Burn After Reading, with J.K. Simmons summarizing the plot as "Fuck if I know what we did," has always struck me as a key Sturgesian note in the Coens' canon.) But was there a cult of the director to forgive his flaws in 1942, the way there is today? 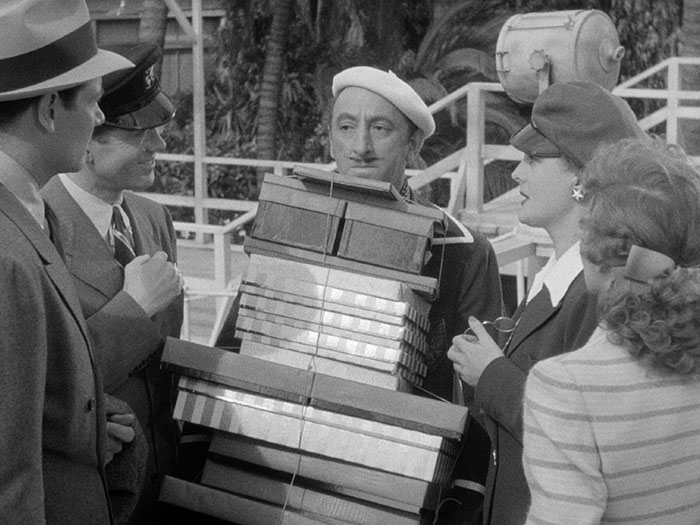 THE BLU-RAY DISC
My personal litmus for Blu-ray renderings of this era in cinema is what I call the Copacabana Test: Watch for the scene where a midnight ballroom dance is shot through a fringe of palm trees. There's always one, and it puts every element that can go wrong in a HiDef authoring into the same frame. This passes. Criterion gives The Palm Beach Story a 1.37:1, 1080p restoration that smooths but doesn't airbrush the source print. I like some crackles and ripples in my midcentury flicks, consarn it, and this edition shows off a few, but of course the boilerplate technical liner notes make much of the dirt and scratches that were removed by both manual and digital means. I like the result: Pleasantly soft while still textured, distinct in contrast, free of crush in its blacks, and boasting an opening-night level of fine grain. Attended by a single-channel LPCM sound treatment that shoots the crackling dialogue straight into your frontal lobe but, owing to the age of the source, can't do much more, it's a Sturges as Sturges should be seen.

Film scholar James Harvey leads the disc's sparse extras with a 17-minute HD talking-head assessment of The Palm Beach Story, which starts off talking about this "strange" entry in the director's filmography and eventually diverts to Sturges's relationship with his father. A little bit of everything, served up quick and conversationally. Bill Hader, whom I did not expect, does a more personal reflection on his experience of seeing the film and the parallels between Sturges's writing style--shouting out his dialogue to a secretary for transcription--and the sausage-making of "Saturday Night Live". He cracks up in this ten-minute HD featurette simply paging through the script; and of the infamous ending, Hader imagines the filmmaker saying, "Fuck you, they're twins." There is absolutely no reason to listen to a 1943 radio broadcast on Blu-ray, yet here's The Palm Beach Story as enacted by the Screen Guild Theater, boiling the 88-minute movie down to 30 minutes with Randolph Scott in the McCrea role. It's for the completists, I guess, but it's not a patch on its parent film. A Sturges-written short, Safeguarding Military Information (12 mins., HD), went out in 1941 to reinforce the loose-lips-sink-ships diktat for wartime servicemen, and it's on board, too. Critic Stephanie Zacharek takes on essay duties for the insert booklet, hitting all the notes that this review has failed to sound. Follow Jefferson Robbins on Twitter