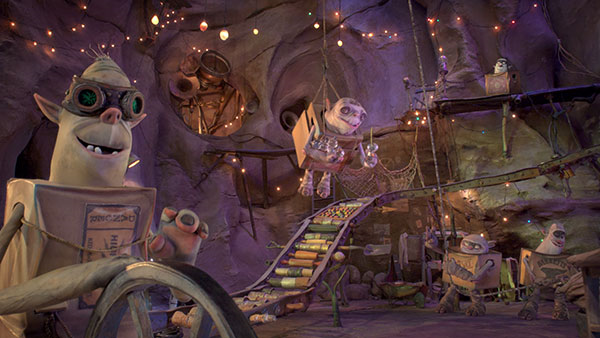 ***/**** Image B- Sound A Extras B+
screenplay by Irena Brignull, Adam Pava, based on the book Here Be Monsters by Alan Snow
directed by Graham Annable & Anthony Stacchi

by Walter Chaw Stop-motion animation studio Laika (Coraline, ParaNorman) continues its winning streak with the perverse, lovingly-detailed The Boxtrolls, which nails the company's developing penchant for inserting a sting of relevance on the trailing end of assorted Nick Park-ian silliness. It's basically the usual kid-flick moral of not judging lovable books by their horrible, green, warty covers, but there's also a little bit about the danger of starting wars based on black pretense for unsavoury purposes. Likewise buried in the puns and gross-out gags are a class melodrama, a deep criticism of the ruling class, and a fairly disturbing aside about anti-intellectualism and the misuse of technology. It's Schindler's List in the sense that even that film was Spielberg's own remake of E.T., substituting the industrious, wizened space goblin for Ben Kingsley; The Boxtrolls isn't as effective a Holocaust/Łódź ghetto allegory as the hotel-clearing in Babe: Pig in the City, but no question the aim of its villains is ultimately genocide.

Therein lies a real rub with the film: Should we take it as criticism of the West picking a fight with non-participants in our War on Terror, then suddenly we're suggesting real culpability in creating unrest, nursing hatred of an Other as part of our cultural rigor, and using said mess to invest in advanced weaponry. The Boxtrolls, in its cultural context, is clear-eyed, even if its importance is ultimately undermined by its broadness. It's akin in that way to Disney's Big Hero 6, a movie that's essentially about a team of Marvel heroes comprising two Asians, a "dizzy" blonde, a black guy, a stoner, and a giant, puffy robot who use real, solid science to find a solution that doesn't result in vengeful murder. Both films boast no small measure of cultural significance--and neither has anything to say beyond the usual platitudes and appeals. Maybe there's nothing left to say.

Eggs (Isaac Hempstead Wright) is Tarzan of the Boxtrolls, abducted as an infant by the titular troglodytes and raised as one of their own until, one night, he's discovered by his "Jane," Winnie (Elle Fanning), and returned, as it were, to human society. Eggs's existence is problematic for evil social climber Archie Snatcher (Ben Kingsley, again), who, coveting a meaningless emblem of status and a seat at a cheese table despite his allergy to the stuff, promises detached Lord Portley-Rind (Jared Harris), Winnie's father, that he will exterminate every last C.H.U.D. in the land. If Eggs hasn't been eaten, see, then the Boxtrolls are just a harmless immigrant class, doing their best to eke out an existence in the underbelly of the majority. This would be Frontiers if it were a French movie, but it's not, so The Boxtrolls paints the titular creatures as timid victims in need of Eggs to move them the quarter-inch it takes them to care about their own well-being.

The picture has layers but lacks nuance. Implying there's any kind of possible, peaceful resolution in matters of class and race is naive, kids' film or no. It's clever, The Boxtrolls, though it fails as satire because it punishes the villain poetically, and resolves its conflicts neatly. The best part, actually, is a closing-credits time-lapse sequence that shows Laika's puppeteers animating a conversation between two characters. It's a testament to the ingenuity and work invested in the piece, certainly, but it also draws a strong parallel between the guys labouring behind the scenes of a project like this and the Boxtrolls toiling at the bottom of the socio-economic totem pole. It's self-aware and vital, in other words, speaking at once to Blake's "infernal method" and to the idea that for all that work, The Boxtrolls should have had something a tad more bitter on its mind. The movie is great fun without it, granted, but it's forgettable, too. 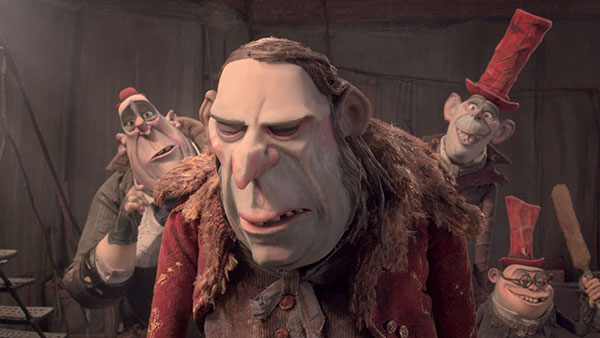 THE BLU-RAY DISC
by Bill Chambers Universal brings The Boxtrolls to Blu-ray in a Blu-ray 3D platter that also features a 2-D viewing option for folks behind the times. Like me, as it happens. The 1.78:1, 1080p 2-D transfer is pretty but not without issues, chiefly a high frequency of digital chatter that becomes quite apparent on dim, static backgrounds. How much this owes to the film being shot with still cameras vs. duelling 3-D and 2-D encodes sharing a meagre BD-50 is difficult to say, but I'd be curious to audit the single-issue 2-D version to see if it looks better compressed. It doesn't help that contrast seems kind of weak beyond the movie's own sooty aesthetic, with flat dynamic range and a fair amount of black offset curtailing the visual pop of both day and night scenes. Fine detail is glassy and gratifyingly tactile, at least, and the attendant 5.1 DTS-HD MA track honours a soundmix as credible as the animation when it comes to defining the abstract. Full, deep, and immersive, it really shines. On board as well is a feature-length yakker with co-directors Graham Annable and Anthony Stacchi, engaging hosts whose comments nonetheless frequently overlap with supplementary material that has the advantage of visual aids. As someone who's invested a lot of time in animating things destined to be seen fleetingly, I liked the part where they lament the sets--gorgeous miniatures that wind up on screen for mere seconds, often out of focus in the background. The two additionally draw attention to the seamless CGI, typically reserved for skies and other distant backdrops.

Video-based extras begin with five Preliminary Animatic Sequences (read: deleted scenes), again featuring optional Annable/Stacchi commentary. Consisting of thumbnail sketches and scratch tracks, these scenes were cut for a variety of reasons but in most cases, say the filmmakers, helped establish the movie's tone and planted the seed for something similar, with a casual dinner party becoming a banquet, for example. Next, "Dare to Be Square: Behind the Scenes of Boxtrolls" (33 mins., HD) consists of five individually-playable segments--"Voicing the Boxtrolls," "Inside the Box," "The Big Cheese: Allergy Snatcher," "Deconstructing the Dance," and "Think Big: The Mecha Drill"--and focuses heavily, though not exclusively, on the technical obstacles particular to this production. We see for ourselves that Ben Kingsley recorded his performance from a horizontal position, the better to channel the voice from his stomach. Often the locus of discussion here, Kingsley's character presented a unique set of challenges, especially his allergic reactions. If you're an engineer at heart or a steampunk fetishist, some of these featurettes will play like porn, especially the one about the Mecha Drill's 600 moving parts ("It's a puppet, it's a prop, it's a set," lead animator Travis Knight says elsewhere)--not counting an iPad mini that served as the "furnace," displaying fire that was created by running strips of cheesecloth behind an occlusion of glass. A 'Sweded' effect, if you will, it looks bloody fantastic.

Another batch of short docs--" The Nature of Creation," "Trolls Right Off the Tongue," "Allergic to Easy," "Let's Dance," "On the Shoulders of Giants"--runs 13 minutes in total. These are more promotional in nature, although they too contain some neat-o insights into the magic of Laika, like how they simulated a reflection of rippling water using glass from a shower door. "You become more appreciative of the things you take for granted," says rigging supervisor Ollie Jones, and while he's referring to simulating the environments we inhabit, he could just as easily mean a spine that isn't twisted like a pretzel from all the physical toil that Knight describes. Previews for a Barbie thing and a Curious George thing round out a combo pack that includes DVD and digital copies of The Boxtrolls. 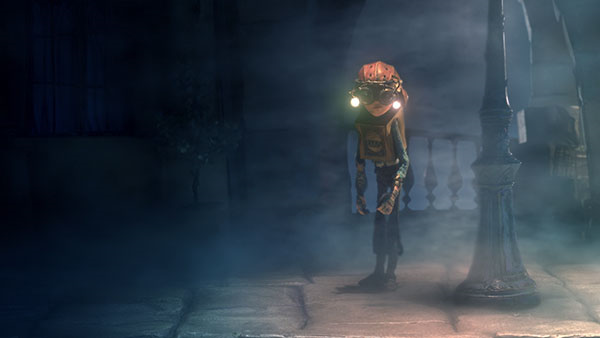