by Bill Chambers Spawning a television show and solidifying the Hollywood career of German director Roland Emmerich, 1994's Stargate was the last movie to get the memo that Abyss-ian water walls and morphing technology no longer evoked World's Fair awe. These special effects are merely the epitome of Stargate's second-hand wonder; part of the film's value as a curiosity piece is its New York street-merchant vibe: like peddlers of the Rolux watch or Parda handbag, Emmerich and co-producer/co-writer Dean Devlin are selling us an approximation of a blockbuster by a licensed hitmaker, and we excuse them the same way we allow for the smudgy print of carbon copies or the colour bleed on VHS dubs. It must be a human impulse to absolve a facsimile of its absence of novelty.

In fact, Stargate's suckage has nothing to do with how derivative of cinematic rollercoasters it can be (the picture sent out I.O.U.s to, in short order, James Cameron's entire oeuvre, the Indiana Jones trilogy (itself a three-film hommage to black-and-white jungle serials), Lawrence of Arabia, Close Encounters of the Third Kind, Star Wars, E.T., and, in one curious stalk-and-slash sequence, Halloween)--the film's problem is that it is a damn load of gibberish. A guest joined me midway through a viewing of Stargate's Director's Cut, one of the two versions included on the new Ultimate Edition DVD release from Artisan, and asked me to recap the first half of the picture.

"Well, see," I began, "they found some giant tablets and a huge ring in the Egyptian desert, but before that, several thousand years before that, there was this sandstorm caused by a starship. Anyway, it's present day, and James Spader, the one in the glasses, is really smart, and he's translated the tablets that activated the circular thingy, which is the Stargate, and which James Spader has just entered with Kurt Russell--who's all suicidal--and Kurt's ethnically-diverse group of soldiers. And it's this whole other planet on the other side, I think, but full of, I think, ancient Egyptians, who like chocolate, and there are weird Tauntan creatures that also like chocolate, and though they were able to enter the Stargate, James Spader and company are missing a piece of equipment or some kind of code that enables them to return home. So while everybody's looking for that spare part slash magic number, Kurt Russell has gone off by himself to plant a bomb."

"Why did he plant a bomb?" asked my guest.

"Because he brought it with him. Duh."

Now, I'm being a little unfair, because the filmmakers lay a lot of ground for our assumptions, and most of mine proved correct when I listed to Emmerich and Devlin's DVD commentary. (For once, I appreciated the yak-track crutch of recapping plot.) The pair, while serviceable visual hacks, are such awful screenwriters in every facet of the game that it's kind of disheartening to see their material continually attract such wonderful cult performers as Russell and Spader, Jeff Goldblum (Independence Day), and Jean Reno (Godzilla)--mayhaps the notion of rescuing a character from the page causes an actor's mouth to water as much as the guaranteed exposure offered by pictures as base and pandering as those on the Centropolis label (Devlin and Emmerich's now-defunct company). Never underestimate a movie star's ego.

For what it's worth, James Spader does nice work playing against type as an intellectual nebbish, and Russell incorporates what could've been an albatross--the death of his character's young son--into his every delayed gesture without seeming merely thrown by the film's premise, whose machinations are so befuddling as to deter one from inspecting Stargate for political and allegorical angles. As a cocktail of Eighties cinema, the film is palatable, but let's not pretend it warranted a following.

Restored to the Stargate Director's Cut is some nine minutes of footage, the majority of it concerning the voiceless members of Russell's crew; French Stewart's squinting soldier is elevated to a speaking part in the DC, which opens with a sequence--the aforementioned spacecraft encounter--that was originally a shorter flashback to introduce the villain, Ra (Jaye Davidson of The Crying Game), a graceless alteration that saddles the film with competing prologues. The theatrical cut is, in other words, better paced and no less coherent than the alternative--I had a similar reaction when comparing the theatrical and longform versions of Emmerich's Independence Day.

THE DVD
Artisan's "Ultimate Edition" DVD release presents the Director's Cut and theatrical versions of Stargate on separate platters within the same keepcase. Having inherited a ton of product from LIVE, Carolco, and others (PREMIERE MAGAZINE estimates that Artisan's catalogue holds 7,000 titles), the studio has gained a foothold on the deluxe market in recent months with snazzy DVD packages for favourites like the Rambo series, Reservoir Dogs, and Glengarry GlenRoss (and this summer promises to outdo their own bar-raising efforts on the T2: Ultimate Edition with an "Extreme Edition" of the film), but the Stargate: Ultimate Edition is a routine effort at best. 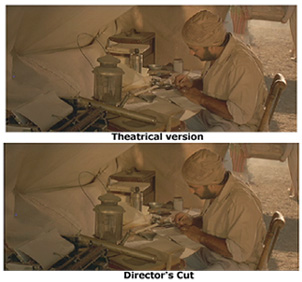 Each in 2.35:1 anamorphic widescreen with your choice of 6.1 DTS-ES or 5.1 Dolby Digital EX soundtracks, there is no discernible qualitative difference between the duelling Stargates save a sliver of additional screen information on all four sides in the Director's Cut (see example at left). Grain is quite harsh at times and there are instances of aliasing, though what bugs most is oversaturation. I'm unfortunately unable to compare the image to that of previously-circulated Stargate DVDs; as the Ultimate Edition marks the home-video debut of a 16x9-enhanced transfer as well as that of the film's DTS mix, I imagine it will automatically become the preferred option. The DTS audio incorporates the LFE channel more smoothly than does Dolby, and its soundfield is far more three-dimensional. Take a listen not only to the chintzy yet fun warp through the Stargate (chapter 9), but also the air raid on the people of Nagada (chapter 25); Stargate was a pioneering effort in digital sound and its DTS sound remains an aggressive treat.

Devlin and Emmerich's film-length commentary supplements Disc One's Director's Cut only. It's like uh an interesting like uh session with like uh like uh you know like uh like uh... No wonder Harlan Ellison threatened to punch Emmerich in the face for "talking like a Valley Girl." There are tidbits to be gleaned, for sure (or is that fer sher?), like uh composer David Arnold's fascinating process of discussing his score-in-progress with the leads, but they are few and far between the verbal tics of man to whom investors have entrusted screenplay duties on many occasions. Erich von Däniken, author of Chariots of the Gods, walks us through his theories on extraterrestrial architecture in "Is There a Stargate?" (12 mins.), a silly albeit intriguing featurette in which the arrangement of the Mexico pyramids is shown to form a starmap when viewed from above.

Over on Disc Two, "The Making of Stargate: Creating a Whole New World" (24 mins.) is a (16x9-enhanced) retrospective that focuses on the film's design team (Emmerich and Devlin are AWOL and the actors appear solely in interviews conducted during production), the execution of various F/X, and the challenges of shooting in the Arizona desert, which sometimes reached temperatures of 120° and above. A terrifying portrait of animal abuse emerges as Stargate's equine stars are shown to have worn Tauntan costumes in the sweltering heat, while it is also made clear that no one noticed producer Mario Kassar's suggestions for a reconceptualization of Ra's fighter planes resulted in a bald-faced rip-off of the Klingon Bird of Prey. Then again, for a film founded on the principle of giving the audience pre-digested formula, perhaps they were consciously dismissive of the similarity. Production notes (abridged in the enclosed booklet), Stargate's American and international trailers (the latter is vastly superior for being so much less patronizing), and cast and crew bios/filmographies round out the second disc and the Stargate: Ultimate Edition proper. Originally published: February 8, 2003.