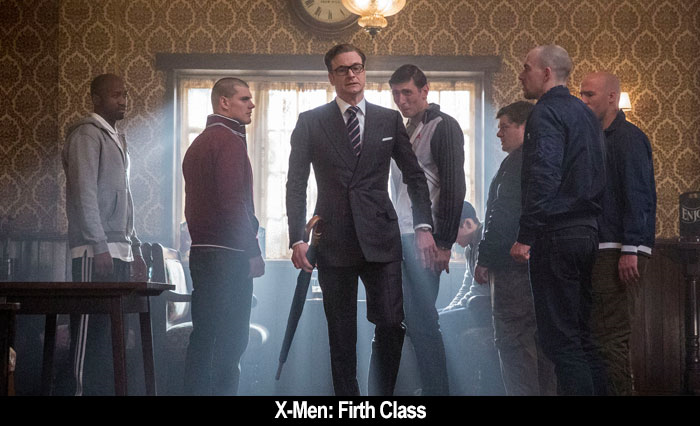 by Walter Chaw Whatever surface similarities they might share, the difference between something great like John Wick and something like Kingsman: The Secret Service (hereafter Kingsman) is that Kingsman is smug and misanthropic. It's a self-knowing ape of the James Bond franchise, literally name-dropping both it and Jason Bourne with a kind of Cabin in the Woods smirk as it goes through the comic-book, Mark Millar-ugly motions of gadgets, high espionage, and a plot by lisping supervillain Valentine (Samuel L. Jackson) that involves the cell-phone triggered, rage-fuelled annihilation of billions. (Yes, it's also a weird rip on third-rate Stephen King novel Cell.) Gone mostly unexamined by critics for fear of "spoiling" the film, I guess, it features a scene in which Barack Obama commits treason and is then rewarded with an explosive decapitation--which is, itself, a form of treason, I think, although I admit the modern political landscape has made the limits of treasonous disrespect of the office somewhat murky to me. It's a jaw-dropping moment in a film that has not only a foreign head of state offer anal sex as a reward to our sprightly young protagonist, but also our Bond-ish hero, Harry (Colin Firth), slaughter a few dozen unlikeable yet innocent civilians in a church. Edgy, non?

Non. It's not edgy, it's offensive for offensive's sake: the equivalent of the lowbrow wokka wokka of the Rogen/Franco cycle in that it traffics in shock tactics--lives and dies by them, in fact, so once the shock wears off, all that's left is the desperation. You can only tell "the aristocrats" joke once. Anyway, Harry recruits young Eggsy (charisma-free Taron Egerton) to the titular spy service, but first Eggsy must survive the training along with a bunch of other recruits and stuff, and it goes on like that for a longer time than it should, given there's never much doubt about what's going to happen. There's a subplot involving Eggsy's blousy, abused Ma (Samantha Womack), which leads to an unfortunate Superman II bully comeuppance epilogue that is almost as unbecoming. The more I write about this movie, the more I hate it. Kingsman places a toddler in peril from its mother and makes Michael Caine the victim of what he does not smell (Iocaine powder in his bourbon); but on the bright side, it does give Mark Strong his best role in years. Branded instantly as "misogynistic," the picture is more catholic in its hatred of everyone. Besides, it boasts the best henchman in years in Gazelle (Sofia Boutella), who's like something out of a Matthew Barney fever dream with her prosthetic lower legs, sharpened to deadly knife edges and puncturing tools.

Another thing that separates something great like John Wick from something like Kingsman is that the action sequences in Kingsman, while undeniably kinetic and occasionally fun, are computer-engineered into a peculiar surreality. It makes the action easy to follow, I suppose, but so would extended medium shots. I've liked most everything director Matthew Vaughn's done to this point, and I'm tempted to blame the bulk of the film's ugliness on Millar's source material, but it's fair to wonder how well the stale British humour and flat characterizations would have played without the occasional ultraviolence. For what it's worth, I enjoyed Jackson's performance as an infantilized tech billionaire who serves a McDonald's banquet to guests of honour at his palatial estate. There might even be some interesting commentary in there about how it's people like this who run the world and will eventually ruin it with their best intentions, thus aligning Valentine with someone like Bill Gates (who, frankly, seems like a weird target). Better not to overthink it. Kingsman is bad, basically, and barely redeemed by good production values and the genuinely inspired Gazelle. It's probably worth noting, though, that it's still the third or fourth best adaptation of a Stephen King book.