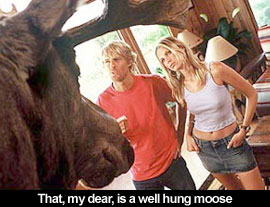 by Walter Chaw By the end of The Big Bounce, I was mildly surprised that it was still the same day I sat down to watch it. The film is aspiring to give Owen Wilson the role of the breezy, insouciant rake popularized by authors like Gregory MacDonald, Carl Hiaasen, and, more to the point, Elmore Leonard (who I guess wrote the source material, previously adapted into a vehicle for Ryan O'Neal), but succeeds mainly in making the likable Wilson tedious. More a mood piece than a heist flick, The Big Bounce also casts ex-MTV news anchorperson Sara Foster as some kind of femme fatale so vacuous, so bad an actress, that although she's stunning in a Nicolette Sheridan sort of way, she fails to convince that there's enough going on upstairs to be even vaguely dangerous. Foster's entire performance is a yellow bikini and a variety of lucky sheets used as impromptu wraps--an object who never convinces that she's an object on purpose.

Director George Armitage has been in this setting before with the underestimated Miami Blues, his protagonist there, as in his excellent Grosse Point Blank, a likable guy for the most part who's made some fairly awful decisions in his life. Same goes for Jack Ryan (Wilson--with no comment on the character named the same thing as Tom Clancy's über-conservative übermenschen), a laconic (read: somnambulant) petty thief and burglar who spends a lot of his time leering at scantily-clad women and robbing sorority houses. (The picture is thus misogynistic enough to be a Michael Bay film, but it's not nearly as exciting.) Enlisted in some half-baked plan to rob evil developer Ray (Gary Sinise), toadie Bob Jr. (Charlie Sheen), and muscle Lou (Vinnie Jones) by Ray's mistress Nancy (Foster), Jack mostly whiles away the hours running his mouth with lawman Walter (Morgan Freeman) and layabout pal Frank (Gregory Sporleder).

Every transitional shot in the film is stock footage of surfing, which by the fourth or fifth occurrence doesn't establish place so much as establish that it's daytime. An uncomfortable scene spent mocking a gay cop is amazingly insensitive and, worse, not the slightest bit funny, and a lovely woman (Anahit Minasyan) in various stages of undress throughout (like the rest of the women in the film) has been christened "#9." The Big Bounce is less offensive, though, than it is directionless and boring. Jeffrey L. Kimball's cinematography is underlit and slick (just like his work on Wild Things), Sebastian Gutierrez's screenplay is leaden and confused (just like his work on Gothika), and Armitage's direction, for the first time, really, is unimaginative and flat. When Walter says in his God voice that "sometimes things are exactly as they appear," listen. The Big Bounce appears to be a major disappointment that's sat on the shelf for a while before being dumped onto the late-January schedule. Originally published: June 30, 2004.