by Walter Chaw I recall Luc Besson confessing that his The Fifth Element was based on an idea he'd had as a child; I'm going to wager the same is true of his dreadful Lucy. It's a pre-pubescent boy's fantasy of cool: a mash of silly pop-science buoying a beautiful woman's mutation from impossible party girl into deity through the agency of stem-cell-related drug abuse. The good news is that South Korean superstar Choi Min-Sik (Oldboy) gets a mainstream American debut in a juicy role that nonetheless feels like a wasted opportunity (see: Beat Takeshi in Johnny Mnemonic). The bad news is Lucy is prurient pap that pup-critics will declare proof of "vulgar auteurism," no matter the redundancy and ignorance of the term itself. Perhaps fitting, then, that the only defense of a movie this obnoxious and wilfully dumb is a term and movement founded on the same principles. I've defended Besson in the past--I'm an unapologetic admirer of Leon/The Professional and The Messenger (and Danny the Dog, which he produced, is a peerless statement on the relationship between Western and Asian action stars). But Lucy is reductive, sub-La femme Nikita effluvia that takes a premise niftily played-with in Ted Chiang's beyond-brilliant 1991 short story "Understand" and grinds it into a grey paste.

Lucy (Scarlett Johansson) is roped into being a surgical drug mule by evil South Korean-in-Taiwan Jang (Choi). Upon accidentally assimilating a huge batch of miracle smack, she turns into Neo--and Johnny Depp in Transcendence, and Akira, kind of (but in a mini-skirt), and the Lawnmower Woman. Transcendence's own Morgan Freeman appears (not kidding) to intone gravely that humans only use 10% of their brains but, like the 20%-using asshole dolphins, should we ever use more, we'd be able to control time and space. I know, I don't get it, either. Apparently, producing new neurons means becoming telekinetic, which makes the process of changing hair colour and creating invisible Sue Storm force-fields a cinch! 100%? Omniscience, bitch. There are Malick-ian time-warps wherein Lucy contemplates australopithene Lucy and does the Michelangelo finger-touch. There's a scene on an airplane where it seems like Lucy disintegrates, only to later wake up in a hospital. Bad trip, indeed, man--but it was better in Poltergeist. Did I mention the dinosaur? Dinosaur.

It's all nonsense married to a few gun battles that have no weight because Lucy is omnipotent, remember? Freeman's Professor Norman gets the lucky task of looking amazed a lot, and at the end, the film tries to do something in tribute to Metropolis that I don't understand what it was. It also casually demonizes the Koreans, though it has someone speaking Mandarin to them at some point, so... Lucy plays like the cinematic manifestation of two kids having a conversation about what they'd like to see in a movie starring Scarlett Johansson: "So she gets smarter and then she knows gun-fu and then she turns into an oil blob." It's not a requirement that stuff like this make sense, of course, but it'd be a quaint and lovely courtesy if it at least maintained some kind of internal logic. That said, I rather enjoyed the first 20 minutes of the benighted thing, and it's short at a breezy 88 minutes. Johansson continues to surprise by choosing roles that comment on her beauty through seeking ever-escalating notions of breaking through physical barriers. Lucy will ultimately find eternity, then, as a road-marker along the way to Johansson's personal actualization. She's the best thing in the movies right now. Even the shitty ones. Originally published: July 25, 2014.

THE BLU-RAY DISC
by Bill Chambers Universal brings Lucy to Blu-ray in a sleek, deservedly-praised 2.40:1, 1080p presentation. This is one of the best transfers I've ever seen of an all-digital source (vive l'Alexa!), razor-sharp yet glassy and cinematic in motion, filled with vibrant colours, rich, inky blacks, and bleach whites that aren't simply the fruit of overexposure. There is one fleeting shot of a sunset with disappointingly polarized highlights; the rest? Phenomenal--and entirely free, that I can see, of compression issues or artifacts. The attendant 5.1 DTS-HD MA track is a similarly brilliant showcase for propulsive audio that, between the action elements, Eric Serra's deep-bass synth score, and some gratifyingly abstract usage of the LFE channel, puts the subwoofer through its paces. Dialogue, for better or worse, stands crisply above the cacophony (this almost seems like one of those near-field mixes where dynamic range is decreased to lessen fluctuations in volume, particularly of voices), while the rear channels work to fabricate a near-constant, persuasive ambience. Too bad Universal didn't include a Dolby Atmos option, since the film had one in theatres. Also on board are two making-of featurettes--"The Evolution of Lucy" (16 mins., HD) and "Cerebral Capacity: The True Science of Lucy" (9 mins., HD)--that find experts like Duke Institute's Dr. P. Murali Doraiswamy attempting to give credence to the movie's junk science amidst helpful diagrams like this: 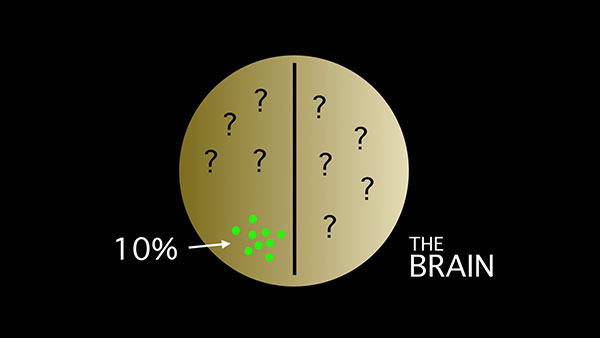 Morgan Freeman defends Lucy best by explicitly calling it a fantasy, while Scarlett Johansson doesn't really even broach the goofy premise. Instead, she reflects on the challenge of playing someone who's transcended emotions without lapsing into monotone. Director Luc Besson, who doesn't usually make himself this available, talks about a research process that saw him sitting down with several Nobel winners and asking them questions only a screenwriter would ask, and says Lucy took twelve years to write because of his own trickling intellect. Trailers culled randomly from the web round out the disc, which comes with DVD and downloadable copies of the film.