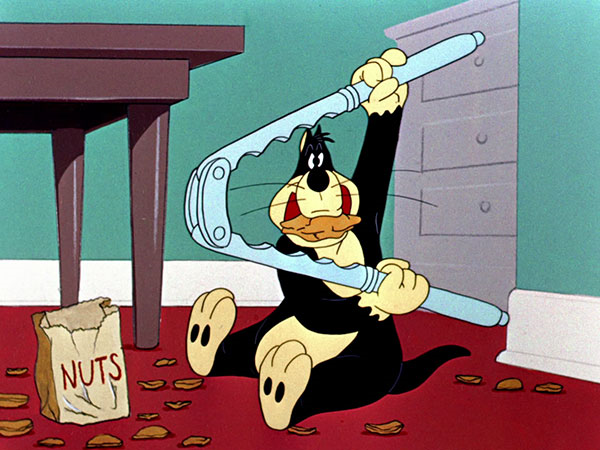 by Bill Chambers When Bob Clampett left Termite Terrace in 1946, his unit was assigned to Arthur Davis, who had years of experience behind him as the industry's first in-betweener (the person who draws the steps that get a pose from point A to point B) as well as a director in his own right, having helmed a number of cartoons for Screen Gems, where he worked closely with the great Frank Tashlin. (The two migrated to Warner Bros. together.) But Davis's name never became synonymous with Looney Tunes like so many of his colleagues' did, perhaps because his style is so unorthodox as to seem discontinuous with, even supplemental to, the studio's general output. Comparing Dough Ray Me-ow to the previously-reviewed Porky Chops also suggests that it's because Davis did better with characters denied immortality by their one-and-done status. Louie the Parrot and the gloriously stupid Heathcliff the Cat, who has to be reminded to breathe, are like Tweety and Sylvester reconfigured as Of Mice and Men's George and Lenny--a familiar-enough trope/dynamic, unconventionally applied to natural enemies and almost immediately upset by the intervention of a will that makes Louie next in line for a big inheritance in the event of poor, dumb Heathcliff's "disappearance." A clever running joke has Louie's fiendish murder plots inadvertently prevent Heathcliff from committing certain suicide, while the grand finale must be the ne plus ultra of dynamite-as-birthday-cake-candle gags, as the fuse stays lit for two whole minutes--a Hitchcockian eternity. Only the cynical button Davis and writer Lloyd Turner put on it feels rote; from its bulbous, anti-cute figures to its frequent dusting-off of the z-axis, Dough Ray Me-ow is a restless tweaking of the form that explains at once the brevity of Davis's stint as as a Warner director and his current cult reputation. Alternate Audio (Blu-ray/DVD): In a research-dense commentary, CARTOONRESEARCH.COM editor Jerry Beck credits specific animators with specific gestures, trainspots the musical references, and discusses the audition process by which Turner became a writer for Looney Tunes. Available on: Looney Tunes: Platinum Collection, Volume Two [Blu-ray]