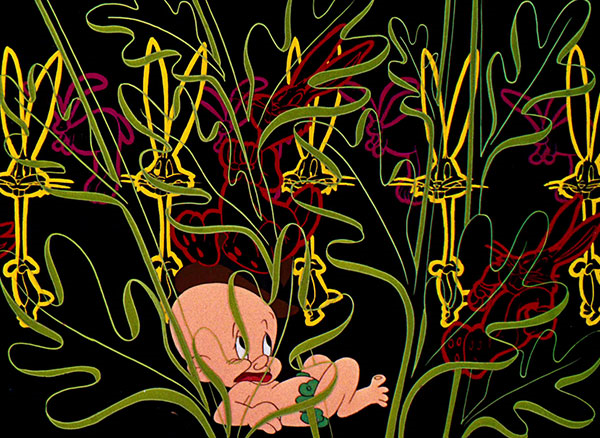 by Bill Chambers Given Bob Clampett's less-than-amicable departure from Warner Bros., not only is his final cartoon for the studio, The Big Snooze, a particularly loaded one, it also suggests a key influence on the evolution of Freddy Krueger's mythology. When Elmer Fudd tires of Bugs Bunny repeatedly steering him off the edge of a cliff in a cartoon-within-this-cartoon, he tears up his contract with Jack Warner and dances on the confetti. The delicate ecology of Looney Tunes thus upset (what is the hunted without a hunter?), Bugs disrupts Elmer's life of retirement by coating his pleasant dreams with "nightmare paint," alerting Elmer to the fact that there's no free will in cartoon purgatory. Clampett's reputation has taken a hit in recent years thanks to rumours of credit-glomming (ironically, he would not receive any billing here), and one can understand his colleagues' frustration that he didn't seem to be adapting to the evolving house style. Indeed, The Big Snooze looks defiantly "old-fashioned" next to other Bugs Bunny shorts released the same year, such as Chuck Jones's Hair-Raising Hare or Friz Freleng's Baseball Bugs; the characters are cherubic, the scenery painterly. Still, it's a crowning achievement that showcases every unique touch Clampett brought to Looney Tunes/Merrie Melodies, including his genius for puns ("Sleeping Pills: Take Dese and Doze"), his Dali-esque flights of surrealism, and the cheeky, unpredictable way he makes rubble of the fourth wall. And it ends with Bugs declaring his love for Elmer in an oddly tender fashion--Clampett was one of the few artists to invest their dynamic with real history, time and again. Alternate Audio (Blu-ray/DVD): The late Bill Melendez provides vivid descriptions of the working conditions at "Termite Terrace," having actually been employed there prior to overseeing the animated incarnations of "Peanuts" and "Garfield". Unfortunately, all he says about The Big Snooze is that it's pure Clampett. Available on: Looney Tunes: Platinum Collection, Volume Three [Blu-ray]