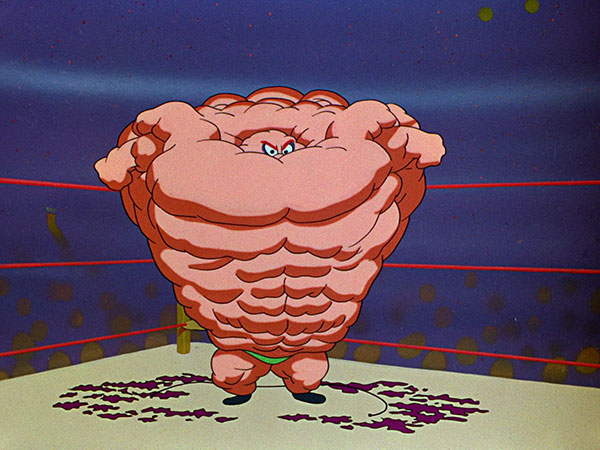 by Bill Chambers Rabbit Punch's simian pugilist "Battling McGook" returns in Bunny Hugged as wrestler "The Crusher," such a fearsome opponent in the ring that his challenger--Gorgeous George parody "Ravishing Ronald," who's introduced with a bang on the J. Arthur Rank gong (suggesting a subtext of British politesse vs. American might) and hilariously announced as "a denatured boy"--is rolled out on a platter. When the Crusher uses RR's hairnet to turn him into a human punching bag, mascot Bugs Bunny ("It's a living") takes matters into his own hands. The prototype for a certain pyramid-shaped beefcake in which director Chuck Jones specialized, the Crusher is unique among Bugs's antagonists in that he serves as some kind of Toon reckoning, completely pulverizing Ravishing Ronald, who holds up sad little "S.O.S." signs, and violating the first rule of Bugs Bunny cartoons, which is that the house always wins. Bugs ultimately triumphs, natch, but the outcome looks bleak until he stops trying to outmuscle the Crusher and turns theirs into a battle of wits. While the violence in Bunny Hugged is mildly traumatizing, perhaps giving it the potential to turn children off the supposedly imitable behaviour of Golden Age slapstick, the enduring appeal of this one is that it's Revenge of the Nerd. (The image of Bugs proudly flexing a drooping arm seems almost pandering these days.) Dynamic character poses throughout. Alternate Audio (Blu-ray/DVD): Sound effects and Carl Stalling's score are isolated on a second track. Available on: Looney Tunes: Platinum Collection, Volume Three [Blu-ray]