Vengeance is Mine (1979) [The Criterion Collection] - Blu-ray Disc 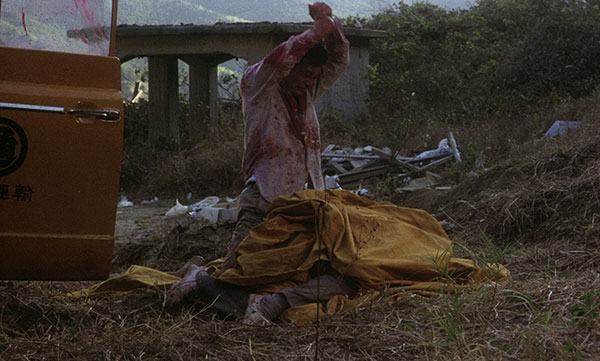 ***½/**** Image A Sound B+ Extras A
starring Ken Ogata, Mayumi Ogawa, Mitsuko Baisho, Frankie Sakai
screenplay by Masaru Baba, based on the novel by Ryuzo Saki
directed by Shohei Imamura

by Walter Chaw It would be tempting to say that nature is appalled by all the terrible things Iwao Enokizu (Ken Ogata) does. Just after Enokizu hammers an old man to death in a garden and takes his stuff, Nature erupts in a windstorm--furious witness, it seems: a tempest as analogy for the rough gales driving the mysterious tides of this murderer's soul. Yet Shohei Imamura has something else entirely on his mind. Vengeance is Mine is about the fallacy of a moral universe. It's not that it believes there's no reason for atrocity; rather, it believes there's no definition for atrocity. Imamura is the spiritual brother of guys like Werner Herzog and Terrence Malick. The questions he asks aren't about ethics and morality, they're about all the ways that men lie to themselves about being bound by ethics and morality, only to transgress those boundaries they create, whether they be bans on religion, law, or philosophy. They're not evil. They can't help it. No one can.

Enokizu is a serial murderer the way that Henry of Henry: Portrait of a Serial Killer is a serial murderer. There's nothing romantic about it. He's not a genius. He's depressingly average, as underscored by his middle-class businessman's attire. He reminds in many ways of the barber hero of Imamura's own The Eel: utterly ordinary schlubs, their ordinariness a shield of sorts against the yawning abyss beneath the surface. Midway through, we see Enokizu squatting in the flat of one of his victims when the wardrobe where he's stashed a corpse swings open. He sprays something on it to kill the smell and tapes the door shut. Imamura rode the vanguard of the Japanese New Wave and did so in what appears on the surface to be wilful, aggressive rebellion against mentor Yasujiro Ozu. Where Ozu favoured "pillow shots," the only poetry in Imamura is the inferred poetry of "Natural" man. He's the epitome of what I think of when I hear the term "New Wave": he's the Godard, the Fassbinder of the movement, the one declaring that the only truth is in the unadorned ugliness of the things we try hardest to deny. In that pursuit, every relationship in Vengeance is Mine is venal and base.

Imamura presents traditional relationships (and is there a more loaded concept than the idea of Asian tradition?)--between stoic father and doting daughter-in-law, for instance--as ones based, like every human relationship, on some symmetry of violence and sex. The centrepiece sequence sees Enokizu's reluctant, arranged bride Kazuko (Mitsuko Baisho) taking a bath in a hot spring with Enokizu's father, Shizuo (Rentaro Mikuni). They're attracted to each other, that much is clear, and earlier intimations that Enokizu's mother hates her daughter-in-law suddenly take on resonance. There's also a bit where Kazuko kills a dog with boiling water. Lost in Imamura's invisible style is a sneaky formalism. If we accept the premise that Vengeance is Mine is about a liebestraum of sex and death, then framing two scenes around steam and hot water is a fascinating mechanism, one that speaks simultaneously to Imamura's opinion of the status of women in Japan circa 1979. The easy read is that this is an artist at war with the conventions of his society. Imamura, a variously-ascribed genius and provocateur, is slipperier than that.

Look at how he tells Vengeance is Mine: as a series of flashbacks to key moments in Enokizu's career as a broken thing, con artist, and killer. But they're not key moments, they're just moment-moments. It's an aggregate that does nothing to explain the whole, nor could any fragments ever adequately shore up any ruins. The title refers to Enokizu's family's Catholicism (Robert DeNiro has the passage tattooed on his forearm in Scorsese's Cape Fear), but moreover it refers to the absolute uselessness of any kind of religion in explaining, much less controlling, human behaviour. There's a scene in which a young Enokizu witnesses his father's humiliation, and it highlights how Freud is probably only useful in explanations, not solutions. Vengeance is Mine is a quintessentially Modernist film with Modernist themes, comparing well with Virginia Woolf and T.S. Eliot, in particular.

Later, Enokizu, masquerading as a college professor in a guise of normalcy that's easy and comfortable, finds acceptance with a prostitute and her mother, and were Vengeance is Mine interested in platitudes, it would let it be. The picture is based on a true story, one tailor-made for Imamura's worldview. It isn't brutal, it just is. It makes no attempts at explanation or apology; it offers no hope, nor does it attempt to gild the topic of depravity with either romantic celebration or condemnation. Returning after a ten-year hiatus from fiction filmmaking, Imamura essentially created another diary of the sad mendacity of the world. Vengeance is Mine is a tough movie to watch--almost sadistic in the way of Haneke, or Pasolini, perhaps. With its violent rape (Imamura, in his immense perversity, actually casts Enokizu as the hero in one especially difficult scene) and bloodletting, what's most surprising are its instances of wry humour. In a way, if we're tracking influences, Imamura probably had a little impact on the Coen Brothers' misanthropic masterpieces. 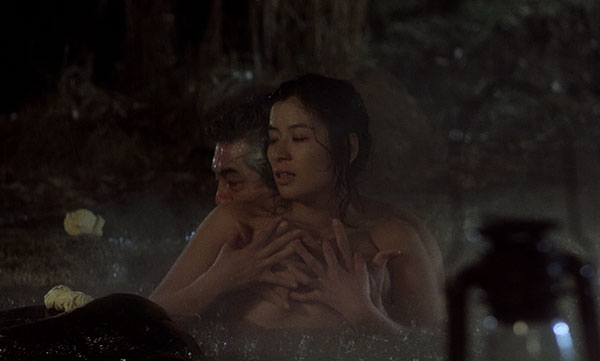 THE BLU-RAY DISC
Vengeance is Mine debuts on Criterion Blu-ray in a 1.66:1, 1080p transfer sourced from what the booklet describes as a "new 35mm low-contrast print made from the original camera negative." Despite this, the image has Criterion's usual deep blacks along with whites that sometimes bloom in that charming Seventies way, complementing an unmistakably faithful palette defined but not necessarily dominated by the decade's earthy browns. Untouched by any obvious edge-enhancement or DVNR, fine detail is excellent beneath a rarely-coarse layer of film grain. Compression is flawless: The legendary final scene, where Enokizu's bones hang in the air in a vitriolic tribute to Kubrick's "Dawn of Man" sequence from 2001 (progress? Evolution? Please), allows every bit of bone dust its own pixel. The accompanying Japanese audio, presented in uncompressed centre-channel mono, is low-key by design but crisp and clean.

A 10-minute interview segment from 1999 with Imamura and two sometime-collaborators, sound man Kenichi Benitani and producer Kunio Takeshige, finds the auteur chain-smoking and absolutely calm and peaceful, in direct contrast to the product of his hand. He touches on the fascination of the film for him and tells a little of his process. More informative is a feature-length commentary from critic/scholar Tony Rayns, who does yeoman's work here, going into great detail on Imamura's career while offering deep reads of Vengeance is Mine both scene-specific and otherwise. He goes so far as to trainspot each time Enokizu's mother appears on screen in order to make the larger point about where she is in the picture's hierarchy of women. It's a beautiful look at how academics think, as well as how this conversation with art should be conceived and conducted. It's smart and entertaining and I'm glad I didn't listen to it before writing the bulk of this review. Vengeance is Mine's teaser and theatrical trailers, in 1080p, round out the disc-based extras.

Michael Atkinson provides the Criterion liner-notes essay, "Civilization and Its Discontents," and it's a doozy. I've long admired Atkinson, and this piece manages to be informative and furious at the same time. Great, living prose, covering Imamura's career in brief before offering a cogent social analysis of the picture in question. It's sandwiched in the booklet between personal testimonials from Imamura on what he feels this movie is about ("I think I can see the forlorn inner soul of today's man"), a longform interview with the director that's pretty definitive and a must for the Imamura fan ("Women generally outlive men, which means that, among other things, they're stronger than men"), and finally a bit of a filmmaking manifesto from Imamura ("...rare, bizarre angles, rapidly date. For that reason, such methods should be avoided."). The last page of this insert features a haunting map of Japan that tracks Enokizu's flight from the law. 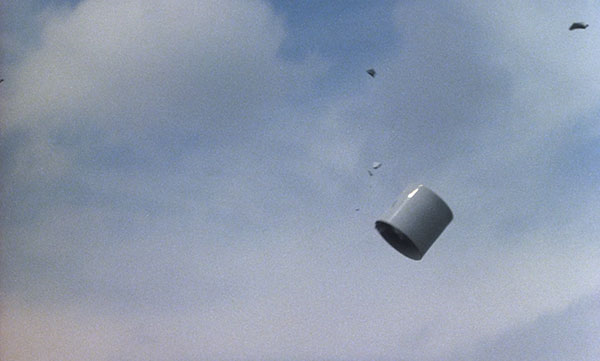