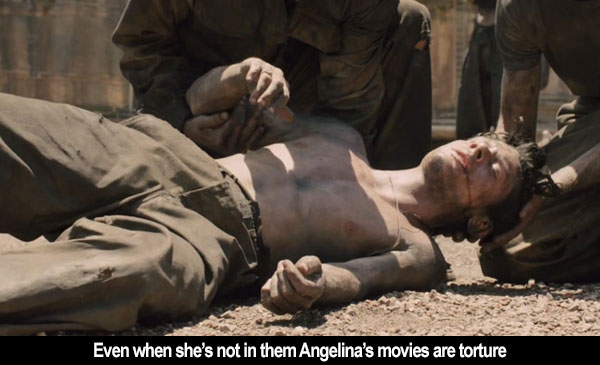 by Walter Chaw I genuinely believe that Angelina Jolie means well. She's like the distaff Sean Penn. Unlike Sean Penn, she probably shouldn't direct more movies. Jolie does her research by going to the places she makes movies about. She cares. She adopts children from those places. She takes embarrassing publicity photos with her subjects, sometimes, that indicate not malicious self-promotion, but rather an unaffected, Costner-esque surprise and wonder. She's growing in her morality before our very eyes, and it's great, but her second time up to the plate, Unbroken, is naive and simpering. The only thing remotely interesting about it is that its subject, Olympic athlete and WWII POW Louis Zamperini (Jack O'Connell), after getting tortured by the Japanese for a while, decided post-war to embrace Billy Graham and forgive his torturers. That bit, the interesting bit, is left to a few lengthy end-title cards. It's sort of like reading the Old Testament and calling it good and, um, wanting to post the Ten Commandments in schools instead of the Sermon on the Mount. Never mind.

O'Connell is going to be a star. This film could make him one. His performances in Starred Up and ‘71 are remarkable, visceral things. If there's an heir to Tom Hardy's meteoric rise, it's O'Connell. He's pretty much the only good thing in Unbroken, and I say that even after I watched that part where he gets PG-13 punched in the face by every single person in his prison camp. It's but one torture of many devised by a particularly inventive tormentor, Mitsushiro Watanabe (Takamasa Ishihara). See, this is one of those films in which a guy gets tortured horribly but refuses to crumble. He's superhuman that way. His tormentors, on the other hand, are inhuman monsters. A scene where Tokyo is firebombed, devastating a civilian population that Unbroken has just shown to be urbane and entirely undeserving of sudden annihilation, should land with some kind of emotional weight that doesn't include bloodlust. You really want the dirty Japs to get theirs, is what I'm saying, and the final rimshot of Watanabe refusing Zamperini's Christian grace just goes to show how godless those yellow heathens truly are.

Unbroken does the opposite, in other words, of what Zamperini's life represents in creating a remorseless villain trying to destroy a lily-pure hero. It's essentially a 1940s propaganda flick, an act of torture porn not entirely unlike Mel Gibson's The Passion of the Christ, and it should, consequently, appeal to exactly the same audience. There's no nuance. When Louis's plane gets shot down and he and his mates try to survive on a diet of seagulls and sharks, there's a scene where a Japanese plane spots and strafes them, right before they get fished out of the frying pan into the Bridge on the River Kwai fire. There's no question about whether or not Louis should succumb to his torture and, I don't know, die or something. There's no question that the Japanese are wrong to treat their prisoners this poorly. There's no question that Louis will be emancipated when the good guys kill about a hundred thousand families in one day. There's no question there will be a tearful reunion on a tarmac with a perfectly-crafted ethnic family (save O'Connell, who's as Italian as I am), and no question as to who the good guys are and are not.

Unbroken is listless, toothless, and, worst, meaningless. It loves its abuse but won't show it; it's a hagiography in love with creating this martyr, but robs him his rebirth. He's tough, I get that without the childhood flashback to little Louis finding his calling as a long-distance runner legendary for his strong finishes. Ironic, then, that the film of his life deprives him of his life's strong finish. Imagine the movie that talks about Christianity in terms of love rather than torture. It's the one that inspires an entire reconsideration of our actions rather than one that feeds into our bellicosity and xenophobia. I was reminded throughout of Sen. John McCain's speech about the angels of our better nature upon the release of the report on the CIA's torture program, of how much I admire McCain sometimes--the one who torpedoed his own presidential run that day when he corrected a woman who called his adversary an Arab like it was an epithet. There's grace there. It's a constant fascination to me when I'm confronted with Christians who live life in the imitation of Christ; the same fascination I provide to my Christian friends, I think. I hope. The sad fact of it is that even in definitely well-intended films like Unbroken, the lingering impulse is to take sides and wish violence upon others. I like to think that that couldn't have been the intention.