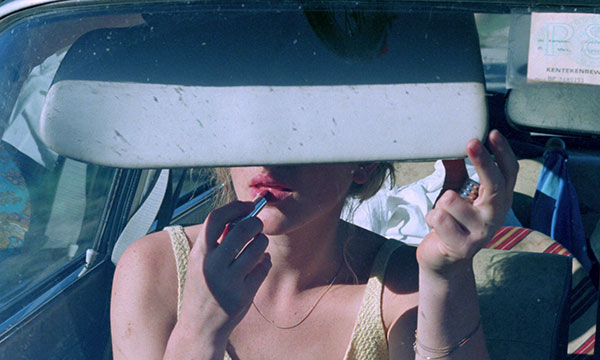 by Bryant Frazer What scares you the most? If you chew on that question for a while, then imagine a narrative that gets you to that terrible place, your story might look a little like the one told by The Vanishing (Spoorloos). Completed in 1988, this downbeat thriller didn't reach the U.S. until a couple of years later, when it coincidentally landed in New York within weeks of The Silence of the Lambs. The Vanishing isn't, strictly speaking, a serial-killer movie like Silence, though it shares that film's deep interest in the psychopathology of its villain. Like a good (and by "good," I mean "lurid") true-crime book, its interest is similarly piqued by the painful, quotidian details of an abhorrent crime.

The Vanishing begins with a young Dutch couple, Rex (Gene Bervoets) and Saskia (Johanna ter Steege), on vacation in France. As they drive, they play word games, bicker about whether the tank needs to be filled, and talk about dreams. They stop at a gas station for rest and refreshments and then--after a bare 15 minutes of screentime--she's gone. Gone as in vanished, as if into thin air, after stepping inside to buy some soft drinks. Just when you think the film has little to do but settle comfortably into a kind of detective story, with Rex gathering clues that put him on the trail of Saskia's abductor, it switches gears completely and reveals the perpetrator as comfortable family man Raymond Lemorne (Bernard-Pierre Donnadieu). In an extended flashback, Raymond hatches and rehearses his plan for kidnapping a woman, tracking the expected travelling time for a comfortably chloroformed victim, measuring his pulse rate under stress, and trying out incapacitating moves on his own daughter. After a sudden, multi-year flash-forward, the picture spends the balance of its running time moving back and forth between parallel non-linear narratives, from Rex to Raymond and back again, before bringing them together for a perverse, low-key pas de deux that moves the film towards its inexorable conclusion.

The Vanishing subverts the expected narrative mode of the whodunit by turning its attention to Saskia's abductor before said abduction even takes place. Raymond is introduced as a serious-looking but anonymous fellow driving a late-model family car and affixing a fake cast to his right arm--a small thing, but clearly nefarious in context. More details are filled in. Raymond teaches chemistry. He once dove into cold water to save a little girl from drowning. He has a wife and two children and a country chateau far enough from the neighbours that he's sure they can't hear the screaming. Is he sympathetic? Well, nobody looks at his professorial demeanour, calculating mindset, and overgrown shrub of chin hair and thinks: psycho killer, c'est moi. But he's credible. His life is quiet and comfortable enough that you can imagine his bourgeois lifestyle generating the sort of privileged ennui that gives wings to his demons. The film goes to great lengths (maybe too great) to posit the pretzel logic that could lead a demented yet thoughtful man to commit heinous crimes.

In a clever reversal, Rex is clearly the more unhinged of the two. Obsessed with Saskia's disappearance, he's still plastering the city of Nîmes with "Have you seen this woman?" posters years later. He has a new girlfriend, Lieneke (Gwen Eckhaus), who seems lovely, but she's alienated by his behaviour, insisting at one point that she has no interest in being part of a ménage a trois. (On a repeat viewing it becomes clear the third party is Raymond, not poor Saskia.) He has ample reason to feel guilty: On the day Saskia disappeared, the car had run out of gasoline on his watch, and he had abandoned her at a dangerous spot in a dark tunnel, ignoring her cries for his return. It's a failure of character from which he never recovers. His betrayal revealed his great egotism; it's not grief that drives him later as much as a desire for knowledge that overrides his concern for his own safety. He must know, he declares, what happened to Saskia Wagter. And, from a safe distance, Raymond Lemorne is watching him.

Donnadieu invests Lemorne with just the right amount of awkwardness--his demeanour is generally confident and charismatic, but his facial expressions are often pinched and there is sometimes a bit of tightness around the shoulders that, along with a stuffy, reserved posture, hints at his creepy inner world. (Check out the final shot, in which he musters a glaring intensity to rival the closing images of Psycho and Taxi Driver.) Raven-haired Bervoets is less convincing as the dickish young loverboy of the picture's first act than he is as the smouldering bag of emotional wreckage of its latter half, when he makes a perfect id to Raymond's ego. Bervoets's somewhat off-putting screen presence helps ter Steege steal the show with a bright, naturalistic performance that adds resonance to the tragedy. Georges Sluizer directs it all with classical precision, framing shots in the best way to propel the narrative and showcase performance, never venturing a style that could draw attention to itself. When telling Rex's story, he stays close to the character, favouring tracking shots that move alongside him and, especially, Dardennes-style follow shots that emphasize his subjective experience in relation to the vast, empty and unfriendly environments he faces. Raymond is more likely to be seen from a medium distance, in compositions with a bit of a surveillance quality to them; you feel that the camera is keeping its distance from a dangerous man, and the wider vantage is best for revealing body language as he plans, rehearses, and executes his crime.

Still, despite being perhaps the best-known Dutch film export not directed by Paul Verhoeven, The Vanishing is utterly ordinary in appearance. Anything but a stylist, Sluizer is the definition of a cinematic one-hit wonder; the only other movie of his to stir up much interest was his own Hollywood remake of The Vanishing, which cast Kiefer Sutherland, Jeff Bridges, and Sandra Bullock and was ridiculed as a disaster. (It gained nothing from a rewritten ending, nor did it benefit from its star power.) But Sluizer was an accomplished documentarian in the 1960s and 1970s, having gotten his start making industrial films for Shell, and it's his methodical, journalistic approach to novelist Tim Krabbé's scenario that makes The Vanishing such a compelling investigation. It's disturbing in part because its lack of affect reflects the emotionless remove of its antagonist.

That banality-of-evil stuff only gets you so far, though. What's really distressing about The Vanishing is the film's climax, with the emotional voyeurism it invites. It induces a genuine, shivery thrill at the prospect of a horrific event imagined three times over--the hero's appreciation of his predicament is eclipsed only by his horror at his lover's ordeal, and both of those theoretical atrocities are overshadowed in the mind of the viewer, who is surely imagining how it would feel to actually live through what's depicted on screen. The spectre expands in the mind as if reflected in a pair of facing mirrors. And there's something unsavoury about simply being a viewer who makes it all the way to the end-credits scroll, having consumed so much abject horror as an evening's entertainment. (Somewhere, Michael Haneke was taking notes.) The experience shames the viewer as much as it fascinates. In that tension, The Vanishing reaches full flower. 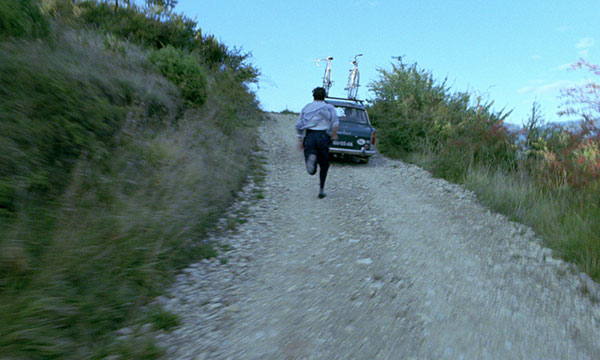 THE BLU-RAY DISC
Criterion certainly seems a little bashful about The Vanishing, releasing it in a handsome but unusually slender new Blu-ray edition. According to the liner notes, this 1.67:1, 1080p transfer was sourced from a 4K scan that took place in Italy, with colour dialled in by Criterion's technical mastermind, Lee Kline, in New York. The results are a big step up from the company's previous DVD release and appear to have wrangled every last bit of visible detail from the camera negative. The picture is generally grain-free in brightly-lit exteriors, although the grain structure of the film stock is apparent in darker scenes. Shadow detail is good and colours are richly saturated, even in scenes late in the game where the movie's palette is deliberately subdued. The image is mostly (but not entirely) clean of dust, dirt, and scratches Criterion says were removed using a combination of manual and automatic or semi-automatic tools, while the transfer has been generously budgeted at an average video bit rate of just over 35 Mbps, ensuring that any digital artifacts are indiscernible. Perhaps the biggest qualitative difference from the earlier version is the colour timing, which now tends towards the warm side of the spectrum during scenes featuring Rex and turns a bit chilly whenever Raymond is on screen. The included uncompressed PCM monaural audio is similarly exemplary, presenting an exceptionally clean and clear representation of the original 35mm magnetic audio track. Criterion reports that imperfections were manually removed during a 24-bit remastering process.

There was plenty of room for picture and sound on the dual-layer disc because extras are sparse by Criterion standards. Still, the 19-minute HD interview with George Sluizer recorded earlier this year is an particularly precious thing, since the director died in September, mere weeks before this title hit the streets. He discusses adapting the source material, Tim Krabbé's novel The Golden Egg (Sluizer apparently butted heads with Krabbé over his preferred cinematic approach), as well as the casting process, including bringing a difficult Donnadieu to heel. He also remembers speaking at length with Stanley Kubrick, who he says was the film's biggest fan, and reveals that the English-language title was in part a homage to Kubrick's The Shining. In a new 14-minute interview (HD), ter Steege herself remembers auditioning for The Vanishing as a third-year theatre student and describes the challenge of crafting a performance that only gets about 11 minutes of screen time. She, too, recalls her problems with Donnadieu, who didn't trust her performance and treated her poorly because of it until Sluizer intervened. (No one else associated with the production is represented here; an interview with Krabbé would have been especially welcome.) An essay by Scott Foundas takes up one half of a four-panel insert, a fresh take on the jacket art plus three pages of liner notes occupying the opposite side. 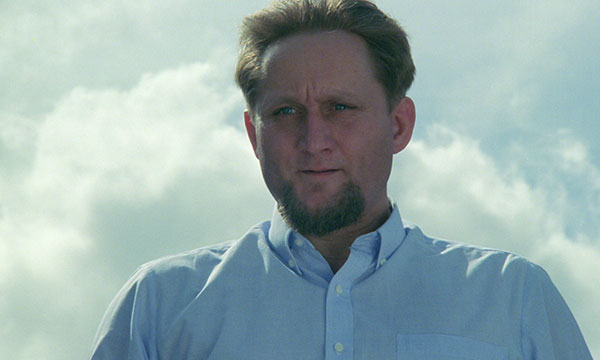