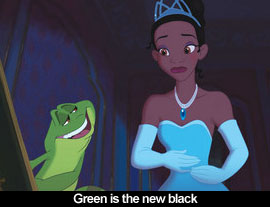 by Ian Pugh Disney has resurrected its traditional (i.e., 2-D) animation department only to plunder plots and themes from its own vault, but because we're all familiar with what Disney represents in this day and age, we're meant to accept it with a wink and a nod. This is the same old Cinderella trope located firmly within the "Family Guy" generation, the film's hip acknowledgment of genre conventions (the absurdity of talking animals, the modern irrelevance of royalty) nevertheless failing to capitalize on that newfound consciousness in any meaningful way. So while it offers the reasonable assertion that the importance of love and family shouldn't be lost in the pursuit of a dream, it still ends with a message of no-happiness-without-marriage straight outta the 16th century. And whatever PR folderol you've read about The Princess and the Frog representing the company's "first black princess," be aware that Bold Leaps Forward are hardly the priority here, the common but wholly-valid criticism being that the characters spend more screentime as frogs than as people.

That said, it is ultimately a film about a young black woman, Tiana (voice of Anika Noni Rose), with ambitions of opening a restaurant in postwar New Orleans, and it's not entirely fair to call The Princess and the Frog outright oblivious to racial concerns: a snide comment on the opportunities for a woman of her "background" is enough to plant a seed of doubt in its superficial landscape of harmony. But what's the point if the hardworking stiff ends up marrying the prodigal prince she met two days ago, initially forgetting her mother (Oprah Winfrey) in the equation of what's really important? Like its weekend competitor Invictus, anything "inspiring" or "groundbreaking" about The Princess and the Frog's approach to race is basically defeated by its adherence to formula. It would be easier to accept the intentionality of its politics if every single frame didn't feel prepped for a seamless integration into Disney's line of "Princess" merchandise, or the next "Kingdom Hearts" game.

The worst thing is that The Princess and the Frog is content to rush through its own script--knowing that the premise is all smoke and mirrors, most of the dialogue is transparently impatient for the next Randy Newman showstopper to begin. The film doesn't wait long, then, until evil hoodoo man Dr. Facilier* (Keith David) transforms the visiting Prince Naveen of Maldonia (Bruno Campos) into a frog, and soon thereafter Naveen has kissed Tiana and turned her into a frog. Before you know it, they've teamed up with a trumpet-playing croc (Michael-Leon Wooley) and a Cajun-hick firefly (Jim Cummings), the latter of whom is given the most dramatic send-off of any joke character in the Disney pantheon. The Princess and the Frog is best described as a procession, with every idea treated like a parade float, immediately forgotten as soon as it's out of view. That mentality eventually culminates in yet another pitiful attempt on Disney's part to imitate the golden years of "Looney Tunes". Entire characters and sequences are introduced for the sole purpose of slapstick, yet the whole film is so dedicated to maintaining a sense of pleasantness that it can only flounder when the time comes to entertain. Contrary to its ass-backwards messages and cynical marketing strategies, The Princess and the Frog isn't nearly memorable enough to do much long-lasting damage. It doesn't actively lower your I.Q. like Planet 51 and it's nowhere as poisonous as New Moon--but it's movies like this that make the wait for the next Pixar effort feel like an eternity. Originally published: December 11, 2009.

*Facilier is, not incidentally, the easiest metaphor for The Princess and the Frog's M.O. of Disney self-reference and its unwillingness to indulge in obvious racial themes. He's given a sentient shadow seemingly lifted from Tim Burton's stop-motion efforts, but his appearance and air of mystery mostly remind of Geoffrey Holder's Baron Samedi--making this the second kids' film, after Shrek the Third, to invoke "The Frog Prince" and Live and Let Die in the same breath. return