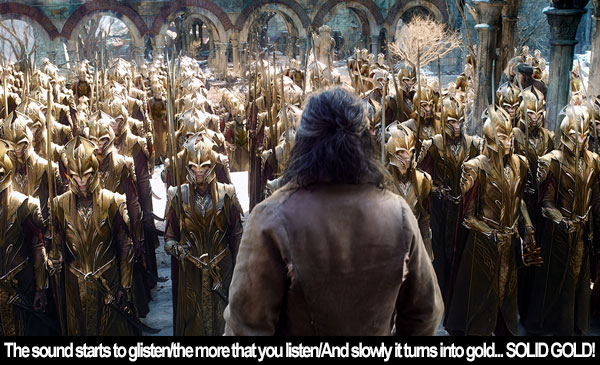 by Walter Chaw During the first ten minutes of the first day of Peter Jackson's The Hobbit: The Battle of the Five Armies (hereafter Hobbit 3), Smaug dies. I don't intend this to be a spoiler, because, you know, the book's been around for almost as long as this movie runs, and Rankin & Bass already adapted it (somehow squeezing Tolkien's slim volume into one 77-minute animated flick)--but if you don't read and live under a rock: the dragon dies. This acts as prologue. A better prologue would recap what the hell happened in the first two Hobbits; I appear to have scrubbed them completely from the ol' memory bank in a heroic act of self-defense. This prologue, by the way, is the key moment in the book, meaning that although the CGI fireworks never let up, the rest of Hobbit 3 is the decline in action to the conclusion.

Bilbo (Martin Freeman, great) is the lone hobbit amongst thirteen dwarves who've discovered a giant horde of gold in an old, abandoned dwarf kingdom/cave/mine shaft. Not content with limitless wealth, Dwarf king Thorin Oakenshield (Richard Armitage) becomes obsessed--er, dragonsick--with finding the Arkenstone (no relation to David). In other words, he turns into a real dick. Then Gandalf is in a cage and Galadriel (Cate Blanchett) and Elron (Hugo Weaving) and Saruman (Christopher Lee) show up to fight stuff and the whole thing turns into some weird drag show for a minute. Then elves come--led by an Elf on an elk (Lee Pace) who is also a real dick--to help the humans--led by Bard (Luke Evans)--to do I don't know what, though I believe it involves something from Jared Jewelers. Then Billy Connolly shows up as himself riding a pig. Then The Fellowship of the Ring starts.

I think that's about it. I haven't mentioned the execrable dialogue, which sounds suspiciously like James Cameron's attempts at English. The larger point being that during the cycle of forcing myth, eventually the strain starts to show in lines like, "But why does it hurt SO MUCH?" as emoted in physical contractions by the emotion-doesn't-come-naturally-to-her Evangeline Lilly, playing a banished elf lady in love with the one dwarf who doesn't look like a filthy miniature hipster lumberjack. Lilly's Tauriel forms one point of a love triangle opposite noble, motion-smoothed elf Legolas (Orlando Bloom), who, already a deeply-distracting special effect, has his distracting-ness magnified by the digital seams around the edges of his contact lenses. Maybe they're made out of mithril. It's sloppy, in other words. For all the bloat, there's nothing like character development or a story arc here--not even pathos in the murder of cool helper-animals. Nor is the picture aided by what appears to be wry self-awareness of how opportune it is that giant fucking eagles materialize whenever there's a machina that needs deus-ing.

The film is apparently not, however, aware of how convenient it is that Bard has a trio of adorable children in constant peril, or of how Tauriel is a total badass except when the opposite is more dramatically viable. Yeah, it's horrendous. I don't mean to suggest that Hobbit 3 is political in any way, just that it feels very much like everyone involved lost interest, decided to throw a few Christians to the lions, and call it a day. There are a couple of kinetic bits that would have seemed amazing eleven years ago, but there's a limit to how many slow-motion walks scored to angelic choirs that any constitution should be forced to endure. The moment Thorin finally decides to stop being a dick, in the middle of a battle where all his friends are getting slaughtered, is so protracted and grandiose that it's actually intensely irritating rather than, as I think was probably intended, suspenseful. Or inspirational. I frankly don't know what Jackson was going for. Again, what he achieves is irritation. The Hobbit 3 is a bad movie left to die by an exhausted filmmaker. I'm right there with you, Pete.