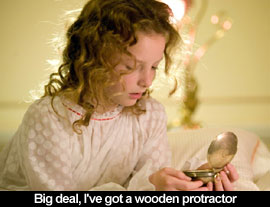 by Walter Chaw The newest entry in the "what the fuck" hall of fame is Chris Weitz's deplorable, dull, nonsensical, unwatchable The Golden Compass, which comes packed to the gills with meaningless terms, arcane concepts, stupid names, and a narrative patchwork that plays like a game of "make-up" improvised by a hyperactive child. Arriving on a wave of controversy as right-wing hard-ons decry its anti-Christian tendencies (where were they for Beowulf?), the picture's full-on attack on good taste and coherent filmmaking are what they really should be protesting. Adherents will thrill, I suppose, although I doubt that atheists are as natively stupid as born-agains--but without a good working knowledge of the Pullman books upon which the film is based, I can't imagine anyone having a chance with this stuff. Impenetrable ain't the least of it. Weitz is completely outmatched by the material, trying too hard to cram all the gobbledygook about daemons and dust and witches and armoured bears he possibly can into every crevice available between the CGI sequences while leaving out huge, gaping expanses of necessary exposition in the process. If this wasn't bad enough, consider the sequence that begins with a 900 lb. polar bear wisely suggesting that a thin ice shelf can't support both his weight and that of his 80 lb. rider (sage, indeed)--thus necessitating their splitting up--and ends with said 900 lb. bear materializing out of nowhere to somehow surprise a bad guy from the front. Even with full knowledge of the Pullman books, the way the movie's put together is plodding, non-sequitous, inept.

Lyra (Dakota Blue Richards) is a little girl who can read the titular compass, which has a long nonsense appellation and purports to function as some sort of soothsaying device. Her secret father is Lord Asriel (Daniel Craig) and her secret mother is the evil Mrs. Coulter (Nicole Kidman, looking just amazing as a mannequin in a series of perfectly-tailored gold suits), though we're somehow not supposed to know that until the film is almost over. Because her golden compass is the last such thing in this world, Lyra is promptly given it and then proceeds to tell everyone she meets about it, leave it by itself, and use it in public where people like pilot Lee Scoresby (Sam Elliott) can spot it. It's all good, thankfully, because even while she spends a significant amount of time unconscious and in the bad guys' clutches, no one thinks to take it from her. Because everyone in this universe has external souls called "daemons" (animal familiars by any other name), there's hardly a frame in the film that isn't digitally enhanced and hardly a moment where the little minx hides underneath tables or in closets where I didn't wonder why someone's leopard or bloodhound daemon hadn't sniffed her out. The worst crime of a film like The Golden Compass is that not only is it retarded, it expects its audience to be retarded as well. Lyra befriends disgraced polar bear Iorek Byrnison (Ian McKellen), whose mortal battle with bear king Ragnar Sturlusson (Ian McShane) serves as the central narrative climax and begs the question of why the freshly-crowned bear king Iorek doesn't get his ursine pals to come along for the destruction of the bad guy's arctic lab. There's also shit about Gobblers or something and missing children and separating children from their daemons that makes not a lick of sense and so doesn't cause anyone to care one way or another.

Hovering over everything is this atheist charge that's lost almost all of its balls in the translation. The evil church and its dedication to preventing "free will" and la de da is practically neutered of Christian relevance, and so The Golden Compass isn't about anything whatsoever in as boring, uninspired, and inscrutable a way as possible. It's the movie Stardust could have been: terrible. There's a considerable backlash in popular culture against evangelicals and the real damage they've done to the United States--broad and wide enough that the inevitable fallout includes movies like this that damage the left-wing cause exactly like Lions for Lambs damages the left-wing cause. It's hard to express exactly how bad this movie is, how rushed it feels, how compromised and timid it is. In a picture about the evils of a theocracy, there's never really a cogent explanation of why every culture in the piece is governed by a monarchy--which is God-bestowed...isn't it? (Maybe it's the kind of "democratically-elected" monarchy favoured by George Lucas?) The point, if there is one, is lost--the film ends on a cliffhanger note for a sequel no one in their right mind is anticipating--and as launching pads for franchises go, it's Remo Williams all over again. In the current climate, however, it's destined to fulfill the maxim that only movies this bad earn that much money. As with The Da Vinci Code before it, the controversy surrounding it is destined to turn it into a hit, and when push comes to shove, I guess I like what that says about our society. A pity that The Golden Compass--again like The Da Vinci Code--is such an embarrassing, colossal piece of crap. Originally published: December 7, 2007.