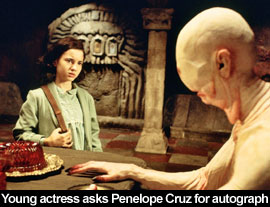 by Walter Chaw Brutal and ignoble, the antithesis of romantic, the violence in Guillermo del Toro's Pan's Labyrinth slaps metal against flesh like the flat of a hand against a steel table. It's the only element of the picture that isn't lush, that isn't laden with the burnished archetype of Catholic superstition as it exists in eternal suspension with the pagan mythologies it cannibalized. By itself, this seems a metaphor for the pain and the magic of how fable turns the inevitability of coming-of-age into ritual. An early scene where hero girl Ofelia (Ivana Baquero)--a storyteller equal parts experientially innocent and allegorically savvy, making her the manifestation of del Toro's ideal avatar--tells her prenatal brother a story about a rose that blooms nightly on a mountain of thorns touches in one ineffably graceful movement all the picture's themes of immortality, aspiration, isolation, and the promise of escape held, sadistically, just out of reach. There's something of the myth of Tantalus in Ofelia's tale, as much as there is of Lewis Carroll's Alice and the sagas of parental absence by the Brothers Grimm, which surface in the premise of a young girl traveling, as the film opens, with her pregnant mother into the war-torn Spanish countryside during Franco's rule to join her wicked stepfather Captain Vidal (Sergi López) at his remote outpost. Ofelia will be reminded repeatedly throughout the film that there's no such thing as justice or innocence left in the world, and that the best intentions are crushed by cynicism and rage. The question left as the picture closes has to do with whether Ofelia's taken the lesson to heart, to say nothing of del Toro--or us.

It comes down to what you decide the film is about--what, in fact, film itself might ultimately be about. There's telling stories, then telling stories with substance, then telling stories with resonance; and linking it all together, there's the promise of immortality once the story you tell is illuminated by the crackle of firelight. Still, Pan's Labyrinth is the kind of familiar that astonishes with our inability to imagine it better than the way del Toro has. Ofelia escapes into a fantasy-world (of her own creation or not, it's ours to decide--for the filmmaker's part, he's expressed that no element of the picture is a phantasm), led into a hedge labyrinth by an insectile pixie to speak with a faun (Doug Jones), who assigns the girl three tasks to prove her worthiness for inclusion in the faun's world. Del Toro's obsessions with insects and clockwork figure prominently in the piece (the latter coming into focus with Vidal's careful ministration of his dead father's pocket watch, a bit of ticking legacy he hopes to pass on to his unborn son)--likewise the director's interest in the underground and the fecundity of it as a signifier of both potential and the repressed. The first task has to do with confronting the beast in its belly, in the roots of a gnarled tree; the second with a candlelit banquet hall that imagines the Mad Hatter's tea party as something uniquely unstrung; and the third with the spilling of blood and the choice between the destruction or preservation of innocence. Ofelia is tasked with discovering her courage, her self-control, and her judgment as del Toro parallels her quest with Vidal's merciless persecution of guerrilla rebels and casual abuse of his servants and Ofelia's mother.

Each storyline complements the other without becoming confused; when the narratives converge in the final reel, they do so with sense and poetry. Vidal undermines Ofelia's attempts to save her mother, precipitated not just by the nature of his solipsism but by Ofelia's inability to manage her own appetites as well. And when Ofelia is given a chance at the end to explore again the ideas of sacrifice and selflessness (already embodied in the parallel of her nanny's loyalty to the insurgency), Pan's Labyrinth suggests that conscience--native, infant conscience--is the key to change. Though it couldn't be more different, the film shares its optimism with Michael Haneke's Caché, placing its faith in the next generation to rediscover, not invent, resourcefulness and the hopefulness to employ it to affect a more positive outcome. Pan's Labyrinth addresses the "sins of the father" not as a death sentence, but as an opportunity to correct what's been broken: the bridge from the Old Testament's antisocial savagery to the New Testament's covenant to honour civility in the body and suckling morality of a child. Easily del Toro's best film in a portfolio of fantastic pictures, it's timely and timeless (the foremost prerequisite of any useful parable); as beautiful and obscene as anything beautiful must carry the potential for; and as horrible and hopeful--often in the same breathless moment--as life can be. Del Toro's films are uncompromising and very much his own, and Pan's Labyrinth is a masterpiece. Originally published: December 29, 2006.