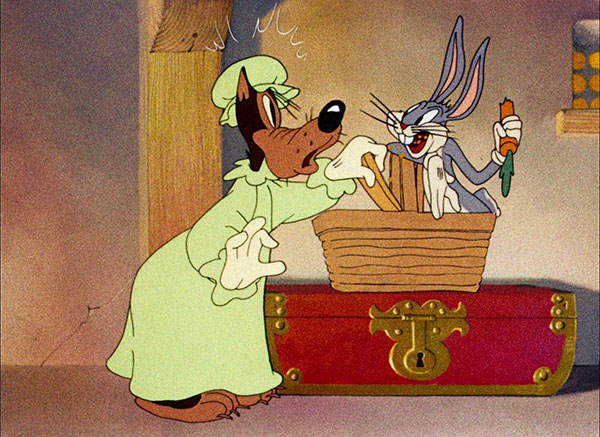 by Bill Chambers The Shrek movies dream of being this renegade. Little Red Riding Hood (a brilliant Bea Benaderet, using a halting squeal that suggests the '40s equivalent of uptalk) is on her way to Grandma's house with a picnic lunch: Bugs Bunny. The Big Bad Wolf gets there first, of course, though he has to kick other wolves out of Grandma's bed. (Where's Grandma? "Working [the] swing shift at Lockheed." Wartime audiences must've howled, pardon the pun.) When Red arrives, the Wolf can't hustle her out fast enough in his desire to eat Bugs, and both he and Bugs grow impatient with formal niceties as Red keeps interrupting the ensuing farce to try to fulfill her outmoded narrative function. Introduced belting out Glenn Miller's "Five O'Clock Whistle," this Red is a bobby-soxer by definition, and the combination of her cute figure and abject brattiness create a seductive-repulsive push-pull that is damn near Lolita-esque--honouring, in a roundabout way, the erotic component that is essential to any retelling of the original fairy tale. Red, for what it's worth, meets a less grisly yet somehow more subversive end here than she does at the hand of Charles Perrault; punchlines or "release gags," as they're called, weren't necessarily director Friz Freleng's forte, but this one's ingeniously grim and worthy of Tex Avery, whose style is emulated throughout. Unfortunately the Blu-ray and DVD releases offer no isolated audio for Little Red Riding Rabbit: As animation curator Andrew Farago posits in The 100 Greatest Looney Tunes Cartoons

, "what makes this cartoon stand head and shoulders above the 300-plus others Freleng directed is the music." Available on: Looney Tunes: Platinum Collection, Volume Three [Blu-ray]