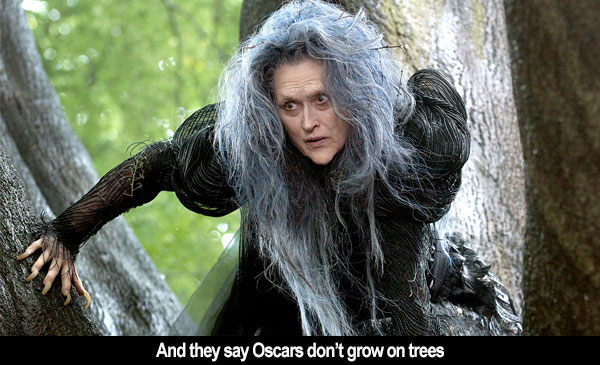 by Walter Chaw Into the Woods looks exactly like what a legendary Sondheim production would look like were it adapted by that idiot who made Memoirs of a Geisha into a Vegas drag space-opera dragged through a scrim of horrific Occidental Orientalism. (Well, at least to the extent that Memoirs wasn't that already.) It's gaudy in every pejorative connotation of the word, packed to the rafters with distracting, stupid, show-offy clutter of the sort that people accumulate when they fear they don't have substance without it. I rather liked Marshall's adaptation of Chicago, strangely enough, which speaks more to the un-fuck-up-ability of Kander, Ebb, and Fosse than it does to any latent modesty in director Marshall. Call it beginner's luck, perhaps, of the kind that has long since dissolved. Marshall has already exceeded all expectations for bloated suck by somehow making the Pirates of the Caribbean franchise more difficult to endure than it had been by the third film. I'd challenge that you could swap Into the Woods out for a print of The Imaginarium of Dr. Parnassus and no one would even frickin' notice. It's this year's Les Misérables.

For the uninitiated, Into the Woods will be complete cross-eyed badger spit. Think of it as the feature-length, live-action adaptation of "Fractured Fairy Tales" as a baker, conveniently named "Baker" (James Corden), and Baker's Wife (Emily Blunt) strike a deal with Witch (Meryl Streep) so that Baker's Wife can get knocked up. This leads to them walking around for a few hours (at least) in the titular woods, trying to collect Cinderella's (Anna Kendrick) glass slipper, Jack's (Daniel Huttlestone) cow, Rapunzel's (Mackenzie Mauzy) hair, and Little Red Riding Hood's (Lilla Crawford) red riding hood in the world's most boring scavenger hunt. Christine Baranski plays another variation on what she always plays--ditto Johnny Depp, in a quick run as the Wolf that instantly cements his position as the single most selfish actor in the industry. He doesn't steal scenes, he strikes poses. Remember when he was in Tim Burton's Sondheim adaptation? Sweeney Todd: The Demon Barber of Fleet Street is a work of real genius. What the hell happened?

Into the Woods (I think my screening of it is still running somewhere) then introduces an apocalyptic third act wherein its lessons about feminine actualization are supposed to flower, I think, but don't. At least there's Chris Pine as one of the princes Charming, who does the one vaguely pleasurable thing in the whole benighted exercise by going the full Shatner. It's only funny because it's meta in that broad Shrek way. Tracey Ullman gets to sing again for the first time since the '80s, I think, and none of it lands with a hint of design or emotion. Sondheim is a genius, undeniably. When Kendrick does that Elaine Stritch number from his "Company" in Camp, "The Ladies Who Lunch," my god it's amazing. It's the first time I saw her in anything and I was smitten then; I'm smitten still, but I hated her in this movie. I hated Emily Blunt in this movie. If it takes a tremendous director to pull remarkable performances from limited, uncharismatic actors, the opposite, surely, must also be true. It takes someone truly gifted to make Sondheim stupid.

The problem is that there's a lack of structure applied to a play that relies on its structure. "Into the Woods" is a high-wire act, a musical with as many disparate storylines as there are characters; Marshall is a bloviating literalist who doesn't understand the wit and satire of the material. Moments that should soar as Sondheim's carefully-laid traps are sprung one-by-one in an at-times-shockingly downbeat ending--one that suggests more the original Grimm fairy tales than their eventual Disneyfications--are defanged, made rudderless, misread. Marshall transmogrifies Sondheim's "Into the Woods" into Disney's Into the Woods. It's battling our familiarity with the source and then it's battling our familiarity with the Disney, true, but mostly it's battling Marshall's inability to find the thread and his tendency towards over-compensating flop sweat. He's constantly swinging for the fences, not realizing he's playing chess. Where Cinderella and Rapunzel and Baker's Wife should have converging resolutions--I mean, even the Giant's widow is acting out of grief (these are lives of desperation ending in abuse, ruined hope, sometimes death)--instead threads are left dangling and unresolved. Into the Woods is as random and graceless as it is bombastic. Marshall would be a better fit for an Andrew Lloyd Webber adaptation. I can't think of anything meaner than that to say about anyone.